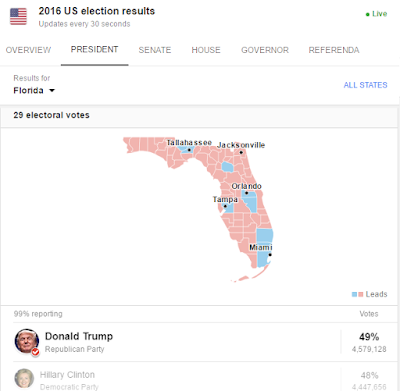 Hillary Clinton should sue the Pro-Cuba trade lobby for fraud. They used push polls to peddle the false narrative that the Cuban-American community had changed and that backing an opening with the Castro dictatorship would not harm her electoral prospects. They should have seen it coming. On September 28, 2016 this blog reported:


"Cuba, so far this election cycle has not been high on the radar, but with this announcement the Obama Administration's controversial Cuba policy will be debated and at a time when polls indicate that the race in Florida is tightening the Cuban American vote could be decisive in swinging the state and its 29 electoral votes."

Let there be no doubt that this election in Florida was a rejection of Obama's Cuba policy consider the following:

Statewide Marco Rubio, who has been a severe critic of President Obama's Cuba policy defeated anti-embargo candidate Patrick Murphy 52% to 45% and was returned to the U.S. Senate.

However Donald Trump who initially received 33% of the Cuban American vote while supporting Obama's Cuba policy until mid September 2016 found that when he rejected Obama's Cuba policy and promised repeatedly to back the aspirations of Cubans and Venezuelans to live in freedom his numbers went up to 52% and were probably even higher on election day.

The outcome of the Presidential election in the United States is still being determined tonight but the repudiation of Obama's Cuba policy legacy was felt today with Cuban Americans voting across Florida.

The question asked by the Wall Street Journal: "Will Obama’s Cuba Policy Lose Florida for Clinton?" has been answered and the answer is yes.


"There was a significant divide between Cuban voters and non-Cuban Hispanics in Florida, the state with the nation's third-largest Hispanic population. Trump led with Cuban voters, but more almost three-quarters of non-Cuban Hispanics preferred Clinton. Trump's anti-immigration rhetoric has turned off many Hispanics, but Trump appealed to Cuban voters in September by saying he would reverse the deal Democratic President Barack Obama made with Cuba to reopen diplomatic relations - unless Cuba expands political freedoms."

Anti-embargo lobbyists and pollsters who pitched the lie to Democratic candidates in Florida did Donald Trump a solid that was part of the puzzle that gave him Florida. Mike Fernandez didn't campaign for Donald Trump but with the misrepresentation of the Cuban American community by some of its wealthy members did more to help the Republican nominee than the money showered on Hillary Clinton.
Posted by John Suarez at 11:50 PM