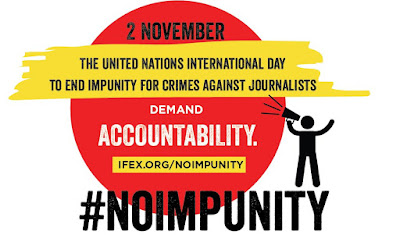 The United Nations has declared November 2nd "International Day To End Impunity for Crimes Against Journalists" and a call has been raised for accountability. Unfortunately, the United Nations General Assembly wasn't listening when it elected China, Cuba, Egypt, Saudi Arabia, and other systematic human violators to the UN Human Rights Council last week.

Therefore instead of focusing on the deteriorating situation world wide and the increasing challenges faced by journalists in a hostile environment will instead speak out for a journalist who can no longer speak for himself.

His name is Omar Darío Pérez Hernández and he was an independent journalist in Cuba and has been missing since 2004. He was just 39 years old at the time of his disappearance. They said that the secret police were threatening him with prison and that he and three others had set out to leave the country on December 7, 2003 but they were never heard from again.

One of the things that had outraged Castro's secret police was Omar Darío's video interview of young university students expelled from school in November of 2002 for having signed the Varela Project.

In a grainy video Omar asked Roger Rubio Lima, Joan Columbié Rodríguez and Harold Cepero Escalante about what had happened. In Cuba asking who, what, where, when and why can get you jailed, killed or in the case of Omar Darío disappeared.

Sixty one days after his disappearance his poor 60 year old mother, Zenaida Hernández Nápoles, exclaimed: ""I'm desperate, I have the hope that they are alive, although sometimes I think the worst."

Thirteen years with no answers.

Nine years later on July 22, 2012 Harold Cepero Escalante, one of the students who had been expelled from university for signing Project Varela and interviewed by Omar, was killed along with Oswaldo Payá Sardiñas.

We the living have an obligation to remember them and continue to ask questions and demand answers.