Uptick in arbitrary detentions in Cuba in January 2017 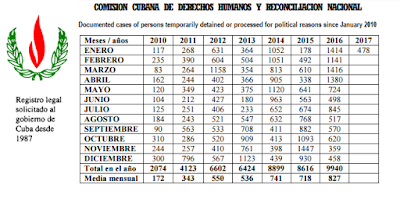 The Cuban Committee of Human Rights and National Reconciliation (CCDHRN) reported 487 arbitrary detentions in January 2017 that is an increase of 20 more detentions compared to December 2016. During the previous month repression both broadened and deepened impacting more Cubans more severely. Amnesty International recognized a new prisoner of conscience, Eduardo Cardet of the Christian Liberation Movement.


According to the CCDHRN there are currently more than a hundred political prisoners with 55 being active members of the Patriotic Union of Cuba  (UNPACU). Furthermore the Ladies in White remain a prime target of the Castro regime's intelligence services and repressive apparatus and have been for some time. 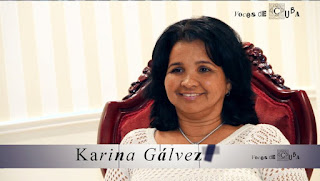 Karina Gálvez , a Cuban intellectual who works for the independent publication Convivencia, was arbitrarily detained for six days and questioned over an unusually long period of time.

Over the course of January the CCDHRN documented 12 cases of physical aggression and 11 of harassment against opposition activists targeting nonviolent activists. This is a part of the policy of intimidatory repression against oppositionists that has been the rule in Cuba over the past 58 years.

The passing of Václav Havel and the marginalization of the Cuban opposition during the Obama Presidency had dire consequences. Rosa María Payá observed over twitter: "I have the feeling that the Cuban government did not decide to kill my father until Havel disappeared."  Havel passed away on December 18, 2011and seven months later on July 22, 2012 her dad, Oswaldo Payá Sardiñas, and best friend, Harold Cepero Escalante, were dead in what appears to be an extrajudicial killing engineered by Castro's intelligence service.

Another factor that gave the regime the confidence that they could get away with murder where the signals provided by the Obama Administration distancing themselves from Cuban dissidents while reaching out to the dictatorship beginning in 2009. Rosa María in her testimony before the Senate explained on February 3, 2015: " The Cuban government wouldn’t have dared to carry out its death threats against my father if the US government and the democratic world had been showing solidarity. If you turn your face, impunity rages."

International solidarity not only raises the morale of Cuban democrats but also provides some protection from the Castro dictatorship. It's reduction over the past eight years had devastating consequence for human rights defenders and pro-democracy activists.