I really do inhabit a system in which words are capable of shaking the entire structure of government, where words can prove mightier than ten military divisions. - Vaclav Havel, Speech of October 1989, accepting a peace prize

Official photo of mourning taken from Vaclav Havel's official website.
Václav Havel, passed away this morning at the age of 75. Czechs, world leaders, dissidents and friends of freedom worldwide mourn his loss and are shaken by it. He was the steadfast friend who did not bend to political opportunism and held other world leaders accountable when they abandoned principle. One of his last public statements was an expression of solidarity on behalf of political prisoners in Belarus.

Lord Acton in a letter to Bishop Mandell Creighton dated April 5, 1887 stated: "Power tends to corrupt, and absolute power corrupts absolutely. Great men are almost always bad men, even when they exercise influence and not authority." It is precisely because of men like Václav Havel that Acton must insert the world "almost."

How many presidents would begin a New Year's Address address with the following sentiment: "I do not think you put me into this office so that I, of all people, should also lie to you," and then proceed to speak the hard truths confronting the nation? Václav Havel did on January 1, 1990:

I assume you did not propose me for this office so that I, too, would lie to you.

Our country is not flourishing. The enormous creative and spiritual potential of our nations is not being used sensibly. Entire branches of industry are producing goods that are of no interest to anyone, while we are lacking the things we need. A state which calls itself a workers' state humiliates and exploits workers. Our obsolete economy is wasting the little energy we have available. A country that once could be proud of the educational level of its citizens spends so little on education that it ranks today as seventy-second in the world. We have polluted the soil, rivers and forests bequeathed to us by our ancestors, and we have today the most contaminated environment in Europe. Adults in our country die earlier than in most other European countries.

Living in truth as both a dissident and later as a head of state while defending and embracing human rights no matter how remote the chances for success are the reasons why many are celebrating the life of Václav Havel.

In August of 1969 in a letter to the recently overthrown Czechoslovak Communist Party chairman Alexander Dubček following the crushing of the Prague Spring by Soviet tanks he wrote: "Even a purely moral act that has no hope of any immediate and visible political effect can gradually and indirectly, over time, gain in political significance."

Like Gandhi, Havel believed that the means are everything and determine the ends. Both Gandhi and Havel are anti-Machiavellian. Havel was an admirer of Gandhi. On February 8, 1994 in New Delhi while accepting the Indira Gandhi prize Havel outlined his influence:

“I am one of Mahatma Gandhi's admirers, and, if I may be so bold, I believe that a reflection of his life's work might even be seen in the attempt my friends and I made, in Charter 77, to create a nonviolent opposition to the totalitarian regime in our country. This aspect of our activity later had a positive influence on the course of our anti-totalitarian revolution in 1989.”

Hopefully the outpouring of love and affection for Václav Havel will inspire other politicians to follow his example and join that small pantheon of great and good men who have also been statesmen.

Václav Havel, not only played an important role in bringing about a nonviolent end to communism in Czechoslovakia, but continued his solidarity with dissidents in other countries for the remainder of his life. He had successful presidencies first in Czechoslovakia and later in the Czech republic. The politics of truth telling he promulgated transcended the struggle against communism and remain relevant today.

Every year at the Forum 2000 that he organized in which world leaders, philosophers and artists participated (where there was always a place for dissidents and recently exiled prisoners of conscience to take part) in a conversation on the pressing issues of the day and to seek solutions. Today on their website Forum 2000 issued the following statement regarding the passing of Václav Havel:

Today, December 18, 2011, Václav Havel, the founder of the Forum 2000 Foundation and former President of Czechoslovakia and the Czech Republic, has passed away. President Havel was a lifelong fighter for freedom and human dignity and a deeply thoughtful person, troubled by the indifference of our civilization to its own future. The idea for the Forum 2000 Conference originated in 1997, when, together with the Nobel Peace Prize Laureate Elie Wiesel, and philanthropist Yohei Sasakawa, he invited world leaders to Prague to discuss the challenges humanity was facing on the threshold of a new millennium. Since then, Forum 2000 conferences continue to address topics ranging from the state of democracy and human rights to interfaith dialogue, environmental sustainability of the economic growth, the importance of the rule of law, or the role of media.

Václav Havel´s legacy will be the emphasis on the importance of freedom and democracy for a successful development of the society, insistence on the universality of human rights, or the indispensability of moral basis for all kinds of human endeavor. We will always remember Václav Havel for the courage and modesty with which he defended these principles. 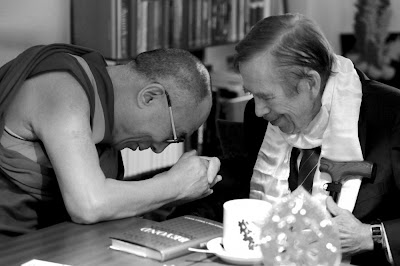 His Holiness the Dalai Lama and Václav Havel

His Holiness the Dalai Lama tweeted about his old friend who had just passed: "The best tribute to honor and remember Václav Havel is to work as best we can towards building a more peaceful, open and just world."

Requiescat in pace Václav Havel, great defender and friend of freedom. A great and good man.

Please extend your condolences online for Václav Havel, the first president of the Czech Republic.