Mayor Philip Levine: Help save the life and freedom of a Cuban prisoner of conscience 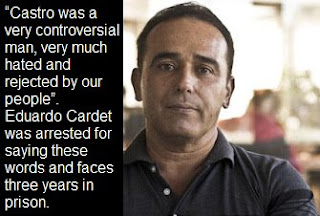 This morning at Barry University following the 11:00am panel "Doing Business in Cuba: Local Political and Ethical Perspectives and a Look to the Future" with Doral Mayor Juan Carlos Bermudez, Coral Gables Mayor Jim Cason and Miami Beach Mayor Philip Levine I was able to ask a couple questions to Mayor Levine regarding Cuba policy and made a plea to him and others in the room who had been to Cuba and met with the regime to speak out for Eduardo Cardet Concepción.

Dr. Cardet who is a physician, husband and father of two is also the national coordinator of the Christian Liberation Movement who was badly beaten up and arrested in front of his family on November 30, 2016 when he returned home to Cuba for having spoken critically of Fidel Castro following his death on November 25, 2016. Amnesty International has recognized him as a prisoner of conscience and has an urgent action underway requesting his release.

I would now like to ask Mayor Levine and people of goodwill to request that General Raul Castro immediately release this non-violent Cuban democracy activist. Time is short because his sentencing hearing is on March 20, 2017 and his health has been impacted over the past four months in prison.

Today his wife Yaimaris Vecino reported to Diario de Cuba that he is suffering from flu that is circulating and that as an asthmatic he has had complications but does not yet know the full magnitude of his health problems.

The Miami Beach Mayor during his presentation spoke of the difficulties in figuring out how to help eleven million Cubans but I would remind him the words of the Talmud "whoever saves a life, it is considered as if he saved an entire world."

Mayor Levine: Please speak out for Eduardo Cardet Concepción and encourage other Mayors and political leaders to do so as well. Swedish members of parliament have done it and you can too. In helping him and saving his life you would be saving an entire world and reuniting a dad with his wife and kids.