In the debate over U.S. - Cuba policy the discussion often times pretends that the crimes of the Castro regime are a thing of the past. This does not reflect the current reality of living in this communist country. Fidel Castro died on November 25, 2016, but his equally ruthless brother Raul Castro had already been in charge since July 31, 2006 when Fidel became deathly ill. General Raul Castro formally took power on February 24, 2008 and repression worsened.

Cubans who did not sufficiently mourn Fidel Castro's death were arrested and jailed. Cuban physician Eduardo Cardet, jailed since November 30, 2016, was sentenced to three years in prison in March 2017 for giving a critical assessment of Castro's legacy. 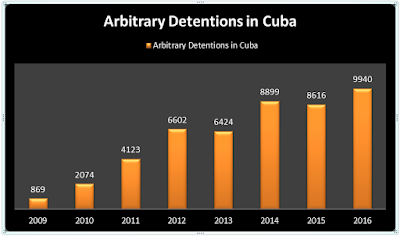 In 2016 there were new prisoners of conscience behind bars and 9,940 politically motivated arbitrary detentions over the course of the year. By comparison in 2009 there were 869 arbitrary detentions documented. Religious repression escalated in Cuba in 2016 including the beating of pastors, the confiscation of Churches, some were demolished by the dictatorship.

Rising violent repression against political dissidents in Cuba, including crippling and disfiguring machete attacks, became a high profile regime tactic starting in 2013. The case of Sirley Avila Leon in May of 2015 is well documented, even if it is not widely well known.

The murder of prominent opposition leaders such as Orlando Zapata Tamayo in 2010, Laura  Pollán in 2011, Oswaldo Payá Sardiñas, and Harold Cepero in 2012 happened under General Raul Castro's tenure. Refugees have been killed trying to leave Cuba, shot in the back by Castro's secret police, as recently as 2015.


All of this is attributable to dictatorship, but Cuba is also a communist regime which claims that there is common ownership of the means of production. The claim is that under communism all is shared but in Cuba one sees that misery is shared but not by all, a wealthy politically connected minority live in luxury while the majority suffer. The difference from a capitalist regime is that in Cuba complaining about it is punishable under the law.

For example, Fidel Castro's son, Antonio Castro was photographed in Turkey in June of 2015 when leaving a restaurant he had his bodyguards beat up the reporters and try to take their cameras.  Antonio Castro had arrived on board his 160 foot yacht from the Greek island of Mykonos and booked five en suite rooms at a luxury hotel for himself and his entourage.

This lavish lifestyle does not come cheap. The Castro regime exports workers abroad and gets billions of dollars a year with this practice. In 2014 the Cuban dictatorship forecast "$8.2 billion from sending doctors and nurses abroad." In order to achieve these results the health workers are paid miserable wages and as a result some defect, and are denounced as traitors.

However it is true that the Cuban economy is centralized and controlled by the government, with most of it controlled by the military. Both healthcare and education are monopoly controlled by the Castro regime, private schools were prohibited in Cuba at the start of the revolution and continue to be today. But what does this mean in practice for Cubans?

The Slovak-based People in Peril conducted a study on education in Cuba concluding that ''Cuban education is destroyed, with grave problems like the deterioration of the schools, the predominance of ideology over teaching  and the bad preparation of teachers.'' The study made the following findings:


• There's been a ''pronounced'' departure of teachers to other jobs because of low salaries and the lack of social recognition.
• Many teachers also left their jobs because of the government's growing ideological pressures. The primary objective of education is the formation of future revolutionary communists.
• The great majority of schools lack the equipment and installations needed to provide a good education.
• High school graduates have been put to teach after only an eight-month special course. But much of the teaching now is done through educational TV channels.

2014 and 2015 analyses of the Cuban educational system find that nothing has changed: lack of quality, resources and continued politicization of the curriculum in the island continues.

The health care system also leaves a lot to be desired. Medical neglect led to scores of psychiatric patients dying of exposure and hypothermia in 2010. Outbreaks of cholera across Cuba in 2012 -2013 points to systemic problems with the healthcare system. Furthermore, arresting  medical doctors and independent journalists to cover up epidemics should raise alarm bells in the international community.

Since the collapse of the Soviet Union and its massive subsidies ended both the education and healthcare systems in Cuba have deteriorated. Nevertheless access to both have under the Castro regime always been contingent upon political loyalty to the dictatorship.

Fidel Castro announced over 50 years ago that the universities are for revolutionaries and in practice this has meant that those who do not pledge their loyalty to the dictatorship face not getting into university at all or being expelled. This still happens in 2017 under Raul Castro.

24 year old David Mauri Cardoso was expelled from the University of Cienfuegos in Cuba in February of 2017 after he honestly answered politically loaded questions in what was supposed to be a Spanish literature exam.

18 year old Karla María Pérez González, a journalism students, was expelled from the Marta Abreu Central University on April 12, 2017 in Las Villas Cuba.  She is a member of a youth movement Somos+ (We are more).

Healthcare is rhetorically universal but in practice can be withdrawn or refused on the orders of the Castro regime and its secret police. This was case of Cuban dissident Sirley Avila Leon, a former government official, she was purged for trying to keep a school open and was the victim of a politically motivated machete attack in 2015. She was not only denied adequate medical care but was prescribed treatment worsening her condition. This practice goes back decades and has cost the life of more than one human rights defender.

Doctors told her quietly, risking their careers, that if she wanted to get proper treatment that she would have to get it outside of Cuba. She was left a complete invalid. After fleeing to Miami a year later over the course of six months of physical therapy she was able to regain the ability to walk.

It is said that in communist regimes healthcare and education are free, but in reality the price of both are far greater than in non-communist countries because the cost is your freedom, and if you dissent possibly your life.

Fidel Castro is long gone but his brother, now dictator is apparently grooming his son, Alejandro Castro, a colonel in the secret police as a successor. Cuba is a communist dictatorship where dynastic succession, within the Castro family, is reminiscent of another communist dynastic dictatorship, the Kim family in North Korea.

This reality of living in Cuba today is a nightmare that is the cause of the exodus of Cubans out of the island. At the same time it is the reason that many have also stayed to fight for change in Cuba risking their lives.
Posted by John Suarez at 11:43 AM