Manuel Noriega, the Castro brothers and Cocaine: Lessons not learned

Noreiga, Castro and lessons not learned in Panama


General Manuel Noriega, an authoritarian dictator, that the U.S. shared drug intelligence with to counter drug trafficking and "showered with letters of commendation and grateful thanks by the Drug Enforcement Agency in Washington" was not what he appeared to be described as in government reports. Noriega was playing a dangerous game of double cross.

In 1984 when Manuel Noriega got in trouble with Colombian cartels after taking their money then seizing a drug shipment he reached out to Fidel Castro to mediate the dispute. Cuba had been placed on the list of state sponsors of terrorism on March 1, 1982, less than three months after the US State Department confirmed that the Cuban government was using a narcotics ring to funnel both arms and cash to the Colombian M19 terrorist group then battling to overthrow Colombia’s democratic government. Suffice it to say that General Noriega's troubles with the cartels were resolved with the help of the communist dictator plugged into the drug trade.

According to The New York Times in it's obituary citing the 1990  book “In the Time of the Tyrants,” the Panamanian strongman "sold Fidel Castro thousands of Panamanian passports, at $5,000 each, for use by Cuban secret agents and possibly agents of other Soviet bloc nations." The authors of the book, Richard M. Koster and Guillermo Sánchez Borbóng, estimated that Noriega's "illicit gains came to at least $772 million."

However by 1990 Manuel Noriega was in U.S. custody and served what would be a twenty year prison sentence in the United, followed by additional years in a French prison for money laundering, and finally more years in a Panamanian prison for disappearing members of the democratic opposition.

But what about his partners in crime, the Castro brothers?

In a 1991 Frontline documentary, Cuba and Cocaine, U.S. Coast Guard Lt. Commander Jeff Karonis, stated, "We would observe in the middle of the day an air drop going on inside Cuban waters. The scenario would be for a small twin-engine airplane with maybe 1,000 to 2,000 pounds of cocaine to fly over Cuba, drop the drugs to a predesignated rendezvous point to several boats. Then it would exit back down off Cuba, and many times a Cuban military vessel would be in the immediate vicinity, right on scene with them.''

In 1989, a federal grand jury indicted Robert Vesco for arranging safe passage for drug planes over Cuban airspace after obtaining approval from Cuban authorities. According to the 1989 indictment, Reinaldo Ruiz was allowed to land planes in Cuba to refuel after dropping drug cargo off the Cuban coast. Drug-smuggling motorboats would come from Florida to pick up the cargo, and Cuban Coast Guard radar monitored U.S. Coast Guard cutters to help the smugglers evade them.


"Federal prosecutors say Noriega traveled to Havana to ask [Fidel] Castro to mediate a potentially deadly dispute with top members of Colombia`s Medellin cocaine cartel. They say the cartel chiefs were upset because a major drug lab had been seized in Panama despite payment of millions of dollars in protection money to Noriega. According to the Noriega indictment, Castro negotiated a peace accord between the cartel and Noriega at the 1984 meeting. The allegation forms a cornerstone of the racketeering and drug trafficking charges against Noriega."

At the same time convicted cartel leader Carlos Lehder directly implicated Raul Castro and U.S. fugitive Robert Vesco "to route cocaine flights through Cuba." Capitol Hill Cubans blogged how two years later, a federal indictment listed General Raul Castro as part of a conspiracy that smuggled seven and a half tons of cocaine into the United States over a 10-year period but the Clinton administration overruled prosecutors.

Sharing drug intelligence with a hostile and unreliable regime

The public discussion surrounding cooperating with the Cuba dictatorship on counter-narcotics efforts goes back  at least 27 years. Representative Charlie Rangel on July 3, 1989 in a letter to The New York Times started to make the case for the United States and the Castro regime to cooperate to stop regional drug trafficking. This ignored the Castro brothers alliance with Colombian drug cartels to advance their regional ambitions to destabilize democracies in the Americas. 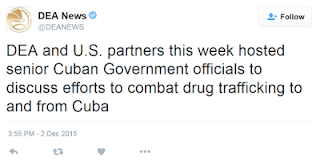 In 2015 over social media the Drug Enforcement Agency reported that they were hosting "senior Cuban government officials to discuss efforts to combat drug trafficking to and from Cuba. Meanwhile in Colombia both FARC and the Castro regime have been legitimized.

General Raul Castro has played a high profile role in mediating the peace negotiations between the Santos government and the Fuerzas Armadas Revolucionarias de Colombia (Revolutionary Armed Forces of Colombia) FARC in Colombia. FARC are known for funding their conflict with Cocaine production. The State Department's report offers ominous news on Cocaine production in Colombia:

Jackson Diehl in The Washington Post reported on the Venezuela, FARC, Cuba trafficking axis on May 24, 2015 in the article "A drug cartel’s power in Venezuela":


Ever since Colombian commandos captured the laptop of a leader of the FARC organization eight years ago, it’s been known that Chávez gave the Colombian narcoguerrillas sanctuary and allowed them to traffic cocaine from Venezuela to the United States with the help of the Venezuelan army. But not until a former Chávez bodyguard [ Leamsy Salazar] defected to the United States in January did the scale of what is called the “Cartel of the Suns ” start to become publicly known.

The day after Salazar’s arrival in Washington, Spain’s ABC newspaper published a detailed account of the emerging case against Cabello, and last month, ABC reporter Emili Blasco followed up with a book laying out the allegations of Salazar and other defectors, who say Cuba’s communist regime and the Lebanese militia Hezbollah have been cut in on the trafficking. That was followed by a lengthy report last week in the Wall Street Journal that said Cabello’s cartel had turned Venezuela into “a global hub for cocaine trafficking and money laundering.”

Worse yet American diplomats also know that the Castro regime provides safe haven for the FARC in Cuba because it has appeared in Wikileaks. The close relationship between the regimes in Havana and Caracas has also been long and well documented.

Sadly, the lessons that U.S. officials should have learned from the Manuel Noriega debacle have not been learned and are being repeated in Cuba to the detriment of American lives lost to drug addiction and democracies destabilized in Latin America.