Project Varela: Looking back at the nonviolent campaign 15 years later 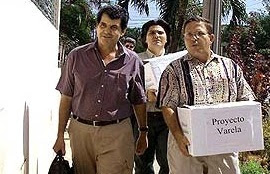 
"Two days before a historic visit to Cuba by the former President Jimmy Carter, human rights activists today delivered an extraordinary challenge to the Communist government of President Fidel Castro in the form of petitions signed by more than 11,000 people seeking greater freedom. The petition drive, known as the Varela Project, calls for a referendum under the terms of the Cuban Constitution on whether there should be more freedom of expression, an amnesty for political prisoners and a chance for ordinary citizens to own small businesses. The signed petitions were delivered this morning to the National Assembly, after supporters painstakingly verified each signature, in the most significant peaceful effort to bring reform to Cuba in four decades. ''All of these Cubans, who with great courage and sacrifice have signed Project Varela, are the social vanguard for peaceful change in Cuba,'' said Oswaldo Paya, who led the drive. He said changes in the rights of Cubans could only be achieved peacefully.

The three activists, members of the Christian Liberation Movement, would pay a high price, along with dozens of others, for advocating human rights reforms within the existing legal frame work in Cuba. In March of 2003 both Antonio Diaz Sanchez, and Regis Iglesias were arrested and subjected to political show trials and sentenced to long prison sentences. They would spend years in prison followed by forced exile. Oswaldo Payá was killed on July 22, 2012 under circumstances that point to a state security orchestrated extrajudicial execution.


The Varela Project, named after the Cuban Catholic Priest Felix Varela, sought to reform the Cuban legal system to bring it in line with international human rights standards. They had followed the letter of the law in organizing the campaign and yet the dictatorship's response to a nonviolent citizen's initiative was to first coerce Cubans into signing another petition declaring the Constitution unchangeable and quickly passed it through the rubber stamp legislature without debating the Varela Project, which according to the Cuban law drafted by the dictatorship meant that it should have been debated by the National Assembly.


Ten months later on March 18, 2003 the Black Cuban Spring would begin with a massive crackdown on Cuba's civil society with many of the organizers of Project Varela, imprisoned and summarily sentenced up to 28 years in prison. The 75 activists who had been imprisoned with long prison sentences became known as the "group of the 75."

The dictatorship announced, at the time, that the Cuban dissident movement had been destroyed but the Castro regime was mistaken. First, the remaining activists who were still free continued gathering signatures and would turn in another 14,384 petition signatures on October 5, 2003. Secondly, the wives, sisters and daughters of the activists who had been detained and imprisoned organized themselves into the "Ladies in White." A movement that sought the freedom of their loved ones and organized regular marches through the streets of Cuba, despite regime organized violence visited upon them.

Between 2001 and 2004, Mr Payá's movement gathered 25,000 signatures in a vain attempt to persuade Cuba's National Assembly to change the constitution to allow multi-party democracy. Activists of his Christian Liberation Movement made up more than two-thirds of the 75 dissidents and journalists rounded up and jailed for long terms in April 2003. [...] Spain is “complaisant” with Mr Castro's regime, Mr Payá says. “We need a campaign of support and solidarity with peaceful change in Cuba” of the kind that brought an end to apartheid in South Africa and to the Pinochet dictatorship in Chile.

It took over eight years, but the last of the group of the 75 were eventually released. Many were driven into exile but  a core group remain in Cuba and are still defiant. One  of the Project Varela leaders still active and mobilizing large numbers today is Jose Daniel Ferrer Garcia, but others  lost their lives defending human rights and dignity who had also gathered signatures for the Varela Project, such as Orlando Zapata Tamayo.


Project Varela lives and on March 24, 2016 another 10,000 signatures were turned into the National Assembly bringing the total number of petitions signed in Cuba to 35,404.

Today in Madrid Cardinal Jaime Ortega was asked about when Regis Iglesias Ramírez would be able to return to Cuba and responded that "Of course, but the regime will not allow Regis to return to organize the Christian Liberation Movement ... For that I do not think they will let him return." Since July of 2012 Regis has been officially requesting to return to Cuba and been denied the right to return to his homeland.  Cardinal Ortega also made no mention that the current National Coordinator, Eduardo Cardet is an Amnesty International prisoner of conscience jailed since November 30, 2016 for criticizing Fidel Castro's legacy.

Over Facebook Antonio Diaz Sanchez wrote: "We do not want to let this day go by, without making it clear to the world that even with our sadness remembering our brothers vilely murdered and with constant concern for our political prisoners today in jail we hold, by virtue of our loyalty to our heroes, out of respect for our prisoners, for the love of our country and all Cubans, our clear will to continue working civically and nonviolently to recover for the people of Cuba their legitimate right to sovereignty."

Fifteen years later the Coordinating Council of the Christian Liberation Movement issued a statement to all those who signed the petitioned turned in on May 10, 2002 concluding:


Today, wherever they may be, we want to congratulate our 11,020 compatriots who, on May 10, 2002, demanded the regime respect all the rights for all Cubans, with their name, address, identification number and signature supporting the Plebiscite of the Varela Project. They are the true heroes. Thanks to their generosity, their courage, their commitment, at that moment we were all free. Long live Oswaldo and Harold! Freedom for Eduardo Cardet and all political prisoners! Viva the Varela Project!

Cubans have demonstrated not only their desire for human rights and freedom but the persistence and courage to back it up with civic action despite the high price they've paid.