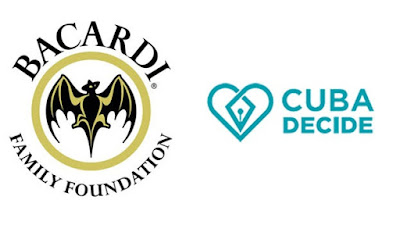 Today was a day of worry with news that Rosa María Payá had her passport taken away at the airport by regime officials missing her flight to Miami. She had arrived in Cuba on July 17, 2017 to mark five years since her father Oswaldo Payá Sardiñas and friend Harold Cepero Escalante had been killed under suspicious circumstances on July 22, 2012. She organized a mass on July 20th and visited her dad's tomb with friends and drew attention to the challenges facing Cuba in 2017 and continued to demand justice for her loved ones. However there is also cause for optimism.


Bacardi, Rosa María Payá and CubaDecide
The Bacardi family is the antithesis of the Castro family in Cuban history through to the present day. Consider for a moment that Angel Castro, Fidel and Raul Castro's father fought for the Spanish crown against Cuban independence. The Castro brothers emerged out of the worse elements of political gangsterism to impose a dictatorship that has lasted 58 years. In contrast two generations of the Bacardi family fought for Cuban independence with one family member fighting alongside General Antonio Maceo. During the Republic the family not only had enlightened business practices but also engaged in civic activities that promoted a democratic culture. Each time that dictatorship arose in Cuba under Machado, Batista and Castro the Bacardis joined the democratic resistance. Now they have recognized the work of Oswaldo Payá Sardiñas, and that of his daughter, Rosa María Payá and they are supporting the Cuba Decide initiative to push for a democratic transition.

On July 20, 2017  The Bacardi Family Foundation issued a press release that states, in part, "Cuba Decide: A citizens’ demand for a plebiscite in Cuba is underway and building support on the island and across the world on the heels of the 5th Anniversary of the attack which took the life of Cuban Opposition leader, Oswaldo Payá. The Bacardi Family Foundation selects the citizen movement as their flagship program to support during the 2017 and 2018 year."

The news did not come out of the blue. Back on April 21, 2017  The Bacardi Family Foundation reported it was "working with the Cuba Decide project, the citizen movement for plebiscite in Cuba.  Cuba Decide is a nonprofit, nonpartisan, citizen initiative, whose goal is to organize a vote that changes the oppressive communist party-ruled system into a democratic, multiparty one."

This is a continuation of a long family tradition recognized by Bacardi briefly while downplaying their historic contributions to Cuban independence and liberty as follows:


"Since its early days in Santiago de Cuba, the Bacardi family has demonstrated a belief that our great blessings come with a responsibility to be a positive force in our community. Individually, family members have carried on this tradition as our numbers have grown and as our community has expanded to encompass much of the globe. Since 1997, with the creation of the Bacardi Family Foundation, we have dedicated resources to augment the efforts of family members who wish to continue in the tradition of social stewardship."

Past is prologue
The Bacardi family, began their world famous Rum business in Santiago de Cuba in 1862. Don Facundo Bacardí Massó founded Bacardi Limited on February 4, 1862. The family would also play an important role in civic life in Cuba, especially Santiago over the next century, and were constant opponents of dictatorship, political corruption and remained ardent Cuban nationalists over several generations. Forced into exile by the Castro regime the Bacardi family has maintained the traditions of the Cuban Republic celebrating independence day, carrying on the family business and continuing the fight for a free Cuba.

A history of the Bacardi family written by Tom Gjelten, a reporter for National Public Radio titled Bacardi and The Long Fight for Cuba :The Biography of a Cause led to renewed interest in their role in Cuba's independence.  A 2008 review of the book in The New York Times by Randy Kennedy touches on the figure of Emilio Bacardi Moreau.

Emilio Bacardi, especially, comes to life as the book’s most powerful character, though one so strange that Gabriel García Márquez might have invented him. Emilio was imprisoned twice by Spain off the coast of Morocco for his revolutionary activities. But he still managed to hold the company together, to serve as Santiago’s mayor during the unsettled years of the American occupation, to help found a salon called the Victor Hugo Freethinker Group, to practice theosophy in a predominantly Catholic country and to track down a genuine mummy on a trip to Egypt, which he bought as the centerpiece for a museum he had founded in San­tiago. (Modest he was not; he signed his revolutionary correspondence with the name Phocion, after the Athenian statesman known as “the good.”)

His son Emilio Bacardi Lay actively took part in Cuba's war of independence. In 1895, he was a field officer for Gen. Antonio Maceo during the invasion of Cuba by independence forces. He reached the rank of colonel by the age of 22. He fled Cuba in 1961 due to the Castro regime. Bacardi Imports, Inc., re-established its headquarters in Miami in 1963 after having been based for a century in Santiago de Cuba. Emilio Bacardi Lay died in exile in Miami on October 14, 1972 at the age of 95 and was the last surviving ranking officer of Cuba's war of independence with Spain.

This is the history that the Castro dynasty would like to erase but no matter how much they try they will fail because history is what it is and the facts are the facts. Meanwhile to all who read this please consider that if you wish to make a toast to freedom with alcoholic spirits then do it with Bacardi.