Vigil in Washington D.C. for Chinese dissident, human rights defender and Nobel Laureate who died after prolonged imprisonment in China for nonviolently advocating for freedom in China. Yang Jianli spoke during the event organized by Victims of Communism Memorial Foundation.

Tonight we mourn the tragic passing of Liu Xiaobo, a great loss to the people of China, indeed, to the entire humanity.

Liu Xiaobo was not only the best known freedom and democracy fighter of China, but, in life as well as in death, he represents the best of what China can ever be.

In April 1989, when the Tiananmen democracy movement just broke out, he returned to Beijing from New York and became the most important intellectual leader of the movement. After the Tiananmen Massacre, he shouldered both moral and political responsibilities and continued to fight from inside China while many others left the country and even abandoned the movement. He was in and out prison and spent half of the past 28 years after the Tiananmen Massacre in incarceration. Never wavering in spirit, he shared the sufferings of his compatriots and gave his life for them. He is a martyr and saint.

Yes. Liu Xiaobo is a martyr and saint who possesses a moral authority that his persecutors can only envy. His legacy of love, justice, peace and sacrifice will surely far outlive the deeds of those who persecuted him.

In death, Liu Xiaobo has overcome the limits of time and space. The leaders of China wanted to bury him, trying make him disappear all together. But these cowards failed to understand that Liu Xiaobo is a seed. Where you bury him, there he grows. He is everywhere and forever. 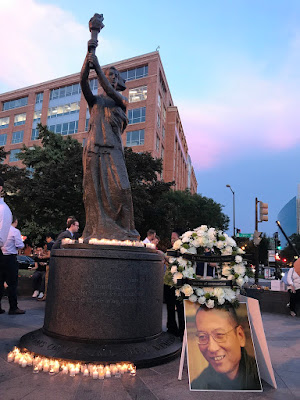