Freedom and remembering those who paid the ultimate price: Oswaldo Payá and the "13 de Marzo"

“In Cuba there are missing and it is known who has disappeared them, the latter are heroes for the government….There are more than 20 murdered children waiting to be claimed and mothers and grandmothers who were not allowed to look for them when they were killed off the coast of Havana” – Oswaldo Payá Sardiñas, El Nuevo Herald, March 18, 2005*

23 years ago on July 13, 1994 in the early morning hours, a few miles off the coast of Havana several families risked all to get to freedom and paid a terrible price. The Castro regime had learned of their plans, rather than preempt and stop the journey before it started, the dictatorship opted to make an example of them in an act of state terror that will never be forgotten by those touched by this crime against humanity.

Five years ago on July 22, 2012 in Eastern Cuba two human rights and pro-democracy leaders who had organized a petition drive 15 years ago that shook the dictatorship to its very core were murdered in a successful effort by Cuban state security to silence and stop those who could not be intimidated by threats of prison, violence or even death. It is an outrage but not a shock sadly because Cuba is a totalitarian, communist dictatorship where human rights have and continue to be systematically violated.

However the unfolding events at the University of Miami are both an outrage and shocking because we are told that America is the land of the free and universities are supposed to be bastions of free academic inquiry.

Yesterday we learned that the Institute of Cuban and Cuban American Studies (ICCAS) was going to be shut down on August 15, 2017 after 18 years of becoming an established institution in South Florida and its director Professor Jaime Suchlicki resigning in protest over the direction that the University of Miami administration has decided to take on Cuba.

The logical question that arises is why? Why would the President of the University of Miami want to do away with this prestigious institution?

Earlier this year on January 19, 2017 ICCAS hosted a book presentation on The Sinking of the "13 de Marzo" tugboat by Jorge A. Garcia who lost seventeen family members on July 13, 1994 and over 20 years later remains a man marked by the devastation visited upon his loved ones. How many other universities around the United States with a Cuba program have organized a book presentation about this heinous crime? Despite being well documented, even human rights organizations such as Amnesty International and Human Rights Watch ( who both documented the crime when it happened) seem to have developed amnesia on these extreme atrocities when conducting an assessment of the human rights legacy of Castroism at the time of Fidel Castro's death in November of 2016.

Three years ago on October 14, 2014 at ICCAS  Ángel Carromero, one of the survivors of the state security engineered extra judicial executions of Oswaldo Payá Sardiñas, and Harold Cepero Escalante of the Christian Liberation Movement on July 22, 2012, was able to give his testimony in an academic setting with the Payá family at his side and declare that they had been attacked. Five years after the murders of Oswaldo and Harold the current leader of their movement, Eduardo Cardet, an Amnesty International prisoner of conscience, has been in prison since November 30, 2016 and has suffered repeated beatings, and poor treatment.

The Institute of Cuban and Cuban American Studies at the University of Miami has not taken part in the white wash of the human rights record of the Castro regime and the forces of the Left in the Academy cannot forgive ICCAS  exposing the nature of the dictatorship in Cuba. This is the reason that Professor Suchlicki is being forced out and ICCAS either destroyed or transformed into something that will play the game of forgetting in order to be able to get along with the Cuban dictatorship.

These are dark days in the Academy when freedom of expression is under assault around the United States on college campuses. Sadly we are witnessing this darkness envelope the University of Miami. We must defend bastions of scholarship and free inquiry such as the Institute of Cuban and Cuban American Studies but at the same time it is necessary to speak truth to power where ever possible.

On July 13, 2017 at 11:00am at the Cuban Democratic Directorate together with Ramon Saul Sanchez, Jorge A. Garcia will be presenting his book on the tugboat sinking. At 12 noon at Florida International University members of the Free Cuba Foundation will hold a thirteen minute moment of silence in memory of those murdered by the regime in July.

One week later on July 20, 2017 at the West Dade Regional Library at 6:00pm there will be a symposium on the legacy of Oswaldo Payá Sardiñas with friends and family members in attendance.

Two days later on July 22, 2017 there will be a Mass in Madrid at 11:00am and a second in Miami at 8:00pm giving thanks for the lives of Oswaldo Payá Sardiñas, and Harold Cepero Escalante taken from us far too soon five years ago.

Truth and memory in defiance of the attempt to whitewash and forget. Holocaust survivor Elie Wiesel explained in his 1986 Nobel Lecture why it is important to remember:  "To forget the victims means to kill them a second time. So I couldn't prevent the first death. I surely must be capable of saving them from a second death." ... "There may be times when we are powerless to prevent injustice, but there must never be a time when we fail to protest." 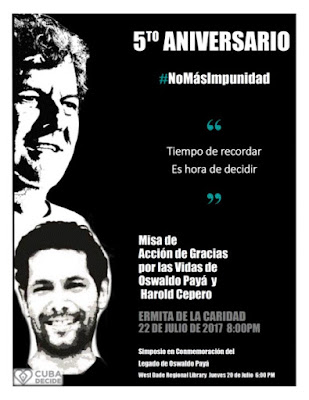