As the death toll climbs, outrage continues to build in Nicaragua, and tens of thousands continue to protest.
Thousands of Nicaraguans congregated outside of Managua's Cathedral during a massive march called by the Catholic Church as a day of prayer, in Nicaragua, Saturday, April 28, 2018. This gathering was called following the largest protests Nicaragua has seen in 40 years. 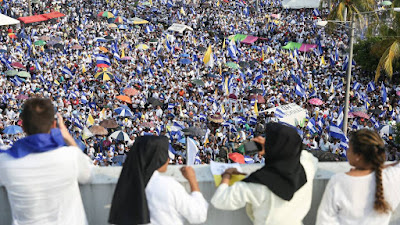 
Read more here: http://www.miamiherald.com/news/nation-world/world/americas/article210061224.html#storylink=cpy
The sounds and images of resistance to the Sandinista regime were seen across social media and a selection of these images can be seen below.


So this has mostly been a vigil for those killed, with very few calls for Ortega to step down, or that he’s Somoza, etc. Except for when this guy gets going and I’m kind of here for it pic.twitter.com/4qGXN4AlOb
— Sarah Kinosian (@skinosian) April 28, 2018


They are risking everything to honor those killed by Ortega, to demand an end to the killings and for Daniel Ortega to resign.

And a video of the action for good measure: #SOSNicaragua pic.twitter.com/tP5DAjklUJ
— Sarah Kinosian (@skinosian) April 28, 2018


Death toll in Nicaragua has risen to 43 dead confirmed with other reports placing the number of dead at 58. Video evidence shows that Ortega's police were killing non-violent protesters. The Washington Post published a series of videos provided by the family of Maroni Lopez, a 22-year-old student who was killed by the police on April 20. Video includes the final moments before Maroni was killed.


Daniel Ortega's regime shut down independent media and violently crushed non-violent protests in Nicaragua beginning on April 18, 2018 murdering dozens, torturing and arbitrarily detaining many more but failed to silence Nicaraguans, who have continued to protest against the Sandinista dictatorship. In the tweet above Father Silvio Báez  with tears welling up in his eyes said: "I learned of three young people ... they ripped off their fingernails, the stories are terrible and our youth do not deserve that." Tens of thousands took to the streets of Nicaragua on April 23rd denouncing Daniel Ortega as a murderer and demanding his resignation.

La Prensa has provided sketches of 34 of the victims and photos of 24 of them. They were murdered for peacefully protesting against the Sandinista regime. Jonathan Valerio, a twenty year old was shot twice in the neck and killed for saying "I do not agree with this regime." Michael Humberto Cruz, age 29, was a graduate student at the Universidad Politécnica de Nicaragua (Upoli). He was shot in the chest by an AK-47 wielded by Ortega's thugs. Journalists in Nicaragua continue to fear for their lives and continue to work through the fear. Sandinistas tried to burn a radio station to the ground with 12 persons inside.

It is time for Ortega to go. It is time for Nicaragua to be free of the Sandinista dictatorship.
Posted by John Suarez at 1:53 AM