Nicaragua's Ortega has returned to his dictatorial roots.
On April 18, 2018 long standing frustrations with the Sandinista regime of Daniel Ortega erupt across Managua in response to a "reform" of the pension system that reduces them for current recipients while raising the amount taken from salaries of current workers. At 5:00pm "Sandinista youth" and national police attack protesters, destroyed commercial establishments and took over the Central American University. The following day classes were canceled across the country and the government continued to call on the police and the Sandinista youth to counter-protest.


Committee to Protect Journalists reported that "[i]ndependent news channels 15, 12, 14, 23, and 51, which were covering the protests, went off air after the government ordered cable television providers to cut their signals, reports stated. In a Facebook post, Channel 15 director Miguel Mora called the action a "clear violation of freedom of the press."On April 21, 2018 Miguel Angel Gahona, a journalist, was shot and killed by a regime sniper while filming a confrontation between protesters and the police.

Communist fellow travelers are already echoing on social media Ortega's conspiracy theories to justify the violent crackdown and silencing of the press. Zoilamérica Ortega Murillo, stepdaughter of Daniel Ortega, and daughter of Rosario Murillo addressed what was going on in Nicaragua to La Nación:


“The president comes out to invent that there is a conspiracy because he does not have the lucidity nor the audacity to admit that the people are claiming autonomy, without external political leadership. For his inability to accept mistakes, for that fundamentalism in the exercise of power, he believes that there must always be an external conspiracy, ignoring the intelligence that the people have to know how to face the moments of history that have touched us.”

Rumors are rampant but the timeline of what sparked the protests was posted on social media by CARivas on  April 22, 2018 and is reproduced below.

Ortega's rise, fall, and rise
Daniel Ortega and his Sandinista party overthrew the Somoza dictatorship in July of 1979 with the help of Cuban strategy, aide and arms. They ruled Nicaragua from 1979 through 1990 and were driven out following a prolonged guerilla struggle, carried out by the Contra, a negotiated peace and free elections in 1990. Ortega spent the next sixteen years running for re-election and finally succeeded returning to power via the ballot box in 2006 with a minority of the vote, but with a splintered and divided opposition.

In 2009 President Obama and Secretary of State Hillary Clinton met Daniel Ortega and embraced him. In 2011 Ortega "reformed" the constitution under dubious circumstances to be able to run for a third term. In 2015 Nicaragua was behaving aggressively on Costa Rica's border violating the country's frontier. Luckily it was resolved in an international court.


Despite normal relations and this high level outreach early in the Obama Administration the Ortega regime pursued closer relations with Russia and China. In April 2016 Nicaragua purchased 50 Russian battle tanks at a cost of $80 million. Vladimir Putin signed a new security agreement with Nicaragua's Daniel Ortega in 2016.  In August of 2016 Daniel Ortega names his wife candidate for vice president and won re-election in a dubious process in November of 2016. Tim Rogers, a past sympathizer with the Sandinista revolutionaries described the situation in Nicaragua in a July 30, 2016 Fusion essay that remains relevant today:


Since returning to office nearly a decade ago, Ortega has methodically and completely dismantled Nicaragua’s fragile institutional democracy from within and reshaped the laws in a way that support his personal aspirations to create a one-party system that he can govern unopposed till death do they part. By hook and crook, Ortega and his lackeys have taken control of all four branches of government, implemented a repressive zero-tolerance policy for street protests, and rewritten the constitution to eliminate checks and balances.

Ortega put the final nail in the coffin of Nicaragua’s democratic pluralism on Friday, when his sycophants in the Supreme Electoral Council ordered the ouster of 28 opposition lawmakers and substitute lawmakers from the National Assembly. Now Ortega doesn’t face any political opposition, symbolic or otherwise, and can run unopposed for another re-election in November. The Sandinistas argue that the death blow to the opposition was legal, and they should know since they wrote the laws. So congratulations, comandante, you’ve finally got your dream of turning Nicaragua into your family farm.

The consequences today are measured in lives lost and a country plunged in chaos. Rosa María Payá Acevedo, who leads a Latin American youth network, on April 21, 2018 tweeted: "[t]here are 12 youth who this Thursday had a future, love and a dream for their country. Today there are 12 families traversed by pain because of two dictators' pride Daniel Ortega and Rosario Murillo, students of Castroism repudiated by their people." Attached to the tweet was a list of 12 young Nicaraguans murdered in the protests over the previous 48 hours and reproduced below. 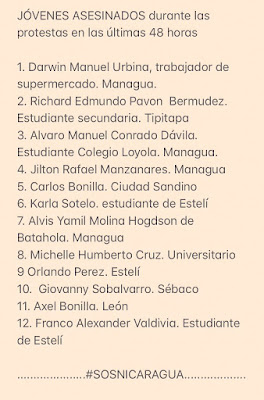 On the evening of April 22, 2018 reports indicated that the number of dead had increased to 25. The nationwide protests and failure to silence them with political terror led Daniel Ortega on Sunday to announce that the "pension reform" had been scrapped.  NPR international correspondent Carrie Khan tweeted at 11:49pm on April 22nd tweeted the photo of a protester weeping as the names of the dead were read out.


The hubris of the Ortega regime after 12 years in power has generated this crisis. Time will tell how it well end. However, of one thing we can be sure there has been an awakening in Nicaragua.