Deja vu at the Summit of the Americas


Today, shock troops of the Castro and Maduro regimes disrupted civil society gatherings running parallel to the Summit of the Americas in an effort to shut down civil discourse and silence dissenting voices from Cuba and Venezuela. This behavior needs to be placed in context.


On April 11, 2018 learned that U.S. citizens of Cuban origin were held for hours at immigration in Peru because the Cuban government had provided a list to the Peruvian government to not allow them to enter. Two days earlier the Castro regime sent a delegation, or a more accurate description would be shock troops,  to the Summit of the Americas in Lima. They walked down the stairs of the plane and began to chant in unison "I am Fidel."


Researcher and translator Michael Lima Cuadra identified one of the Castro regime's shock troops attending the Summit of the Americas. His name is Ronaldo Hidalgo Rivera. He was one of the men who knocked down Daniel Llorente Miranda (age 52) a Cuban dissident on May 1, 2017 as he ran with a flag of the United States outstretched in his arms over his head. 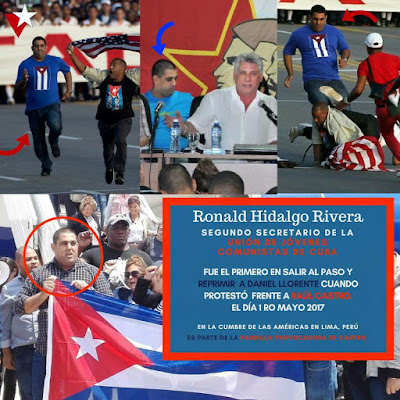 A banner critical of the human rights situation in Cuba and calling for an end to human rights violations was defaced and replaced with graffiti that read #ConCubaNoTeMetas which translates loosely to "Don't mess with Cuba", a slogan repeated by the Castro regime's shock troops. 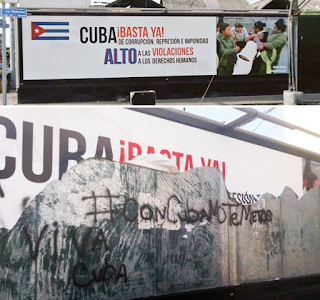 The pattern of harassment, acts of repudiation and an atmosphere of hostility is reminiscent of what happened at the first Summit of the Americas attended by the Cuban government in April of 2015 when a number of human rights defenders were violently assaulted, and some were hospitalized by agents of the Castro regime.

The Center for a Free Cuba has written a letter to the Secretary General of the Organization of American States and the Executive Secretary of the Inter-American Commission on Human Rights and made a formal request for the security of those attending the Summit.


We are calling on you and all democratic governments in the region to do everything possible to protect those now in Lima who wish to exercise their freedom of speech against the Castro dictatorship and in favor of the removal of Cuban security forces from Venezuela where they help the Maduro government to abuse and repress the Venezuelan people.

Three years ago in Panama, at the last Summit of the Americas, shock troops of the Castro regime disrupted civil society events, attacked peaceful demonstrators in a public park, and attempted to stop human rights defenders from being granted entry to the country to attend the regional gathering.


The 2015 Summit of the Americas in Panama marked the first time that Cuba had been invited to attend. Latin American leaders threatened that the VII Summit would not take place if the Castro regime was not invited. On September 22, 2014 Colombian President Juan Manuel Santos at a Americas Society/Council of the Americas meeting in New York City said, "if Cuba doesn’t go, then probably no Summit.”

Cuba has attended two Summits, disrupted them, engaged in violent acts that make a mockery of the democratic pretensions of the gathering. Peruvian authorities need to be vigilant and step up their game to ensure that these shock troops do not injure those attending the Summit of the Americas.