My dear Christian friends of East Berlin, I want to say what a great privilege and a great pleasure it is for me to come and share this period of worship and fellowship with you this evening.

I come to you not altogether as a stranger, for the name that I happen to have is a name so familiar to you, so familiar to Germany, and so familiar to the world, and I am happy that my parents decided to name me after the great Reformer. I am happy to bring you greetings from your Christian brothers and sisters of West Berlin, where I have just spent a day in that community and certainly one of the most rewarding days of my life.


Certainly, I bring you greetings from your Christian brothers and sisters of the United States. In a real sense we are all one in Christ Jesus, for in Christ there is no East, no West, no North, no South, but one great fellowship of love throughout the whole, wide world.

As you know, there is a great social revolution taking place in the United States of America, and it is the struggle to free some twenty million Negroes from the long night of segregation and discrimination.

We have attempted to conduct our struggle for freedom in the United States on the basis of Christian principles. Therefore, we struggle with non-violence and love as the basic elements of our struggle.
I solicit your continuous support and backing as we continue to go on in our efforts to make brotherhood a reality all over that country and over the world.

May I say that it is indeed an honor to be in this city, which stands as a symbol of the divisions of men on the face of the earth. For here on either side of the wall are God’s children, and no man-made barrier can obliterate that fact. Whether it be East or West, men and women search for meaning, hope for fulfillment, yearn for faith in something beyond themselves, and cry desperately for love and community to support them in this pilgrim journey.

Regardless of the barriers of race, creed, ideology, or nationality, there is an inescapable destiny which binds us together. There is a common humanity which makes us sensitive to the sufferings of one another. And for many of us, there is one Lord, one faith, and one baptism which binds us in a common history, a common calling, and a common hope for the salvation of the world.

But here the similarity ends. For in truth our situations are quite different. It is with some reluctance that I attempt to bring you God’s word for your situation. I have not been here long enough to discern God’s plan for you and his calling to you. However, I would like to share with you the way in which the spirit moves in our midst in the freedom struggle in the southern part of United States.

Throughout the New Testament, there runs the theme of reconciliation. Corinthians speaks of a ministry reconciliation which has been given to us in Christ. Ephesians tells us of a plan of God to “unite all things in him, things of heaven, and things on earth.” The Gospels speak directly and in parables about the responsibility which we have for one another regardless of the differences of race and nation. And so it is not difficult for us to go a step further and assume that wherever reconciliation is taking place, wherever men are “breaking down the dividing walls of hostility” which separate them from their brothers, there Christ continues to perform his ministry of reconciliation and to fulfill his promise that “Lo, I am with you always, even to the end of the age.”

It is with great humility that we in the United States in the freedom struggle have taken the liberty to assume that we are serving as agents of God’s reconciliation. This is through no particular virtue of ours, for we are most aware of our unworthiness. And yet, every Negro who has been involved in our movement very soon becomes caught up in a web of destiny which convicts us in the faith that God is working with us and through us in ways that we cannot fully understand. It is the messianism of a moment in history. For we believe that the Negro is called to be the conscience of our nation, and that in being that conscience, we will permit our nation to fulfill its particular role in history under God.
But, under God, every nation has a destiny, and the “people of God” in that nation have a peculiar responsibility to witness to that destiny and work toward its fulfillment.

Perhaps then we can share with one another of the blessings of God, which we have received in our particular situations. Let me begin to tell you some of the things that we have learned about God’s action in our midst.

This period of our freedom struggle began when Mrs. Rosa Parks of Montgomery, Alabama, refused to move to the rear of the bus, as was the Southern custom in 1955. In refusing to move, she did not resist, or respond discourteously in any way, she merely said by her presence that “it is wrong for a woman to have to give up her seat to a man merely because his skin is white and her skin is black.”

This was no planned protest. It was one of those spontaneous events of conscience, which the spirit calls for on occasion.

Immediately, the leadership of the Negro community organized to support Mrs. Parks when she was arrested, and called for a one-day boycott of the buses of the entire city. The boycott was so effective, and the response and indignation of the Negro citizens so great, that we continued the protest until the City of Montgomery and the bus company agreed to treat Negro passengers with courtesy and respect.

Several things happened as a result of this local protest, which indicate to us how God’s grace continues to operate amongst us. First, an isolated incident grew into a local movement. Then, this local movement spread to other cities and gave us a South-wide protest which awakened the majority of the Negro population in the United States. Second, a new pattern of social change became a part of the life and history of our nation, for the philosophy and method of Mohandas K. Gandhi joined with the Negro’s Christian tradition and gave us philosophical rationale and practical method by which our faith might be transmitted into mass movement for the liberation of our people from over 400 years of oppression.

But the results were far out of keeping with our expectations. Our only explanation can be that we were gripped by God in his holy kairos; our only response could be that of Martin Luther, “Here I stand, I can do no other, so help me God.”

And so our movement began. Not by the plans of men, but by one of the mighty acts of God. Men were merely called to respond in obedience. To suffer if necessary, to face death, and even to die if this be the price of faith. But it was out of the suffering and sacrifice of the poor people of Montgomery, Alabama, that God brought forth a powerful modern missionary action movement.

From this beginning, the students followed with a movement to desegregate lunch counters, which swept across the South and desegregated lunch counters in more than two hundred cities in a year’s time. Here the students learned that it was better to go to jail in dignity than to accept segregation in humiliation. More than 5,000 students served time in prison during the year of 1960, but this gave us the base for massive action across the South.

Now we have left the Egypt of slavery. We have journeyed and suffered through the “wilderness” of segregation. For the first time, we stand on the mountain looking into the “promised land” of creative, integrated living. But there are giants in that land, and many of our leaders falter.

Once we reached the top of the mountain, we could look out into two directions. As we look back into the wilderness, we see our brethren who have borne the burdens of slavery and segregation much too long. Many have not had the opportunity to get an education, which will prepare them for the “promised land.” Many are hungry and physically undernourished as a result of the journey. Many bear on their souls the scars of bitterness and hatred, seared there by the crowded slum conditions, police brutality, and the exploitation they experienced on the rural Southern plantations. Still others lack self-confidence and courage to compete in this new land, and they wallow in corroding despair.

On the other side of the mountain, we see the giants. But God has brought us along this far, and we sing a song in our movement, “Ain’t gonna let nobody turn me around.” And when we have been afraid in the past, we have sung this song and kept on marching. And so, we will not turn back. We will learn to confront these demons just as we have those in the past, and we shall overcome.

We have found ourselves literally “thrown to the lions” in the arena of life. No longer is there any question of what St. Paul meant by principalities and powers. We are just beginning to learn the rules of this new order. We are often abused, but we are learning to work together to fulfill our dreams through the political structures of our society.

“God of our weary years, God of our silent tears, Thou who has brought us thus far on the way; Thou who hast by thy might led us into the light, keep us forever in the path, we pray.”*

This is our prayer. For it is only by the might and power of God that we have been able to proceed. We have been as a “valley of dry bones,” and the spirit of the lord breathed into us the strength and breath of life, and the dry bones of my people put on flesh and courage and faith and began marching on to freedom land.

With this faith, we will speed up the day when the kingdoms of this world shall become the kingdom of our Lord and his Christ and he shall reign forever and ever. 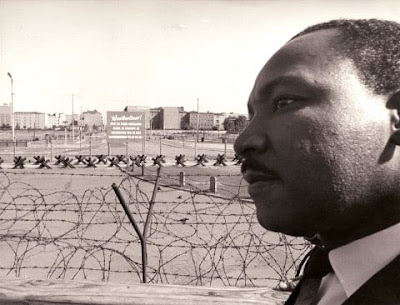