"To forget would be not only dangerous but offensive; to forget the dead would be akin to killing them a second time.” - Elie Wiesel, Night 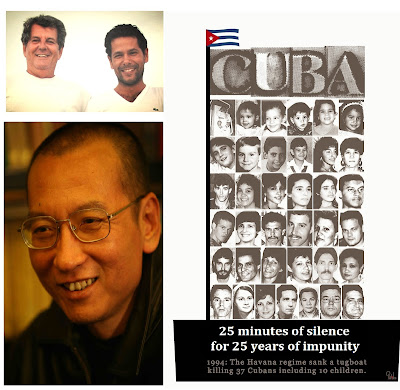 July 13th marks 25 years since 37 men, women and children were massacred by Cuban government agents who sank the tugboat they were on and used high pressure hoses to drown them. July 13th also marks two years since Nobel Peace Prize Laureate and Chinese dissident Liu Xiaobo died of "multiple organ failure" while still under the custody of the Chinese communists. Friends and family had expressed concern that he was not receiving proper medical care.

The moral failing of the West to back Chinese democrats in 1989 in order to pursue commercial interests with their communist oppressors led to the modernization and empowerment of Communist China into an economic and military super power that is reshaping the international global order. The consequences are seen today with an aggressive communist regime in China with a modern military that backs rogue regimes in North Korea, Venezuela and Cuba. This is part of the reason that human rights have been in decline around the world over the past ten years.

Inside China the human rights situation has also deteriorated. The political show trial of Chinese scholar, dissident and Nobel Laureate Liu Xiaobo in 2009 who spent eight years unjustly imprisoned and died of medical neglect while in the custody of the Chinese communists. This treatment of a Nobel Laureate demonstrates the regime's cruelty and indifference to international opinion.

The same holds true in Cuba where the embrace of commercial priorities, especially during the previous Administration coincided with the deaths of many high profile dissident leaders. On July 22, 2012 Oswaldo Payá Sardiñas and Harold Cepero Escalante were killed for dedicating their lives to a nonviolent transition to democracy and freedom in Cuba.

Harold Cepero (age 32) was a youth leader in the Christian Liberation Movement of which Oswaldo Payá was a founder. In 2002 he was expelled from the university for his role in a petition drive to reform Cuban laws to bring them in line with international human rights standards. At the time he wrote a statement on the injustice of what was taking place not only for him, but Cuban society as a whole:

"They are wanting to perpetuate something that it is not even known if it is fair, and in this manner they are denying the progress of a society that wants something new, something that really guarantees a dignified place for every Cuban. They are pressuring people or preventing them from expressing their true feelings, they are cultivating fear in the nation."

Fear is being cultivated both in China and in Cuba by the secret police to perpetuate their respective totalitarian regimes, and they are using the internet to do it.  We must combat the effort to erase the past with actions that observe these anniversaries. Join us on July 10 at 8pm for a candlelight vigil at the Cuban embassy (2630 16th St NW, Washington, DC 20009) to remember the 37 victims of the "13 de marzo" tugboat massacre, Chinese dissident Liu Xiaobo who died on July 13th, and Oswaldo Payá Sardiñas and Harold Cepero Escalante who were killed on July 22nd.
Posted by John Suarez at 6:21 PM