30 years ago on November 9, 1989 the Berlin Wall did not fall, it was torn down by free Germans

"It is your duty to use your combat … skills in such a way as to overcome the cunning of the border breacher, to challenge or liquidate him in order to thwart the planned border breach... Don’t hesitate to use your weapon even when border breaches happen with women and children, which traitors have often exploited in the past.” Order to Border Guards October 1, 1973.

"If we get shot, will you write about us?" - E. German Student, demonstrating against GDR regime


30 years ago today the Berlin Wall began to be physically torn down. It was a great day for freedom and the triumph of long years of nonviolent resistance throughout Eastern Europe.

The Berlin Wall had been constructed beginning on August 13, 1961 with barbed wire fence followed by a 100 mile wall and more than 300 watch towers to spot and shoot escapees and the East German communists called it the "Anti-Fascist Protection Rampart." Minefields were laid in some sectors.

The destruction of the Berlin Wall on November 9, 1989 was not inevitable. It did not fall down. It was torn down.

Remember that between 1961 and the very year it was torn down at least 136 Germans were extrajudicially executed by the East German border guards for trying to cross the Berlin Wall to freedom. There is The Berlin Wall Museum that offers a complete listing of the 136 known victims with details about them and their deaths.

We should also remember those who celebrated or ignored this scar that ran through the heart of Germany for 28 years and defended or rationalized the murder of unarmed civilians while hobnobbing with the East German leadership. What is their moral responsibility for these horrors?

Fidel Castro's first visit to Berlin began on June 13, 1972 and at various points the Cuban dictator addressed the border guards that policed the Berlin Wall to prevent East Germans from escaping to the West. At Brandenburg gate on June 14 in the afternoon (pictured above) he addressed the men charged with shooting East Germans fleeing to West Germany as "the courageous and self-denying border guards of the GDR People's Army who stand guard in the front line of the entire-socialist community." Later in the evening Premier Castro addressed the Nikolay Bezarin Barracks in East Berlin:


It is very important to know that the people of the GDR have great confidence in you, that they are truly proud of you. The comrades of the party and the citizens of socialist Berlin have told us with great satisfaction about the activity of the border troops, speaking with great admiration for you and for your services.

Later on in the same speech Mr. Castro offered his take on what he saw there and prospects for the future:


We have no doubt that a great political and revolutionary victory has been won in the GDR. You have created the foundations for the future, a truly revolutionary state, a border state to whom the future belongs. You are the new generation, which will continue this work.

He spent most of his visit accompanied by Erich Honecker, who as Central Committee secretary for security matters in 1961 was the individual in charge of building the Berlin Wall, and by 1971 via a power struggle and Soviet support had become the de facto head of state.

Angela Davis also paid visits to East Germany (in 1965 and 1972).  During her 1972 visit she was received by Erich Honecker. She celebrated the East German communist regime and refused to criticize, or recognize their short comings on human rights. She refused to make references to the Berlin Wall in her autobiography.

This practice extended beyond East Germany.

Angela Davis also visited Cuba in 1972 and Fidel Castro made her an honorary member of the infamous Committee in the Defense of the Revolution (CDR). Neighborhood committees that spied on Cubans to ensure their loyalty to the dictatorship.

Innocent people were being killed in Germany until 1989.

One of the last victims, Chris Gueffroy, was born on June 21, 1968 and shot dead by East German border guards on February 5, 1989 trying to cross on the Britzer Zweigkanal, near the small garden colonies “Harmonie“ and “Sorgenfrei” on the sector border between Berlin-Treptow and Berlin-Neukölln. Dead at 20 years of age for the crime of wanting to live in freedom. A memorial column in memory of Chris Gueffroy was erected at Britzer Zweigkanal in Berlin-Treptow in 2003 in honor of his 35th birthday. A biography and account of the circumstances that led to his death and the aftermath are available online.

The process of the Berlin Wall being torn down was both a struggle of ideas, of nonviolent resistance, and international solidarity. Germans crossed the wall seeking freedom in an act of nonviolent defiance. Many escaped but others paid the ultimate price for freedom. The Order to Border Guards from the East German regime was clear:


"It is your duty to use your combat … skills in such a way as to overcome the cunning of the border breacher, to challenge or liquidate him in order to thwart the planned border breach... Don’t hesitate to use your weapon even when border breaches happen with women and children, which traitors have often exploited in the past.”

Thirty years have passed and the words of the late Czech dissident Vaclav Havel remain relevant for our times, and in defiance of the inhumanity represented by the Berlin Wall. In 2003 he addressed a gathering at Florida International University that was prescient.


"Our world, as a whole, is not in the best of shape and the direction it is headed in may well be quite ambivalent. But this does not mean that we are permitted to give up on free and cultivated thinking and to replace it with a set of utopian clichés. That would not make the world a better place, it would only make it worse. On the contrary, it means that we must do more for our own freedom, and that of others."

The Berlin Wall reverberates strongly among Cubans, because since 1959 the Florida Straits have been turned into a killing zone by the communist regime in Cuba, along with border with the U.S. Guantanamo Naval Base.  Less than five years after the fall of the Berlin Wall on July 13, 1994 thirty seven Cubans were massacred for trying to flee Cuba. This scar demands that we do more for our own and others freedoms. 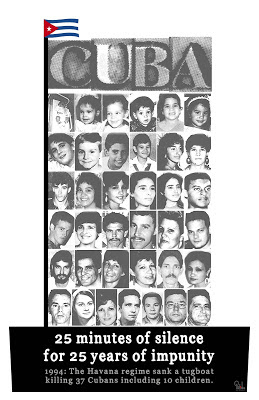 Nevertheless, we must celebrate the great days of freedom that unfolded in the heart of Europe in 1989, the winds of change that brought an end to the Berlin Wall, liberated tens of millions of people and that these free societies continue to endure and prosper after thirty years.

Tonight I will be celebrating and remembering, but tomorrow the struggle for freedom continues.