Truth Squad: The Castro legend is a lie.


Three years ago, on a Black Friday that fell on November 25, 2016, Cuban tyrant Fidel Castro died at the age of 90 never having had to answer for his many crimes against humanity both in and out of Cuba. From Nicaragua, to Ethiopia, to Venezuela, and in many other places the Castro regime assisted tyrants and dictators to hold on to and consolidate their power.  One day later in a blog post I predicted what would come next.

"Predictably over the next few weeks inside Cuba the world will see spectacles organized by the totalitarian dictatorship to "mourn the great leader." The regime has already started with nine days set aside for official mourning. This will not be the first time that monsters are mourned by an oppressed people through different methods of command, control and manipulation. The world has witnessed it before in the Soviet Union in 1953 and more recently in North Korea with the Kim dynasty. The death of Stalin as dramatized in the film "The Inner Circle" is recommended viewing for those about to follow the circus in Cuba in the wake of Fidel Castro's death.  Meanwhile in Cuba as the regime prepares its state funeral the Castro dictatorship's secret police begin to make threats, round up and take dissidents to undisclosed location and commit acts of violence."

What was not mentioned today is the role played by the United States government and The New York Times in undermining Fulgencio Batista's rule and bringing Fidel Castro to power.

Inconvenient Truth #1: Castro, not Batista, was backed by the United States in 1958. 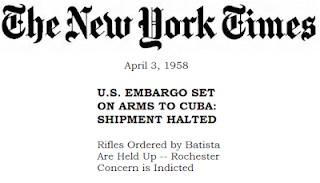 News of the arms embargo on the Batista regime broke in The New York Times on April 3, 1958, the psychological blow was delivered, but the United States went further.

Earl E. T. Smith,  the U.S. ambassador to Cuba, on December 17, 1958 delivered a message from the State Department to Fulgencio Batista that the United States viewed "with skepticism any plan on his part, or any intention on his part, to remain in Cuba indefinitely."  The U.S. government had dealt Batista a mortal blow, and fourteen days later the Cuban government fell. President John Kennedy shared this view according to First Lady Jacqueline Kennedy in a 1964 interview:

“We knew Earl Smith then, who’d been Eisenhower’s ambassador at the time,” said Jackie in the tapes featured in the book Jacqueline Kennedy: Historic Conversations on Life with John F. Kennedy. “When we were in Florida—that’s all Earl could talk about. Yeah, then Jack was really sort of sick that the Eisenhower administration had let him [Castro] come in and then The New York Times—what was his name, Herbert Matthews?”

Beginning in 1957 Herbert Matthews built up Fidel Castro's image both inside and outside of Cuba with a series of misleading articles in The New York Times. In July of 1959 Matthews reported: "[t]his is not a Communist Revolution in any sense of the term. Fidel Castro is not only not a Communist, he is decidedly anti-Communist." Anthony De Palma has written a book on Herbert Matthews titled, "The Man Who Invented Fidel" and describes how his heroic portrayal of Fidel Castro influenced the fall of the Batista dictatorship and the consolidation of the future dictator as a national figure.

Inconvenient Truth #2: Cubans did not want a communist revolution in 1959.

Fidel Castro in the 1950s repeatedly claimed that he was not a communist because he knew that advocating a communist revolution would lead Cubans to abandon him. On December 2, 1961 he explained his reasoning.

"If we had paused to tell the people that we were Marxist-Leninists while we were on Pico Turquino and not yet strong, it is possible that we would never have been able to descend to the plains."


On March 26, 1964, after announcing that he had always been a Marxist Leninist, Castro explained: "I conceive the truth in terms of a just and noble end, and that is when the truth is truly true. If it does not serve a just, noble and positive end, truth, as an abstract entity, philosophical category, in my opinion, does not exist." Jose Ignacio Rasco, who knew Fidel Castro from school and afterwards concluded that the Cuban revolutionary had been a committed communist by 1950.


Castro copied Lenin. The first leader of the Soviet Union, Vladimir Lenin on October 2, 1920 in a speech to Russian communist youth stated:

"The class struggle is continuing and it is our task to subordinate all interests to that struggle. Our communist morality is also subordinated to that task. We say: morality is what serves to destroy the old exploiting society and to unite all the working people around the proletariat, which is building up a new, communist society."

Lenin also addressed the necessity of the lie observing: "'To speak the truth is a petit-bourgeois habit. To lie, on the contrary, is often justified by the lie's aim."

In 1959 Castro was promising the restoration of democracy and the rule of law in Cuba – the exact opposite was done. Mass executions were broadcast and filmed to terrorize the population. While young dictator claimed to be a defender of freedom of expression, independent newspaper editors, were first warned that their lives were at hazard if they wrote critically against the revolutionary regime and by May 13, 1960 all independent newspapers in Cuba were shutdown.  They were replaced with regime publications subordinated to the communist party line. The same was done with all radio and television stations. This took place while Cuba and the United States had normal diplomatic relations. Relations did not end until January 3, 1961.

Inconvenient Truth #3: Castro sought the violent overthrow of Venezuela's social democracy
Fidel Castro visited President Rómulo Betancourt in Venezuela on January 23, 1959 assuming that he would find an ally. President Betancourt, was a man of the left, the first democratically elected president of Venezuela following the fall of the military dictatorship of Marcos Pérez Jiménez in 1958. He had met Castro in 1948, and at the time both agreed that Latin America had to change.

But in 1959 Castro met a Venezuelan leader who, over the years, had become critical of communism, a leader who even in the 1930s had said that he "did not agree with the interference of the Soviet Union in European countries."  During this visit Betancourt recommended that Cuba not fall into the hands of the Soviet Union and that Castro hold free elections. In 1963, the Congressional Quarterly reported how Fidel Castro responded to these recommendations:

"Riots led by Communists and other pro-Castro elements in Caracas [in the autumn of 1960] took the lives of 13 persons and injured 100. Venezuela recalled its ambassador to Cuba, and Betancourt ordered out the army to end the rioting, which he termed an attempt to “install a regime similar to that in Cuba.”

In 1961 Venezuela broke relations with Cuba and became one of the promoters of the exclusion of the island from the OAS, which was achieved in January 1962."


Cuban Communist leader Blas Roca, told a Havana rally on January 23, 1963 that when the communists gained full control and “make themselves owners of the great riches in oil, aluminum and everything their earth imprisons, then all of America shall burn.”  A cache of three tons of weapons was found on a Venezuelan beach in November 1963 that was to be used to disrupt the democratic elections there.

Castro would continue to agitate for revolution in Venezuela. On May 8, 1967 Francisco Toro in The Washington Post reported how: "two small boats carrying a dozen heavily armed fighters made landfall near Machurucuto, a tiny fishing village 100 miles east of the Venezuelan capital, Caracas. Their plan was to march inland and recruit Venezuelan peasants to the cause of socialist revolution." An all night gun battle with the Venezuelan military led to nine guerrillas dead, two captured, and one who had escaped.

Inconvenient Truth #4: Under Castro the standard of living in Cuba collapsed 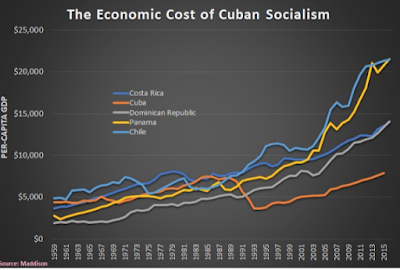 In 1959 Cuba's per-capita GDP  was second only to Chile and was doing better than Costa Rica, the Dominican Republic, and Panama. In 2015 Cuba lagged well behind the other four countries. It would be fair to say that in economic terms, despite billions in Soviet and Venezuelan subsidies that the past six decades have been a disaster for Cuba.

Political scientist Jaime Suchlicki wrote an essay for the Cuban Studies Institute on November 14, 2019 titled "Impact of Socialism in Cuba" about how this economic disaster began in Cuba.

"One of the first economic measures introduced by the Castro revolution after 1959 was the 50% reduction in rents people paid for apartments and single-family residences. This Urban Reform Law was hailed as a victory for the lower and middle classes, and a measure that would stimulate the economy since now renters would have more money to spend.

The result was very different. The law had a snowballing effect on the economy. Investors in apartments and commercial real estate refused to further invest. The real estate industry was paralyzed. Cement plants, plumbing companies, wood manufacturing, electronic factories and many more related enterprises closed, many went bankrupt. The economy entered a period of stagnation which never to recovered."

Political scientist Samuel Farber, writing in Jacobin in 2018 described the full nationalization campaign by the Castro regime in 1968.


"Castro initiated what he called the Revolutionary Offensive, a project aimed at totally nationalizing the island’s economy. The state had already taken over large and middle-sized businesses in 1960, but family-owned operations remained in private hands.

Within sixteen days of the announcement, the official press reported that 55,636 small businesses had been nationalized, including bodegas, barber shops, and thousands of timbiriches (“hole-in-the-wall” establishments). The Revolutionary Offensive gave Cuba the world’s highest proportion of nationalized property. According to Cuban economist Carmelo Mesa-Lago, some 31 percent of these small businesses were retail food outlets, and another 26 percent provided consumer services, like shoe and auto repair. Restaurant and snack shops represented another 21 percent; 17 percent sold clothing and shoes. The rest (5 percent) were small handicraft establishments that manufactured leather, wood products, and textiles. Half of these small businesses were exclusively owner- and family-operated and had no employees. Shortly after nationalization, the state closed one-third of the small enterprises. The only private activity left in Cuba was small-farm agriculture, where 150,000 farmers owned 30 percent of the land in holdings of less than 165 acres each.

One of the Revolutionary Offensive’s goals was to shut down the many thousand bars in Cuba, both private- and state-owned. The regime wanted them closed not because of opposition to alcohol but because it believed the bars fostered a prerevolutionary social ambiance, antithetic to the Castro government’s militaristic, ascetic, anti-urban campaigns to forge the “New Man.”

Fidel Castro's legacy is 60 years of dictatorship, firing squads, extrajudicial killings, the massacres of fleeing refugees, exporting his failed model elsewhere and the propaganda machinery that covers up these crimes and the bankruptcy of Castroism.