Failing to liberate Cuba in the 1990s, led to a resurgance of Communism in the Americas

"The salvation of this human world lies nowhere else than in the human heart, in the human power to reflect, in human meekness and human responsibility."- Václav Havel IHT (21 February 1990)

On Friday, November 15th I was contacted by one of Venezuelan organizers of a protest on the following day coinciding with massive protests  in Caracas, Venezuela and asked to speak. This is my draft of the document I used that day to address the crowd at Freedom Plaza as its final speaker.


George Santayana observed that "those who cannot remember the past are condemned to repeat it." Today in Latin America history is being repeated and communism has returned to pose an existential threat in this hemisphere.

Today I am attending this protest with a poster of Oswaldo Payá Sardiñas. This Cuban opposition leader was nominated for the Nobel Peace Prize, was a Sakharov Prize Laureate and was murdered together with youth leader Harold Cepero in 2012 by Cuban State Security. Today Jose Daniel Ferrer Garcia, and scores of other political prisoners are rotting in Cuban prisons and their lives are in peril.

The same Cuban state security agents and political police that took control in Venezuela, Nicaragua, and that today are trying to take control in Chile, and return Evo Morales to power in Bolivia are not to be underestimated.

The communist regime in Cuba has long term political and strategic objectives that it has patiently pursued for decades.

Consider the case of Venezuela. The Castro regime's interest in Venezuela began from the earliest days of the Cuban communist dictatorship.

Rómulo Betancourt, was a man of the left, the first democratically elected president of Venezuela following the fall of the military dictatorship of Marcos Pérez Jiménez in 1958. He had met Castro in 1948, and at the time both agreed that Latin America had to change. One of the first things that Fidel Castro did when taking power in 1959 was to visit Betancourt in Venezuela on January 23rd, assuming that he would find an ally.

But Castro met a Venezuelan leader who, over the years, had become critical of communism, a leader who even in the 1930s had said that he "did not agree with the interference of the Soviet Union in European countries. " During the above mentioned visit in 1959, Betancourt recommended that Cuba not fall into the hands of the Soviet Union and that Cuba hold free elections.

In 1960 Ernesto "Che" Guevara was giving unsolicited advice calling for Betancourt to use the firing squad against his "rightist opponents." In 1963, the Congressional Quarterly reported how:


"Riots led by Communists and other pro-Castro elements in Caracas [in the autumn of 1960] took the lives of 13 persons and injured 100. Venezuela recalled its ambassador to Cuba, and Betancourt ordered out the army to end the rioting, which he termed an attempt to “install a regime similar to that in Cuba.”

The Venezuelan president "believed that trade and diplomatic relations should be broken with the governments that came to power through coups, regardless of whether they were left or right. Thus, in 1961, Venezuela broke relations with Cuba and became one of the promoters of the exclusion of the island from the OAS, which was achieved in January 1962."

However, the Castro regime continued to agitate for the overthrow of democracy in Venezuela with a strategic aim. Cuban Communist leader Blas Roca, told a Havana rally on January 23, 1963 that when the communists gained full control and “make themselves owners of the great riches in oil, aluminum and everything their earth imprisons, then all of America shall burn.” A cache of three tons of weapons was found on a Venezuelan beach in November 1963 that was to be used to disrupt the democratic elections there. 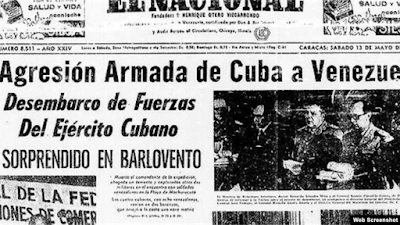 Fidel Castro would continue to agitate for revolution in Venezuela. A well documented incident occurred on May 8, 1967 and was reported by Francisco Toro in The Washington Post who described how:


"Two small boats carrying a dozen heavily armed fighters made landfall near Machurucuto, a tiny fishing village 100 miles east of the Venezuelan capital, Caracas. Their plan was to march inland and recruit Venezuelan peasants to the cause of socialist revolution."

An all night gun battle with the Venezuelan military led to nine guerrillas dead, two captured, and one who had escaped.

President Betancourt understood that the Castro regime was an existential threat to democracy in the Americas. During the 1962 Cuban Missile Crisis he mobilized two Venezuelan destroyers and a submarine to take part in the quarantine of Cuba.

Betancourt's successor in the presidency, Raúl Leoni Otero, took over in 1964 and remained in office until 1969 and pursued the policy of containment and isolation. Failing to violently overthrow Venezuela's democracy, Fidel Castro publicly renounced the exportation of revolution (although he continued the practice -- see Nicaragua and the rise of the Sandinistas in 1979 and the trafficking in drugs in Colombia to finance guerillas to overthrow the Colombian government in 1983) and began making overtures to the Venezuelan government that those times were over.
.
Venezuelan democrats forgot the nature of the Castro regime.

Diplomatic relations were restored between Venezuela and Cuba in December of 1974, oil deliveries resumed, and the democratic government of Venezuela under Carlos Andres Perez's first presidency advocated Cuba's readmission to the Organization of American States.

At the start of his second presidency (1988 - 1993), Carlos Andres Perez invited Fidel Castro to his inauguration.

Eastern Europe was liberated in 1989. Thirty years ago today the Velvet Revolution started in Czechoslovakia. The Sandinistas were driven out of office in fair and free elections in 1990. On Christmas Day 1991 the Soviet Union peacefully dissolved.  This was the moment for a democratic hemisphere to press a democratic transition in Cuba, but instead they assumed that the regime in Cuba would fall on its own.

They were wrong. Fidel Castro had rejected Gorbachev's reforms and banned Soviet publications.  This failure of solidarity in the Western Hemisphere would return to haunt Latin America.

In 1990 following a request made by Fidel Castro to Lula Da Silva the Sao Paulo Forum was established with the goal “to reconquer in Latin America all that we lost in East Europe.”  The FSP is a communist network comprised of over 100 left wing political parties, various social movements, and guerrilla terrorist organizations such as the Fuerzas Armadas Revolucionarias de Colombia (FARC) and the Chilean Movimiento de la Izquierda Revolucionaria (MIR).

Four years later, in a reaction to generalized disgust with corruption endemic to the Venezuelan democratic order epitomized by the Carlos Andres Perez administration the former coup plotter was elected president.

President Caldera, who had pardoned Chavez, handed power over to him in 1999. Together with Fidel Castro, as a mentor, Chavez began the process of turning a flawed democratic order into the totalitarian regime it is today.

Venezuelan money backed by Cuban spies and military personnel consolidated Chavez's rule and expanded their power base by flipping other countries. Nicaraguan strongman Daniel Ortega returned to power in 2006, along with the Sandinista Party.  In Bolivia, Evo Morales took power in 2006 and allied with the Sao Paulo Forum and developed close ties with Hugo Chavez and Fidel Castro. Rafael Correa achieved the same results in Ecuador in 2007 and would hang on to power for a decade, and today is helping to destabilize his successor, who has not followed in his foot steps.

Official channels announced that Hugo Chavez died on March 5, 2013 and was replaced by Nicolas Maduro, a hardcore communist, an individual who spent a lot of time in his early 20s in Cuba being trained by the Union of Young Communists and Pedro Miret, an official close to Fidel Castro.

Over the past six years Maduro has proven himself to be Havana's man, and Venezuela has been turned into a second Cuba. Complete with fake elections that only underscore that democracy has departed that South American country.

On July 19, 2017 the Secretary General of the Organization of American States, Luis Almagro testified before US lawmakers that “[t]here are currently about 15,000 Cubans in Venezuela ... It’s like an occupation army from Cuba in Venezuela.”

Venezuela had a strong and vibrant democracy for forty years, that successfully defended itself from Castroism, promoted democracy in the region, but when it bought into the enemy's lies and mistook the Castro regime for a friend the die was cast for the tragedy currently unfolding. Young Venezuelans are today paying with their lives for the mistakes made by Venezuelan politicians a generation ago.

This is a moment when positive change is possible. Democrats in this hemisphere should learn from the Sao Paulo Forum, and revitalize the Organization of American States into a structure that will strategically and patiently pursue democracy across the Western Hemisphere.

We are all responsible and we must collaborate together, and pursue freedom for all countries in the Americas, including Cuba.  History should teach that failing to do so in the 1990s is what brought and imposed this failed ideology on tens of millions in the Western Hemisphere.