"Nonviolence is a powerful and just weapon, which cuts without wounding and ennobles the man who wields it. It is a sword that heals." - Reverend Martin Luther King Jr., Nobel Lecture, December 11, 1964

Reverend Martin Luther King Jr. was born 93 years ago today in Atlanta, Georgia but never saw his 40th birthday because he was assassinated on April 4, 1968. A little over a year before his untimely death the nonviolent icon made an important speech at Stanford University which is worth listening to and studying.


"Let me say as I've always said, and I will always continue to say, that riots are socially destructive and self-defeating. I'm still convinced that nonviolence is the most potent weapon available to oppressed people in their struggle for freedom and justice. I feel that violence will only create more social problems than they will solve."

Dr. King's message remains relevant today and his family continues  to work at The King Center in  training new generations in the ways of nonviolence, and sharing his writings and speeches. They are introducing a new immersive, self-paced online learning experience in nonviolence.

Engaging people across the globe in exploring #MLK’s nonviolent philosophy and methodology.

Martin Luther King Jr. had a radical critique of American society. He repeatedly challenged the United States to live up to its own aspired ideals and sought through nonviolent action and democratic norms, reforms to end segregation and ensure voting rights for African Americans.

Reverend King's political outlook could best be described as falling within what is called Christian Democracy. This school of thought occupies the center with parties on the center left and the center right, but like Reverend King based on a Christian view of humanity in which "every individual is considered unique and must be treated with dignity."  In his April 4, 1967 speech, Beyond Vietnam gave full expression to this outlook:


"We must rapidly begin the shift from a thing-oriented society to a person-oriented society. When machines and computers, profit motives and property rights are considered more important than people, the giant triplets of racism, militarism and economic exploitation are incapable of being conquered. A true revolution of values will soon cause us to question the fairness and justice of many of our past and present policies. On the one hand we are called to play the Good Samaritan on life’s roadside, but that will be only an initial act. One day we must come to see that the whole Jericho Road must be transformed so that men and women will not be constantly beaten and robbed as they make their journey on life’s highway. True compassion is more than flinging a coin to a beggar. It comes to see than an edifice which produces beggars needs restructuring. "

Mohandas Gandhi, who greatly influenced King, also spoke of social responsibility and trusteeship. Gandhi, a self-described socialist, was not an enthusiastic proponent of an expanded social-welfare state as commonly understood arguing:


"The State represents violence in a concentrated and organized form. The individual has a soul, but as the State is a soulless machine, it can never be weaned from violence to which it owes its very existence. Hence I prefer the doctrine of trusteeship. [...] What I would personally prefer would be not centralization of power in the hands of the State, but an extension of the sense of trusteeship, as, in my opinion, the violence of private ownership is less injurious than the violence of the State. However, if it is unavoidable, I would support a minimum of State-ownership."

Furthermore the critique made by both King and Gandhi of a "thing-oriented" society or the state as a "soulless machine" looks to the person or the individual not an economic mechanism  or economic class. The focus is on the human person and polices that recognize and respect the uniqueness of each human being and their dignity.

When he was alive the civil rights leader was considered a controversial figure. The American FBI wiretapped Martin Luther King Jr., monitored the Civil Rights Movement, and carried out active measures against him. Many have heard about this, but not of the other campaign waged against the civil rights leader by Soviet intelligence, also known as the KGB. It is also important to remember that today when Russian intelligence operatives seek to sow discord, division and hatred in the United States between citizens that they did it before.

A favorite photo of my parents. What a genuine, joyful smile. And I wanted to share it with you on Daddy’s 93rd birthday. #MLK #MLKDay #CorettaScottKing pic.twitter.com/mi9xEhg4mu

In the book The Sword and the The Shield: The Mitrokhin Archive and the Secret History of the KGB by Christopher Andrew and Vasili Mitrokhin published in 1999 details were obtained from the Mitrokhin Archive on Soviet efforts to replace Martin Luther King Jr. with a “more radical and malleable leader” such as Stokeley Carmichael to provoke a race war in the United States.


“In August 1967 the Centre approved an operational plan by the deputy head of Service A, Yuri Modin, former controller of the Magnificent Five, to discredit King and his chief lieutenants by placing articles in the African press, which could then be reprinted in American newspapers, portraying King as an “Uncle Tom” who was secretly receiving government subsidies to tame the civil rights movement and prevent it threatening the Johnson administration." [...]  "King’s assassination on April 4, 1968 was quickly followed by the violence and rioting which the KGB had earlier blamed King for trying to prevent. Within a week riots erupted in over a hundred cities, forty-six people had been killed, 3,500 injured and 20,000 arrested. To “Deke” DeLoach, it seemed that, “The nation was teetering on the brink of anarchy.”86 Henceforth, instead of dismissing King as an Uncle Tom, Service A portrayed him as a martyr of the black liberation movement and spread conspiracy theories alleging that his murder had been planned by white racists with the connivance of the authorities."

University of Cambridge professor Christopher Andrew, who coauthored The Sword and the Shield with Vasili Mitrokhin was interviewed by Charlie Rose on PBS on September 28, 1999 about the book and towards the end of the interview discussed how the Soviets celebrated when Martin Luther King Jr. was assassinated by James Earl Ray.  The Russians celebrated because they did not want an independent African American leader, that they could not control, who was a principled nonviolence practitioner.

Taylor Branch, in the third book of his trilogy on Martin Luther King Jr. and the civil rights movement, At Canaan's Edge wrote about the Reverend's views on the militant call to armed struggle in the streets of the United States in January of 1968.


“Riots just don’t pay off,” said King. He pronounced them an objective failure beyond morals or faith. “For if we say that power is the ability to effect change, or the ability to achieve purpose,” he said, “then it is not powerful to engage in an act that does not do that–no matter how loud you are, and no matter how much you burn.” Likewise, he exhorted the staff to combat the “romantic illusion” of guerrilla warfare in the style of Che Guevara. No “black” version of the Cuban revolution could succeed without widespread political sympathy, he asserted, and only a handful of the black minority itself favored insurrection. King extolled the discipline of civil disobedience instead, which he defined not as a right but a personal homage to untapped democratic energy. The staff must “bring to bear all of the power of nonviolence on the economic problem,” he urged, even though nothing in the Constitution promised a roof or a meal. “I say all of these things because I want us to know the hardness of the task,” King concluded, breaking off with his most basic plea: “We must not be intimidated by those who are laughing at nonviolence now.”

These words remain as true today as when he uttered them a half century ago. Reverend King's legacy continues to inspire activists from around the world. This Baptist minister who risked all for the freedom of all African Americans and the redemption of the United States through the fulfillment of its creed that all men are created equal.

Unlike others, who were funded and supported by the Soviet Union, Martin Luther King Jr was targeted by both American and Russian intelligence agencies because he was his own man, and not controlled by anyone, save his conscience. He didn't advocate or engage in violence and changed the United States and the world for the better.

Let us remember him today on what would have been his 93rd birthday, and recommit ourselves to continuing his work "to shift from a thing-oriented society to a person-oriented society." 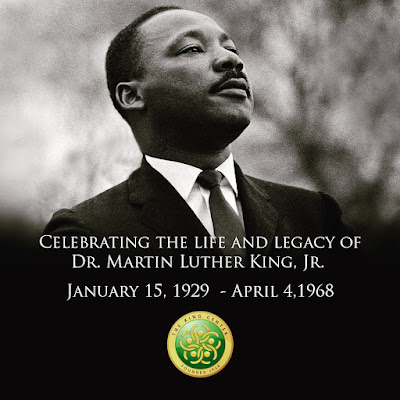