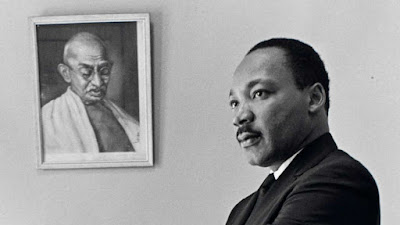 "All criticism is not intolerance. I have criticized the revolutionary because I have felt for him. He has the same right to hold me to be in error as I believe him to be in error." - Mohandas Gandhi 2/12/1925

"As I have walked among the desperate, rejected and angry young men I have told them that Molotov cocktails and rifles would not solve their problems." - Reverend Martin Luther King Jr., Beyond Vietnam: A Time to Break Silence (1967)


Reverend Martin Luther King Jr. was assassinated fifty years ago on April 4, 1968 by a racist white southerner who hated African Americans. Mohandas Gandhi was assassinated seventy years ago on January 30, 1948 by a Hindu nationalist driven by hatred, who rejected the Indian non-violent leaders teachings.  In both the assassinations of Gandhi and of King there is evidence of a conspiracy by several actors.

Martin Luther King Jr. had a radical critique of American society, but despite his own claims at times, was not a revolutionary. He repeatedly challenged the United States to live up to its own aspired ideals and sought through nonviolent action and democratic norms, reforms to end segregation and ensure voting rights for African Americans.  Reverend King's political outlook could best be described as falling within what is called Christian Democracy. This political school occupies the center with parties on the center left and the center right, but like Reverend King are based on a Christian view of humanity in which "every individual is considered unique and must be treated with dignity."  In his April 4, 1967 speech, Beyond Vietnam gave full expression to this outlook:


"We must rapidly begin the shift from a thing-oriented society to a person-oriented society. When machines and computers, profit motives and property rights are considered more important than people, the giant triplets of racism, militarism and economic exploitation are incapable of being conquered. A true revolution of values will soon cause us to question the fairness and justice of many of our past and present policies. On the one hand we are called to play the Good Samaritan on life’s roadside, but that will be only an initial act. One day we must come to see that the whole Jericho Road must be transformed so that men and women will not be constantly beaten and robbed as they make their journey on life’s highway. True compassion is more than flinging a coin to a beggar. It comes to see than an edifice which produces beggars needs restructuring. "

Mohandas Gandhi, who greatly influenced King, also spoke of social responsibility and trusteeship. Gandhi, a self-described socialist, was not an enthusiastic proponent of an expanded social-welfare state as commonly understood arguing:


"The State represents violence in a concentrated and organized form. The individual has a soul, but as the State is a soulless machine, it can never be weaned from violence to which it owes its very existence. Hence I prefer the doctrine of trusteeship. [...] What I would personally prefer would be not centralization of power in the hands of the State, but an extension of the sense of trusteeship, as, in my opinion, the violence of private ownership is less injurious than the violence of the State. However, if it is unavoidable, I would support a minimum of State-ownership."

Furthermore the critique made by both King and Gandhi of a "thing-oriented" society or the state as a "soulless machine" looks to the person or the individual not an economic mechanism  or economic class. The focus is on the human person and polices that recognize and respect the uniqueness of each human being and their dignity. The Konrad Adeneur Foundation in their publication Christian Democracy: Principles and Policy Making offers a vision of this made reality in what is known as the social market economy.


"[T]he principle of  solidarity  is first and foremost an  aspect of human behaviour that arises from the idea of a common humanity and altruism. The idea of solidarity obliges the strong to stand up for the weak. Solidarity comes to play in a social market economy in situations where individuals are temporarily unable  to participate in the workforce.  this may apply, in  particular, to those who are sick, pregnant woman,  the old and the unemployed.  In order to do justice to its socio-political responsibilities – while also meeting other responsibilities of the state including the  guaranteeing of internal and external security, the  provision of education, and the development of infrastructure – the state imposes taxes on its citizens  along with other social contributions dependent upon  the individual’s wage or other sources of income."

This is a departure from a strict market economy, focused on individuals as economic units and one that is arrived at through a process of reforms, not revolution.

This is in stark contrast to what actual revolutionaries in the United States were saying and doing at the same time as King organized in the 1960s and in India were saying and doing in the 1940s as Gandhi continued the nonviolent push for independence. Seeking to harness hatred to violently overthrow the existing power structure through the use of armed violence and embracing totalitarian ideologies.

Subhash Chandra Bose who was born in 1897 was an Indian nationalist leader who rejected Gandhi's nonviolent approach. He advocated an armed struggle against British imperialism, and allied with Nazi, Germany and Imperial Japan in 1941 to mobilize 60,000 Indian troops to fight against the British in India. The nationalist leader met with Hitler and other high ranking Nazis in Germany between 1941 and 1943. Chandra Bose exalted violence and bloodshed: "India is calling. Blood is calling to blood. Get up, we have no time to lose. Take up your arms! we shall carve our way through the enemy's ranks, or if God wills, we shall die a martyr's death. And in our last sleep we shall kiss the road that will bring our Army to Delhi." The defeat of the Axis powers meant that this violent approach failed and Gandhi's steadfast nonviolent posture made independence possible in 1948.

In the case of the United States, Stokely Carmichael who had derisively called the 1963 March on Washington, a "middle class picnic" emerged from the Civil Rights movement and rejected King's nonviolent approach. It is worth reviewing his evolution from an activist to a revolutionary.

Stokely Carmichael, born in 1941, attended the select Bronx High School of Science in New York City in the later 1950s, became friends with the son of Communist Party leader Eugene Dennis and became active in socialist youth politics. Carmichael joined a Marxist discussion group and participated in demonstrations against the House Committee on Un-American Activities that focused on communist subversion in the United States.

Carmichael joined the emerging Civil Rights movement led by the Reverend Martin Luther King Jr., who advocated nonviolent resistance as a method to achieve profound change. Carmichael enrolled in Howard University and joined "the school's Non-Violent Action Group, a civil-rights organization. In 1961 he participated in a number of anti-segregation initiatives in the Deep South, including "freedom rides" organized by the Congress of Racial Equality (CORE). Carmichael graduated from Howard University in 1964, with a degree in philosophy. Two years later he replaced John Lewis as head of the Student Nonviolent Coordinating Committee (SNCC).

In 1967 Carmichael was interviewed by Mario Menendez, editor of Sucesos, a Mexican magazine, while he was staying in Havana, Cuba attending the Organization of Latin American Solidarity (OLAS), a communist alternative to the Organization of American States (OAS) and made claims about the SNCC that others would reject:

"Now, we used the word nonviolent because at that time the central figure in the struggle to defend the black race was no one less than Martin Luther King and anyone who resorted to violence was considered a traitor. Consequently we resolved to use the word nonviolent. However we knew that our struggle would end up in violence, that it was only necessary to wait for the right time. So we accepted this name for the grouping and coordinated activities from city to city, wherever we could engage in nonviolent demonstrations."

During his tenure as SNCC chairman, Carmichael urged African Americans to engage in urban guerrilla warfare against the United States. He stepped down from the position of chairman in May of 1967. Carmichael went on to have a leadership position in the Black Panthers. He believed that, "[u]rban guerrilla warfare is the only means by which we can win in the United States because they cannot use bombs against us, since we are inside the country. They will have to fight us in hand-to-hand combat and we will defeat them."

On February 17, 1968 H. Rap Brown and Stokely Carmichael addressed the Oakland Auditorium. Carmichael made the case for armed insurrection  stating that, "We have to recognize the major enemy is the honky and his institutions of racism." ... "Whenever anyone prepares for revolutionary warfare you concentrate on the major enemy." ... "We will not fight each other. There will be no fights in the black community among black people. There will just be people who will be offed." ... "We must first develop an undying love for our people ... an undying love as is personified in brother Huey P. Newton ... If we do not do that, we will be wiped out."

One day after the assassination of Martin Luther King Jr. Stokely Carmichael repeated his call for an armed uprising to overthrow the government of the United States. Below are excerpts of the press conference where he spoke out.


Diane Nash, a great pioneer of nonviolence from the sit-ins to the Selma march, rejected nonviolence and took up with the call of Black Power. Nash described her reasoning:


"If we've done all this through nonviolence, think what we could do if we were just willing to be urban guerrillas and knock over a few banks. [...] "Of course, ten years later I looked up and I hadn't knocked over any banks and I hadn't been a guerilla. I hadn't even been to the rifle range. But I had withdrawn from this painful, creative engagement with nonviolence and democracy behind a big smokescreen of noise."

In addition to deactivating serious activists the lure of violence and urban guerrilla warfare would exact a terrible cost.

No one controlled Martin Luther King Jr. and it bothered many
Reverend King's nonviolent posture was not convenient for those who wanted bloody chaos and violence in the United States.

In 1992 a high ranking Russian intelligence officer defected to the United Kingdom and brought with him notes and transcripts compiled over the previous thirty years as he moved entire foreign intelligence archives to a new headquarters just outside of Moscow. The Russian intelligence officer’s name was Vasili Mitrokhin and the information he gathered became known as The Mitrokhin Archive. In the groundbreaking book, The Sword and the The Shield: The Mitrokhin Archive and the Secret History of the KGB by Christopher Andrew and Vasili Mitrokhin published in 1999 details were obtained from The Mitrokhin Archive on Soviet efforts to replace Martin Luther King Jr. with a “more radical and malleable leader” such as Stokely Carmichael to provoke a race war in the United States.

This Wed, April 4...50 years since #MLK was assassinated.

Next Mon, April 9...50 years since his funeral procession.

Join us April 9 as we march the path of the procession for our: #MarchForHumanity
12pm EST, #Atlanta