Seventy four years ago Mohandas Gandhi was shot three times in the chest and killed by Hindu nationalist Gopal Godse at 5:17pm. Godse was part of a team of assassins that had tried 10 days earlier to bomb and kill Gandhi.

Gandhi despite his successful struggle for independence and the establishment of the largest democracy on the planet was felled, after repeated assassination attempts they gunned him down as he went to worship. They murdered the independence leader because they did not believe that India could survive with Gandhi promoting Satyagraha and a Muslim state next door. Gopal Godse, a co-conspirator and brother of the assassin Nathuram Godse, argued as late as February 2000 in a Time magazine interview that: “In politics you cannot follow nonviolence. You cannot follow honesty. Every moment you have to give a lie. Every moment you have to take a bullet in hand and kill someone.”
Communists view nationalists as a threat to their revolutionary project, and nationalists often have a critical view of Marxism-Leninism, but they both agreed in their hostility to Mohandas Gandhi.
The nationalists were open and transparent about their evil intent, but the communists had more guile, and their reasons for rejecting him more complex.
The Soviet press published an article written by S.M. Vakar in 1948 following Gandhi's assassination on January 30, 1948 titled "The Class Nature of the Gandhi Doctrine" subtitled "Gandhi as a Reactionary Utopian" in the Soviet philosophy journal Voprosy filosofii (Questions of Philosophy). The Marxist Leninist argument was outlined as follows:


Although Gandhi regarded the union and independence of the Indian peoples as his goal, his reactionary-Utopian social theory and the reformist methods of struggle connected with it caused his activity to fail in facilitating overthrow of the colonial yoke [...] The social essence of the Gandhi doctrine and its fundamentally reactionary role in the history of India's national liberation movement has hardly been treated in Marxist literature. Yet this doctrine still retards the development of class awareness among the Indian masses.


'Satyagraha.' Truth (Satya) implies love, and firmness (agraha) engenders and therefore serves as a synonym for force. I thus began to call the Indian movement 'Satyagraha,' that is to say, the Force which is born of Truth and Love or non-violence, and gave up the use of the phrase 'passive resistance,' in connection with it, so much so that even in English writing we often avoided it and used instead the word 'Satyagraha' itself or some other equivalent English phrase.

The Marxist-Leninists embrace revolutionary violence and a movement led by a small vanguard of intellectuals and professional revolutionaries that carry out the changes "necessary" by whatever means necessary and reject nonviolence as naive. They follow the doctrine of  Vladimir Lenin as presented in his 1902 revolutionary tract "What is to be done." 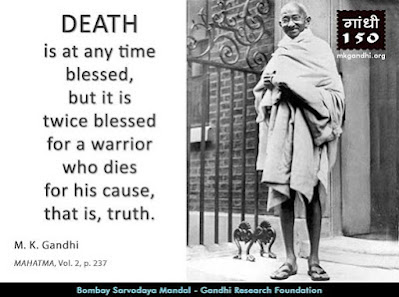 Over a century has passed since both sets of ideas have been set out and applied around the world. An analysis done by Maria J. Stephen and Erica Chenoweth systematically explores the strategic effectiveness of both violent and nonviolent campaigns using data on 323 campaigns carried out between 1900 and 2006.[1] Their findings demonstrate that major non-violent campaigns were successful 53% of the time versus only 26% for major violent campaigns and terrorist campaigns had a dismal 7% success rate.
Today, India with all its flaws is the world's largest democracy with a growing economy that presents new competitive challenges to the developed world and Communism has amassed a body count of 100 million dead and counting. It would appear that Gandhi's criticisms of the communists were prescient:


"The socialists and communists say, they can do nothing to bring about economic equality today. They will just carry on propaganda in its favor and to that end they believe in generating and accentuating hatred. They say, when they get control over the State, they will enforce equality. Under my plan the State will be there to carry out the will of the people, not to dictate to them or force them to do its will." - Mohandas Gandhi

It is Satyagraha that is relevant today in 2022 and offers an alternative to the conflagrations suffered in the 20th century and the wars that plague the world now. Gandhi's Satyagraha is a call to principled non-violence but even pragmatists and realists looking over the historical record cannot fail to be influenced by the fact that non-violent civic resistance works and offers a better chance of a better life for more people.

Below is a 2018 documentary by Deutsche Welle about the assassination of Mohandas Gandhi. It is also available in Spanish.
Posted by John Suarez at 1:41 AM