Reflections on Ukraine from a peace rally in front of the White House: Civilian based defense and strategic nonviolence

"The era of dictatorships and totalitarian systems has not ended at all. It may have ended in a traditional form as we know it from the 20th century, but new, far more sophisticated ways of controlling society are being born. It requires alertness, carefulness, caution, study and a detached view." - Václav Havel, "Freedom and Its Enemies" November 14, 2009. 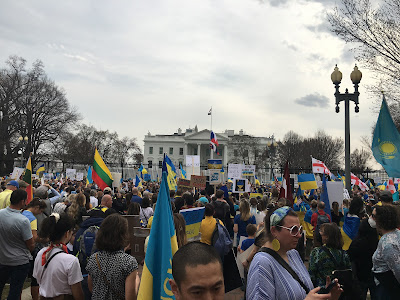 Today, at the White House in Washington DC thousands of Ukrainians, and friends of Ukraine gathered to call on President Biden to do more. Politicians, diplomats, and members of the clergy spoke out for an end to the Russian invasion of Ukraine.
Václav Havel's words from November 14, 2009, speak to the present moment in Europe. Vladimir Putin's total invasion of Ukraine reveals that the era of dictatorship, and empire continues, and repeated efforts by various U.S. Presidents to legitimize Putin pursuing normal relations have failed.
When negotiations between Ukraine and Russia broke down on removing nuclear weapons from Ukraine in September 1993, the United States government engaged in a trilateral process with Ukraine and Russia. This resulted in the January 1994 Trilateral Statement. Ukraine agreed to transfer its nuclear warheads to Russia. Ukraine received security assurances from the United States, Russia, and the United Kingdom.
The breaking of that agreement sends a dangerous message: if you give up your nuclear weapons then your neighbor can invade you with impunity, and in the case of Russia, a nuclear power, threaten nuclear annihilation. 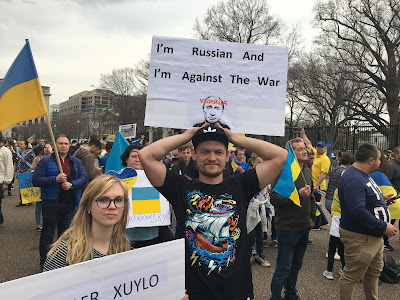 Putin's attacks against Georgia in 2008, Crimea in 2014 and the eight years long low intensity war in the Donbas region in Eastern Ukraine, and the February 24, 2022, multipronged Russian invasion of Ukraine were all acts of aggression in violation of international law.
The Russian dictator's repeated aggressions were backed by Cuba in 2008, 2014 and now in 2022. They represent an alternative international order based on brute force. The Castro regime's foreign minister on Putin's invasion of Ukraine said that Russia “has the right to defend itself.”
This latest act of aggression has been met with a brave response of the Ukrainian military, and the citizenry who have violently resisted the latest Russian invasion, but the costs in deaths and destruction meted out by the Russian invaders continues to be high. Over a million Ukrainians have fled the country, and it appears there will be many more.
In light of this what can be done to repel and/or frustrate the aggressors while minimizing the loss of life? 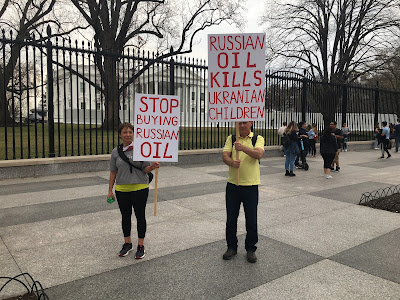 How effective is it to arm grandmothers and children with AK-47s to take on battle hardened Russian troops? Or Germany sending the government of Ukraine 35-year-old anti-aircraft missiles that were deemed unusable in 2012?
Vladimir Putin is a war criminal, and he is also guilty of poisoning and murdering Russian dissidents and journalists throughout his rule. He is a brutal dictator experienced in violent conflict.
Too many discard nonviolence as an option claiming that Putin is as bad as Hitler, but the reality is that nonviolent actions against the Nazis in Denmark and Germany were successful. Secondly, Putin is not Hitler, but a brutal dictator and former KGB officer. 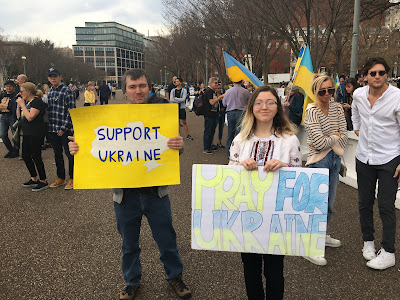 Even the 26% figure needs to be looked at in the Cuban context. The above-mentioned Stephan, Chenoweth study also suggests “that nonviolent campaigns are more likely than violent campaigns to succeed in the face of brutal repression.” 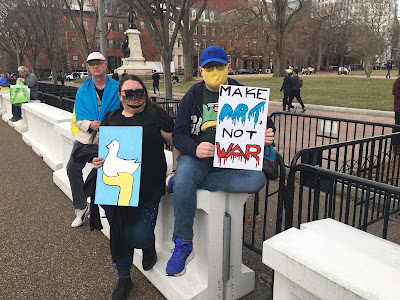 There is an alternative to a violent insurgency or abject surrender.

This isn't the first time Russia has invaded a neighbor who was not a threat to them, and unlike Afghanistan, the example of Czechoslovakia offers some useful insights for today.
On August 20, 1968, Warsaw Pact military forces initiated a massive invasion of Czechoslovakia. On the morning of the 21st Czechs and Slovaks found their streets filled with tanks and troops from East Germany, Poland, Hungary, Bulgaria and Russia. However, it would take these occupation forces eight months to complete their invasion. This was due to a nonviolent civilian defense that was mounted and sustained for months, and laid the groundwork for the Velvet Revolution.
Although not focused on in most media accounts there are examples that civic resistance is having an impact in Ukraine. 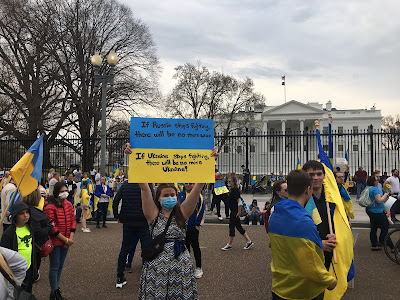 The nonviolent theoretician Gene Sharp published a book that is available online titled Civilian Based Defense: A Post-Military Weapons System that explores how these methods can be applied at the national level as a method of national defense.
Waging Nonviolent makes the case how nonviolent resistance can demoralize an army and lead to mutinies, and references Sharp's book.

In his highly-relevant text “Civilian-Based Defense,” Gene Sharp explained the power of mutinies — and civilians’ ability to cause them.

“Mutinies and the unreliability of troops in repressing the predominantly nonviolent Russian revolutions of 1905 and February 1917 were highly significant factors in the weakening and final downfall of the tsar’s regime.”

Mutinies increase as the resistance targets them, attempting to undermine their sense of legitimacy, appealing to their humanity, digging in with prolonged, committed resistance, and creating a compelling narrative that the invading force simply does not belong here.

Friends of a free Ukraine, and against Russian imperialism owe it to themselves, and the people of Ukraine to share this information on nonviolent resistance that has been shown in other circumstances to be more effective in resisting brutal despots like Vladimir Putin.