How it started, and how it ended.

On April 26, 1989 the People's Daily ran an editorial with the objective of frightening students into submission that had the opposite effect enraging them instead and mobilizing many more to go and protest in Tiananmen Square.  It was a strategic blunder of the first order carried out by the highest levels of the Chinese Communist regime.

Imagine for a moment that for 51 days of demonstrations beginning on April 15, 1989 thousands of students gathered nonviolently to protest and demand reforms. Protests had taken place before in China in 1986, but had not been sustained.  This time, in part due to the regime's demonizing of the student demonstrators, the protests grew and did not dissolve. 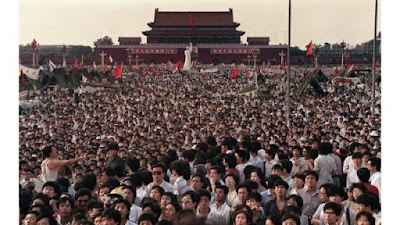 At the height of the student movement in China, over one million people marched in the streets of Beijing. This movement ended with the government's crackdown and the Beijing massacre of June 4.

Below is the documentary, The Gate of Heavenly Peace, that captures the days of protest leading up to the crackdown and the massacre.

Nonviolent resisters should learn as much as they can about this important movement. Finally, the struggle for a free China continues to the present day and needs our solidarity.

It is also important to challenge the official narrative that nothing happened, or worse that it was a "vaccination." Thousands were killed, and it was not just students, but also workers in solidarity with student protesters.

Chinese Communist Defense Minister Wei Fenghe on June 2, 2019 at a regional forum defended the Tiananmen Square massacre claiming "[t]hat incident was a political turbulence and the central government took measures to stop the turbulence, which is a correct policy."

The official newspaper, The Global Times, doubled down claiming that the mass killings and crackdown were "[a]s a vaccination for the Chinese society, the Tiananmen incident will greatly increase China's immunity against any major political turmoil in the future." The message is clear the Communist Chinese regime in China is willing to kill large numbers of Chinese to remain in power.

A 2017 declassified British diplomatic cable revealed that "at least 10,000 people were killed in the Chinese army's crackdown on pro-democracy protesters in Beijing's Tiananmen Square in June 1989."

The Pro-Democracy Movement that had taken to the streets in April of 1989 was violently crushed by the Chinese communist dictatorship beginning on the evening of June 3, 1989.

By dawn on June 4, 1989 scores of demonstrators had been shot and killed or run over and crushed by tanks of the so-called People's Liberation Army.

On June 5, 1989 in Beijing, following the massive and bloody crackdown after six weeks of protests that began in Tiananmen Square and spread across 400 cities in China, a man risked all to protest what had taken place. 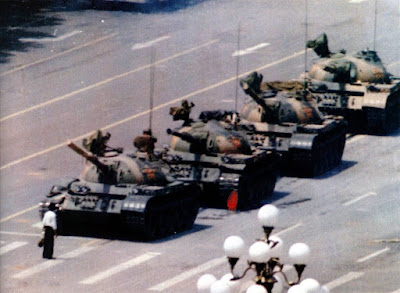 Wearing a white t-shirt, black trouser, and carrying what appeared to be a shopping bag he walked out on the north edge of Tiananmen Square, along Chang'an Avenue and faced down a column of Type-59 tanks.

We must also remember the courage of the late Nobel Laureate Liu Xiaobo who saved the lives of many young Chinese in Tiananmen Square in June of 1989 obtaining safe passage for them and persuaded these students to leave before the massacre unfolded.  This courageous and nonviolent human rights defender was jailed in 2008 and died on July 13, 2017.