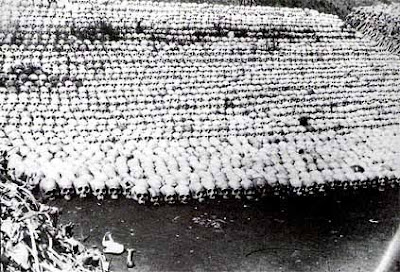 The Khmer Rouge murdered 1/4 of the entire population of Cambodia in under four years. Now more than 30 years later the 3 most senior remaining leaders of the Khmer Rouge are on trial for crimes against humanity and are offering differing explanations for the estimated 1.7 million deaths between 1975-1979. They are: Nuon Chea, 85; former head of state Khieu Samphan, 80; and former Foreign Minister Ieng Sary, 86 and are all charged with crimes against humanity, genocide, religious persecution, homicide and torture.

The former Head of state of the Khmer Rouge, Khieu Samphan stressed the nationalist credentials of his movement and said that communism gave the best hope for developing Cambodia. Furthermore that the crimes and genocide attributed to him were "a fairy tale."

The trouble is that others, while still trying to justify their actions admit that the wholesale slaughter went on. There is also abundant evidence to back up the fact that a genocide took place in Cambodia. Nuon Chea in the documentary Enemies of the People spoke about it and justified it although expressing some regret: "I have always said I made mistakes. I am regretful and I have remorse. I am sorry for our regime. I am sorry," but then went on to add "that they were safeguarding the revolution and that they 'were enemies of the people.'"

The trial begin in 2009 with the case of Kaing Guek Eav, better known as Duch, and the guilty verdict was delivered on July 26, 2010. Duch, 67, commanded the notorious S-21 prison where as many as 16,000 people were tortured before being sent for execution in the late 1970s. He is the first senior Khmer Rouge figure to face trial, and the only one to acknowledge responsibility for his actions. He was sentenced to 35 years in prison and the sentence was later reduced to 19 years. He is appealing the sentence.
Posted by John Suarez at 11:13 AM