International Human Rights Day and Cuba: What really happened and how was it reported

“When truth is replaced by silence,the silence is a lie.” - Yevgeny Yevtushenko 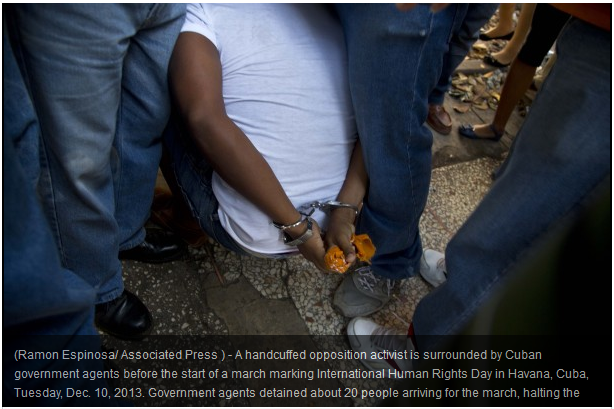 On International Human Rights Day the media was more interested in the handshake between the president of the United States and the dictator of Cuba at the Mandela memorial service. Searching google with "'human rights day' Cuba dissidents" provided only 50 results versus 72,400 results for "Castro Obama handshake" However, the massive crackdown in Cuba, at first garnered little attention, and what was reported low balled and trivialized what was taking place while offering a misleading analysis and questionable sources. Scores of activists detained and women activists badly beaten to the point of being hospitalized and requiring surgery for internal injuries was not deemed newsworthy by the Cuba based news bureaus or that two Argentine human rights defenders had been detained in the island for meeting with Cuban dissidents. The heightened level of repression appears to be in response to the increased number of activities by civil society to commemorate human rights day combined with the belief that they will not pay a political price for their repression. Some of these activities were small gatherings in a private home to observe December 10th.

The level of violence visited upon activists such as Damaris Garcia of the National Resistance Front Orlando Zapata Tamayo who lives in Velasco, Holguin whose home was attacked with gas launched by regime officials because various activists along with an elderly woman and Damaris's young son had gathered there on December 10th to observe the anniversary of the signing of the Universal Declaration of Human Rights. The child was asphyxiated by the gas and is still suffering from complications.

Meanwhile, in Puerto Padre, Las Tunas, dozens of members of the Christian Liberation Movement (MCL) were attacked with clubs, stones and tear gas as they gathered at the home of Roger Curbelo. Through their Facebook account, MCL members reported that police and "special forces" burst into the house, breaking the door and windows, leaving several injured and arrested, among others, Alexis Guerrero, Ismael Guerrero, Ezequiel Morales, Roger Curbelo, Ercilia Correoso and Armando Peña, who was later abandoned in an embankment far away from home.

Over twitter initially and finally in The Miami Herald on December 12, 2013 the plight of Arlenis Pérez Alarcón, a member of the Ladies in White based in Santiago de Cuba was finally reported on. Arlenis was repeatedly kicked and stomped on during a confrontation between police and about 20 Ladies in White on December 10, 2012. She required emergency surgery on December 11, 2013 and was discharged the same day, despite her daughter's protests concerning the seriousness of her mom's injuries, late on Wednesday, due to pressure from state security.


The statements made below by both the Reuters and Associated Press reports that there were "pro-government demonstrators", that "government employees mounted rival gatherings" and that a "hundred school children chalked peace symbols...and sang in a government-organized event," ignores the reality that Cuba is a totalitarian dictatorship and these activities are ordered from on high and orchestrated by state security agents. In addition that children are obligated to take part in these political activities which sometimes include acts of violence against nonviolent activists in order to be able to study at university and avoid themselves being targeted.

In addition to these omissions the Associated Press report repeats the dictatorship's propaganda line against the Cuban dissidents and the dictatorship "organizing a human rights forum" without providing context or scrutiny. Excerpts are provided below along with links to the full articles. It is ironic that Al Jazeera provided more objective reporting, but they no longer have a news bureau in Cuba.

Andrea Rodriguez of the Associated Press based in Havana reported:


Cuban government agents have detained about 20 dissidents arriving for an International Human Rights Day march, halting the demonstration before it started. The opponents were seen being taken away in cars and buses Tuesday afternoon after their planned protest along a central street in Havana was interrupted. The would-be protesters resisted, but no injuries were reported. It was not known where they were taken. Pro-government demonstrators gathered in the street to shout slogans for the Cuban revolution. Cuban authorities consider the island's small community of outspoken dissidents to be counterrevolutionaries and charge they accept foreign money to try to undermine the Communist system. The government marked the day by organizing a human rights forum that celebrated its achievements in providing citizens with social services and protections.

Mark Frank of Reuters, also based in Havana, reported:


Cuban dissidents and government employees mounted rival gatherings across the Communist-run Caribbean island on Tuesday, marking the 65th anniversary of the adoption of the Universal Declaration of Human Rights by the United Nations.
While a handshake between U.S. President Barack Obama and Cuba's Raul Castro during ceremonies in South Africa honouring Nelson Mandela provided a moment of cordiality between the long-time foes, 15 Cuban dissidents held a seminar on human rights in the upscale Havana district of Miramar.
Outside, a hundred school children chalked peace symbols on the sidewalk, danced and sang in a government-organized event.

One day later EFE reported that "up to 150 arrested on global human rights day" and reported:

As many as 150 dissidents were arrested while trying to mark U.N. International Human Rights Day, the opposition Cuban Human Rights and National Reconciliation Commission said Wednesday.
"As a preliminary figure, (there were) between 100 and 150 people arrested, not counting other forms of harassment or acts of vandalism. There was a lot of police violence all across the country," commission spokesman Elizardo Sanchez told Efe by telephone.

Most of the international media relies on the reports of Elizardo Sanchez, but fail to qualify that 1) when Oswaldo Payá and Harold Cepero were killed on July 22, 2012 Sanchez was initially repeating the official government version that it was an accident. 2) The Christian Liberation Movement reported that "two days after the deaths  Mr. Alejandro González Raga called them to transmit a message: Elizardo Sánchez says that for the well being of the family, that they accept that it was an accident. The Payá family in Havana received afterwards death threats by telephone from state security of the Cuban government." The failure to at least qualify the statements made by this individual in light of his past acts is disturbing. Furthermore that another human rights defender with a nationwide network who has been targeted with harsh repression, that Amnesty International said amounted to torture, Juan Carlos Gonzalez Leiva, is relatively ignored.

Reports published by the news bureaus in Havana fail to mention the level of violence visited on Cuban dissidents. The fact that some had to be hospitalized because of the seriousness of their injuries was left out of their reporting or that this is part of a worsening trend seen over the past three years. Finally, it appears that the number of dissidents arrested greatly exceeds the 150 mentioned in press accounts.