"The oppressor dies and he is forgotten, the free man is jailed and he is mentioned everywhere." - Waleed Abu al-Khair 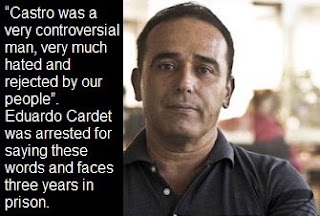 Eduardo Cardet Concepción marks two years in prison today in Cuba.  Eduardo is a medical doctor, a husband, and a father of two small children. He is widely respected in his community. He is a person of impeccable moral character. Despite all of this, he was beaten up and arrested in front of his wife and children on November 30, 2016. He has spent 731 days in captivity, continued to suffer beatings in prison, and was repeatedly stabbed with a sharp object. Both he and his family have been additionally punished, and visits and calls denied for months at a time.

In March of 2017 he was sentenced to three years in prison, and Amnesty International recognized him as a prisoner of conscience.

The Spanish Senate, members of Congress, international human rights gatherings, civil society and the Christian Liberation Movement have called for his immediate release.

The obvious question that arises is what did this good man and his family do to receive all this punishment?

The answer is simple, but hard to believe if one does not understand the nature of the government in Cuba.

Eduardo Cardet in addition to everything outlined in the second and third sentence of the first paragraph of this essay is also a democrat, a human rights defender, and speaks his mind openly. Because of this he had been a victim of regime harassment in the past.

Fidel Castro died on November 25, 2016 while Cardet was outside of Cuba. He was interviewed by international media and gave a frank assessment of Fidel Castro's political legacy and said that there was nothing positive.

Refusing to mourn Fidel Castro's death is punishable by prison in Cuba, and offering a nonviolent political alternative to the existing system is grounds for a prolonged prison sentence.

This is why Eduardo Cardet Concepción is a prisoner of conscience who has observed his 49th and 50th birthdays in a Cuban prison.

Let us make sure that this innocent man's name is mentioned everywhere.