"What's past is prologue" - William Shakespeare
The Castro regime's interest in Venezuela began from the earliest days of the dictatorship.  Rómulo Betancourt, was a man of the left, the first democratically elected president of Venezuela following the fall of the military dictatorship of Marcos Pérez Jiménez in 1958. He had met Castro in 1948, and at the time both agreed that Latin America had to change. One of the first things that Fidel Castro did when taking power in 1959 was to visit Betancourt in Venezuela on January 23rd, assuming that he would find an ally.

But Castro met a Venezuelan leader who, over the years, had become critical of communism, a leader who even in the 1930s had said that he "did not agree with the interference of the Soviet Union in European countries. "

During the above mentioned visit in 1959, Betancourt recommended that Cuba not fall into the hands of the Soviet Union and that Cuba hold free elections.

In 1960 Ernesto "Che" Guevara was giving unsolicited advice calling for Betancourt to use the firing squad against his "rightist opponents." In 1963, the Congressional Quarterly reported how:

"Riots led by Communists and other pro-Castro elements in Caracas [in the autumn of 1960] took the lives of 13 persons and injured 100. Venezuela recalled its ambassador to Cuba, and Betancourt ordered out the army to end the rioting, which he termed an attempt to “install a regime similar to that in Cuba.”

The Venezuelan president "believed that trade and diplomatic relations should be broken with the governments that came to power through coups, regardless of whether they were left or right.  Thus, in 1961, Venezuela broke relations with Cuba and became one of the promoters of the exclusion of the island from the OAS, which was achieved in January 1962."

However, the Castro regime continued to agitate for the overthrow of democracy in Venezuela with a strategic aim.

Cuban Communist leader Blas Roca, told a Havana rally on January 23, 1963 that when the communists gained full control and “make themselves owners of the great riches in oil, aluminum and everything their earth imprisons, then all of America shall burn.”  A cache of three tons of weapons was found on a Venezuelan beach in November 1963 that was to be used to disrupt the democratic elections there.

Fidel Castro would continue to agitate for revolution in Venezuela. A well documented incident occurred on May 8, 1967 and was reported by Francisco Toro in The Washington Post who described how: "two small boats carrying a dozen heavily armed fighters made landfall near Machurucuto, a tiny fishing village 100 miles east of the Venezuelan capital, Caracas. Their plan was to march inland and recruit Venezuelan peasants to the cause of socialist revolution." An all night gun battle with the Venezuelan military led to nine guerrillas dead, two captured, and one who had escaped.

For those opposed to foreign intervention in LatAm, for the life of me I cannot understand why they are not actively and loudly condemning the Cuban, Chinese, Russian destruction of #Venezuela...unless it's not actually anti-intervention that drives them, but anti-Americanism...
— Eric Farnsworth (@ericfarns) January 9, 2019

President Betancourt understood that the Castro regime was an existential threat to democracy in the Americas. During the Cuban Missile Crisis in 1962 he mobilized two Venezuelan destroyers and a submarine to take part in the quarantine of Cuba.

Betancourt's successor in the presidency, Raúl Leoni Otero, took over in 1964 and remained in office until 1969 and pursued the policy of containment and isolation. Failing to violently overthrow Venezuela's democracy, Fidel Castro publicly renounced the exportation of revolution (although he continued the practice -- see Nicaragua) and began making overtures to the Venezuelan government.

Venezuelan democrats forgot the nature of the Castro regime.

Diplomatic relations were restored between Venezuela and Cuba in December of 1974, oil deliveries resumed, and the democratic government of Venezuela under Carlos Andres Perez's first presidency advocated Cuba's readmission to the Organization of American States.

At the start of his second presidency (1988 - 1993), Carlos Andres Perez invited Fidel Castro to his inauguration.

Four years later, in a reaction to generalized disgust with the corruption endemic to the Venezuelan democratic order epitomized by the Carlos Andres Perez administration the former coup plotter was elected president.

President Caldera, who had pardoned Chavez, handed power over to him in 1999. Together with Fidel Castro, as a mentor, Chavez began the process of turning a flawed democratic order into the totalitarian regime it is today.

Official channels announced that Hugo Chavez died on March 5, 2013 and was replaced by Nicolas Maduro, a hardcore communist, an individual who spent a lot of time in his early 20s in Cuba being trained by the Union of Young Communists and Pedro Miret, an official close to Fidel Castro.

Over the past six years Maduro has proven himself to be Havana's man, and Venezuela has been turned into a second Cuba. Complete with fake elections that only underscore that democracy has departed that South American country.

On July 19, 2017 the Secretary General of the Organization of American States, Luis Almagro testified before US lawmakers that “[t]here are currently about 15,000 Cubans in Venezuela ... It’s like an occupation army from Cuba in Venezuela.”


Venezuela had a strong and vibrant democracy for forty years, that successfully defended itself from Castroism, promoted democracy in the region, but when it bought into the enemy's lies and mistook the Castro regime for a friend the die was cast for the tragedy currently unfolding. Young Venezuelans are today paying with their lives for the mistakes made by Venezuelan politicians a generation ago. 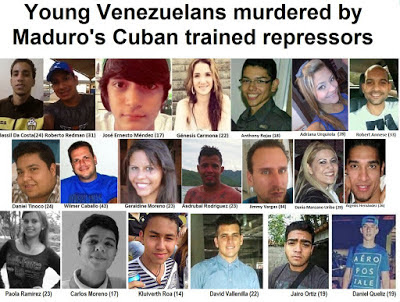 What can we outside of Venezuela do? Let others know what is taking place, demand the freedom of over 288 Venezuelan political prisoners, and tomorrow when the Maduro regime attempts to legitimize his dictatorial rule join Venezuelans in protest. 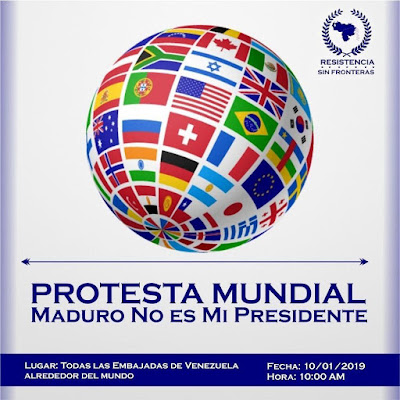