"It's up to all of us to try, and those that say that individuals are not capable of changing anything are only looking for excuses." - Vaclav Havel, Interview with Amnesty International in 2011

Eleven years ago on Christmas morning in Beijing the nonviolent dissident, scholar and Nobel Peace Prize Laureate Liu Xiaobo was sentenced to 11 years in prison for the crime of speaking. He had already been jailed for more than a year for being one of the authors of Charter 08 that sought to gather signatures in a petition calling on the Chinese regime to gradually shift toward democracy.
The speech he delivered at his trial on December 23, 2009 is one that remains extremely relevant today and more so on Christmas. In a key passage of his final statement Liu Xiaobo said the following:


But I still want to say to this regime, which is depriving me of my freedom, that I stand by the convictions I expressed in my "June Second Hunger Strike Declaration" twenty years ago ‑ I have no enemies and no hatred. None of the police who monitored, arrested, and interrogated me, none of the prosecutors who indicted me, and none of the judges who judged me are my enemies. Although there is no way I can accept your monitoring, arrests, indictments, and verdicts, I respect your professions and your integrity, including those of the two prosecutors, Zhang Rongge and Pan Xueqing, who are now bringing charges against me on behalf of the prosecution. During interrogation on December 3, I could sense your respect and your good faith.

Hatred can rot away at a person's intelligence and conscience. Enemy mentality will poison the spirit of a nation, incite cruel mortal struggles, destroy a society's tolerance and humanity, and hinder a nation's progress toward freedom and democracy. That is why I hope to be able to transcend my personal experiences as I look upon our nation's development and social change, to counter the regime's hostility with utmost goodwill, and to dispel hatred with love.

This decision to bust up hatred with love combined with the firmness and courage at the same time to reject and defy the injustices committed is not only a core principle of nonviolence but also of the gospel of Jesus Christ.

Jesus commands us to love our enemies, and pray for those who persecute us. When one says the Lord's prayer how many understand and internalize that "If you forgive others their transgressions, your heavenly Father will forgive you. But if you do not forgive others, neither will your Father forgive your transgressions." Liu Xiaobo in the statement above is doing just that.

In a Christmas Message delivered by the Christian Liberation Movement in 1990 and written by Oswaldo Payá Sardiñas although 19 years earlier and separated by great distance and different cultures the same message is found:


Let us not turn to violence and force, but we will not submit or allow ourselves to be intimidated by them. Yes, we want change, changes in all of society, because the heart of Cuba has already changed, and we have renovated it in hope, work, suffering and sorrow. We have renovated ourselves and do not want Cuba to sink and our children with her. That violence not explode, that repression not explode, that the truth break out, and let there be an outbreak of Peace and Freedom.

No one in Cuba wants to submit to a foreign power, or return to other forms of injustice. Let us not fool ourselves any more, Cubans know what we want: we want reconciliation among all, we want a reunion with our distant brothers in exile, we want to work for our Country and our families, with boundless generosity to our hard work and positive creativity, we want dialogue, we want to solve this juncture of our history together, with love, we want freedom. We know it is possible and we will achieve it, it will be everyone’s victory.

Oswaldo Payá was murdered by the Cuban regime's state security agents along with Harold Cepero on July 22, 2012 but he lived the above creed until the end, and the movement, he helped to found, continues to embrace these nonviolent principles.
They killed the man, but they could not kill his dream of a free Cuba. Ten years prior to his martyrdom on December 17, 2002 Oswaldo received the Sakharov Prize for Freedom of Thought in Strasbourg, France and reaffirmed his commitment to nonviolence as an instrument of change.

"We have not chosen the path of peace as a tactic, but because it is inseparable from the goal for which our people are striving. Experience teaches us that violence begets more violence and that when political change is brought about by such means, new forms of oppression and injustice arise. It is our wish that violence and force should never be used as ways of overcoming crises or toppling unjust governments. This time we shall bring about change by means of this civic movement which is already opening a new chapter in Cuba’s history, in which dialogue, democratic involvement, and solidarity will prevail. In such a way we shall foster genuine peace."

On December 28, 2016  Liu Xiaobo observed his 61st birthday and his ninth behind bars in a Chinese prison. He was a prisoner of conscience imprisoned in 2008 for his participation in the drafting of Charter 08. His wife, Liu Xia, had been under house arrest since 2010 when her husband won the Nobel Peace Prize. 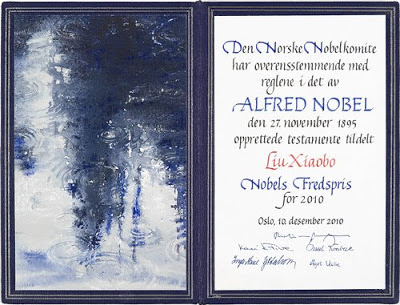 Norway was threatened by Communist China not to award the 2010 Nobel Peace Prize to Liu Xiaobo but courageously went ahead and did so. Relations between the two countries deteriorated. In addition the Chinese regime initiated its own "Peace Prize" in 2010 to counter Nobel's and Fidel Castro was the 2014 winner.

On July 13, 2017 Nobel Peace Prize Laureate Liu Xiaobo died of "multiple organ failure" while still under the custody of the Chinese communists. Friends and family expressed concern that he was not receiving proper medical care. Cuban human rights defenders have observed this type of death induced by medical neglect against dissidents before.


Liu Xiaobo was not only the best known freedom and democracy fighter of China, but, in life as well as in death, he represents the best of what China can ever be. In April 1989, when the Tiananmen democracy movement just broke out, he returned to Beijing from New York and became the most important intellectual leader of the movement. After the Tiananmen Massacre, he shouldered both moral and political responsibilities and continued to fight from inside China while many others left the country and even abandoned the movement. He was in and out prison and spent half of the past 28 years after the Tiananmen Massacre in incarceration. Never wavering in spirit, he shared the sufferings of his compatriots and gave his life for them. He is a martyr and saint.
Yes. Liu Xiaobo is a martyr and saint who possesses a moral authority that his persecutors can only envy. His legacy of love, justice, peace and sacrifice will surely far outlive the deeds of those who persecuted him.

The Communist regimes in China and Cuba fear those who speak truth to power but have also discovered that murdering those who freely express themselves does not silence their protests and new activists emerge.

In Cuba, the movement founded by Oswaldo Payá Sardiñas elected Eduardo Cardet Concepción the national coordinator of the Christian Liberation Movement. Eduardo has been arbitrarily detained since November 30, 2016 for offering a critical assessment of the legacy of Cuban dictator Fidel Castro. Amnesty International has recognized him a prisoner of conscience. He was beaten by political police then beaten again and repeatedly stabbed by inmates directed to do it by prison officials. Eduardo was finally freed on September 30, 2019. Oswaldo's daughter, Rosa Maria Payá Acevedo, carries on her dad's work with an initiative called CubaDecide.

In China, despite her husband's death Liu Xia remained under house arrest until July 10, 2018 when she went into exile in Germany. A French couple, Hu Jiamin and Marine Brossard, who on December 15, 2017 in Shenzhen, "painted a mural showing an empty blue chair at an art exhibition" in a tribute to Liu Xiaobo were taken away by secret police. They were released six days later on December 21, 2017.

Thirty years after the death of the Reverend Martin Luther King Jr., the former head of the NAACP, Benjamin Hooks on the holiday designated after the martyred civil rights leader in 1998 addressed an audience and explained: "You can kill the dreamer, but you can't kill the dream." This holds true today for Martin Luther King Jr., Oswaldo Payá Sardiñas and Liu Xiaobo. Their dreams and examples live on because they embraced love not hate.
Today, we are caught in a world wide pandemic that has killed over 1.72 million and people and the death count is still rising. The pandemic began in Wuhan, China and was made worse by Communist China silencing scientists, journalists, and other whistleblowers who sought to warn the world. Oswaldo Payá Sardiñas in the above mentioned 2002 Strasbourg speech warned that the failure of global solidarity and human rights would endanger human existence.

"The cause of human rights is a single cause, just as the people of the world are a single people. The talk today is of globalization, but we must state that unless there is global solidarity, not only human rights but also the right to remain human will be jeopardized. If there is no solidarity between people we will be unable to preserve a fair world in which it is possible to continue living as human beings."

Westerners had been warned for years that if Communist China did not change, the rest of the world would be changed, but cheap labor and big profits dulled the conscience of those who should have known better. Now the West and the rest of the world are reaping the whirlwind.
We live in a world of sin and darkness, yet we celebrate Christmas because there is hope. British theologian John Stott explained: “The essence of sin is man substituting himself for God, while the essence of salvation is God substituting himself for man.”This is the story of Christmas. The lyrics of "Oh Holy Night" written in 1855 underscores the hope at the heart of Christmas while recognizing the darkness in the world.
O holy night, the stars are brightly shining,
It is the night of the dear Saviour’s birth;
Long lay the world in sin and error pining,
'Till he appeared and the soul felt its worth.
A thrill of hope the weary world rejoices,
For yonder breaks a new and glorious morn; ...
John Suarez at 1:08 AM
Share