“This is for the lost souls of June 4th.” - Liu Xiaobo 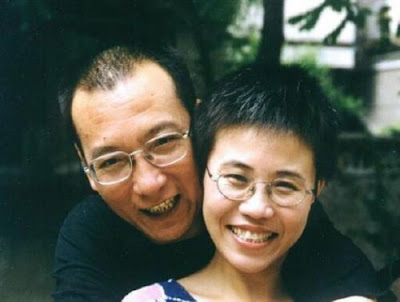 Liu Xiaobo and his wife Liu Xia
Liu Xiaobo was told by prison authorities on October 9th that he had won the Nobel Peace Prize. When he saw his wife Liu Xiaobo moved to tears dedicated the prize to the demonstrators killed in the June 4, 1989 Tiananmen Square massacre.

Liu Xia was placed under house arrest after returning home from visiting her imprisoned husband Liu Xiaobo, on obtaining his reaction to being honored with the Nobel Peace Prize. This was reported by her on Twitter on Saturday. Liu Xia is now unreachable by phone and Chinese state security blocked visitors from her home. Activists that wanted to gather and celebrate Liu Xiaobo’s award were also detained. Amnesty International has organized a campaign to demand Liu Xiaobo's freedom and an end to Liu Xia's restrictions on movement.

The dictators and tyrants of the world along with their apologists are trembling because the Nobel Committee granted the Nobel Peace Prize to Liu Xiaobo, an imprisoned Chinese dissident and the Nobel Prize in Literature to Mario Vargas Llosa, a defender of freedom and critic of dictatorship.

Today, the dictatorship in Cuba equated Cuban dissidents with the Chinese dissident awarded the prize. The regime’s spokesman did not do this to celebrate Cuba’s democratic opposition but to join with their Chinese counterparts in slandering and libeling those who dare dissent from the official regime line.

Yet, like a broken clock, when the regime drew an equivalence between Cuban and Chinese dissidents, a simple truth was revealed. It is a truth that can be seen in the similarities between Charter 77, the Varela Project, and Charter 08. Documents that challenged totalitarian regimes in Eastern Europe, Cuba, and China appealing to a process of reform to transition these regimes into democracies where human rights are respected.

Liu Xiaobo on December 23, 2009 made his final statement at the trial that would condemn him to 11 years in prison for exercising his freedom of expression stating:

“I have no enemies and no hatred. None of the police who monitored, arrested, and interrogated me, none of the prosecutors who indicted me, and none of the judges who judged me are my enemies.”

Oswaldo Paya Sardiñas addressing the European Parliament upon being awarded the Sakharov Prize for Freedom of Thought in Strasbourg, France on the December 17, 2002 declared:

"The first victory we can claim is that our hearts are free of hatred. Hence we say to those who persecute us and who try to dominate us: You are my brother. I do not hate you, but you are not going to dominate me by fear. I do not wish to impose my truth, nor do I wish you to impose yours on me.”

“To love one's neighbor is also to love one's enemy. Although in reality that qualifier-'enemy' does not exist in my vocabulary. I recognize that I only have adversaries and I have acquired the capacity to love them because in this way we do away with violence, wrath, vengeance, hatred and substitute them with justice and forgiveness.”

Separated both by thousands of miles and different traditions yet there is a profound similarity in their rejection of hatred and the concept of “the enemy.” These dissidents are all living within the truth which Vaclav Havel in his 1978 essay The Power of the Powerless offered this definition:

"When I speak of living within the truth, I naturally do not have in mind only products of conceptual thought, such as a protest or a letter written by a group of intellectuals. It can be any means by which a person or a group revolts against manipulation: anything from a letter by intellectuals to a workers' strike, from a rock concert to a student demonstration, from refusing to vote in the farcical elections to making an open speech at some official congress, or even a hunger strike, for instance."

Over the past few days large scale acts of repudiation have returned to Cuba perpetrated by agents of the regime against non-violent opponents. At the same time thousands of miles away in China the secret police gather up dissidents who want to celebrate their compatriot's Nobel Peace Prize and his wife has her phone blocked and is kept under house arrest.

All these measures demonstrate the weakness of the regimes in power that seek to perpetuate themselves by living in the lie. History has demonstrated that sooner or later they will fail, but one factor that can speed up that process is international solidarity and scrutiny. Join Amnesty International in their campaign for this prisoner of conscience and in defense of free expression and freedom of movement.

When I despair, I remember that all through history the ways of truth and love have always won. There have been tyrants, and murderers, and for a time they can seem invincible, but in the end they always fall. Think of it--always. - Mohandas Gandhi
Posted by John Suarez at 8:28 PM