Remembering Winston Churchill, the greatest Briton, who was anti-Nazi, anti-Communist and pro-freedom on anniversary of his death

"Fascism was the shadow or ugly child of communism… As Fascism sprang from Communism, so Nazism developed from Fascism. Thus were set on foot those kindred movements which were destined soon to plunge the world into more hideous strife, which none can say has ended with their destruction." - Winston Churchill, The Second World War, Volume 1, The Gathering Storm (1948) 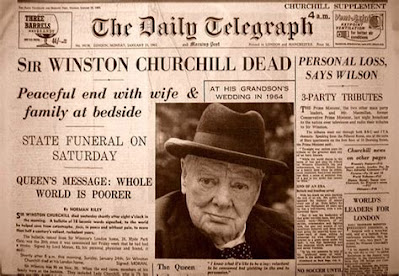 Sir Winston Churchill died 55 years ago on 24 January 1965 at 90 years of age. He was given a state funeral that lasted four days.

Sir Churchill was the man who twice saved democracy from Nazi and Soviet totalitarianism.  In 1940, the Battle of Britain's most decisive clash saw the Royal Air Force repel the largest Luftwaffe air strike against the United Kingdom. Months earlier on June 18, 1940 in a speech in The House of Commons titled "Their Finest Hour" Prime Minister Churchill explained the stakes of World War II and the start of the existential clash for Great Britain:


I expect that the Battle of Britain is about to begin. Upon this battle depends the survival of Christian civilization. Upon it depends our own British life, and the long continuity of our institutions and our Empire. The whole fury and might of the enemy must very soon be turned on us. Hitler knows that he will have to break us in this Island or lose the war. If we can stand up to him, all Europe may be free and the life of the world may move forward into broad, sunlit uplands. But if we fail, then the whole world, including the United States, including all that we have known and cared for, will sink into the abyss of a new Dark Age made more sinister, and perhaps more protracted, by the lights of perverted science. Let us therefore brace ourselves to our duties, and so bear ourselves that, if the British Empire and its Commonwealth last for a thousand years, men will still say, “This was their finest hour.”

The apologists for international communism  like to extol their so-called "antifascist"credentials while remaining silent or finding bizarre revisionist explanations to downplay or ignore the connections between fascism and communism. Sir. Churchill succinctly outlined this relationship in the quote at the top of the page.

Of even greater concern is the attempt to deny the fact that Adolf Hitler and Josef Stalin signed a pact in August of 1939, that secretly included the division of Central and Eastern Europe between Nazi Germany and Communist Russia, that started World War II.

Sir Winston Churchill died on this day in 1965.

The great wartime Prime Minister is remembered in the Abbey with a marble memorial stone near the Grave of the Unknown Warrior.

This alliance lasted until the summer of 1941 when Hitler ordered the invasion of the Soviet union.

Consider for a moment that it was Britain and France who honoring their alliance declared war on Nazi Germany on September 1, 1939 when Poland was invaded by Hitler's Third Reich.  Churchill did not equivocate and in a radio address on October 1, 1939 described the Russian's role as invaders along with the Nazis days after.


"Poland has been again overrun by two of the great Powers which held her in bondage for 150 years, but were unable to quench the spirit of the Polish nation. The heroic defense of Warsaw shows that the soul of Poland is indestructible, and that she will rise again like a rock, which may for a spell be submerged by a tidal wave, but which remains a rock."

Britain and France were convinced that Russia and Germany were allies and plans were drawn up to attack Russian oil fields in order to deny them to the Nazis in what became known in the planning stages as Operation Pike.  Months later the reversals continued for Christendom. The Fall of France to the Nazi war machine took place between May 10 and June 25, 1940 over the span of 46 days ending in the evacuation of Dunkirk. This disaster is what led to Operation Pike being scrapped.

The British Empire was alone for almost a year between June 25, 1940 through June 22, 1941 as the sole main resistance to Nazi Germany. The United States would remain neutral until Pearl Harbor on December 7, 1941 and the Soviet Union was a de facto ally of Nazi Germany until Hitler invaded communist Russia on June 22, 1941 in Operation Barbarossa. The United Kingdom was all that stood between the survival of Christian civilization and a new Dark Age that Adolf Hitler called the Thousand Year Reich. If one is truly Anti-Nazi then one must celebrate and honor the legacy of Winston Churchill, who early on identified the Nazi threat and issued calls to to resistance with one of the most important in a radio address to London and the United States on October 16, 1938.


"Dictatorship – the fetish worship of one man – is a passing phase. A state of society where men may not speak their minds, where children denounce their parents to the police, where a business man or small shopkeeper ruins his competitor by telling tales about his private opinions; such a state of society cannot long endure if brought into contact with the healthy outside world. The light of civilised progress with its tolerances and co-operation, with its dignities and joys, has often in the past been blotted out. But I hold the belief that we have now at last got far enough ahead of barbarism to control it, and to avert it, if only we realise what is afoot and make up our minds in time. We shall do it in the end. But how much harder our toil for every day’s delay! Is this a call to war? Does anyone pretend that preparation for resistance to aggression is unleashing war? I declare it to be the sole guarantee of peace. We need the swift gathering of forces to confront not only military but moral aggression; the resolute and sober acceptance of their duty by the English-speaking peoples and by all the nations, great and small, who wish to walk with them."

Four years earlier on November 16, 1934, after the Nazis had just been in power a little over two years Winston Churchill warned of their threat to peace:


There is a nation which has abandoned all its liberties in order to augment its collective strength. There is a nation which, with all its strength and virtue, is in the grip of a group of ruthless men, preaching a gospel of intolerance and racial pride, unrestrained by law, by parliament, or by public opinion. In that country all pacifist speeches, all morbid war books are forbidden or suppressed, and their authors rigorously imprisoned. From their new table of commandments they have omitted “thou shall not kill.”

Sadly the world did not listen to Churchill until it was too late to avoid a major conflict, but at least it was not too late to stop the Nazi war machine although it came at great cost and suffering. Churchill understood that to defeat Hitler the Soviet Union would have to change sides and when the Nazis invaded Russia the British Prime Minister joked, "If Hitler invaded Hell, I would at least make a favourable reference to the Devil in the House of Commons.” The price of ending Hitler was cozying up to Josef Stalin, another genocidal totalitarian monster.

Sir Winston Churchill, the war time prime minister, was voted out of office within weeks of the victory in Europe in 1945. The Labour Party left the national unity government and snap elections were held on July 5, 1945 and they won by a landslide.

When King George VI offered Churchill "the country’s highest honor, The Order of the Garter, Churchill declined, saying that he couldn’t possibly accept such an honor, as the British voters had given him the 'order of the boot.'"

But in opposition he continued to speak out on matters of great importance.

Churchill was not blind to the nature of his Russian wartime ally and understood the threat of Josef Stalin and the Soviet Union and thankfully his warnings on March 5, 1946 at Westminster College in Fulton Missouri were listened to this time and may have avoided World War III, albeit with a cold peace.


"From Stettin in the Baltic to Trieste in the Adriatic, an iron curtain has descended across the Continent. Behind that line lie all the capitals of the ancient states of Central and Eastern Europe. Warsaw, Berlin, Prague, Vienna, Budapest, Belgrade, Bucharest and Sofia, all these famous cities and the populations around them lie in what I must call the Soviet sphere, and all are subject in one form or another, not only to Soviet influence but to a very high and, in many cases, increasing measure of control from Moscow."

He then went on to make a remarkable statement about the circumstances that led to World War II and how it was completely avoidable:


Last time I saw it all coming and cried aloud to my own fellow-countrymen and to the world, but no one paid any attention. Up till the year 1933 or even 1935, Germany might have been saved from the awful fate which has overtaken her and we might all have been spared the miseries Hitler let loose upon mankind. There never was a war in all history easier to prevent by timely action than the one which has just desolated such great areas of the globe. It could have been prevented in my belief without the firing of a single shot, and Germany might be powerful, prosperous and honoured to-day; but no one would listen and one by one we were all sucked into the awful whirlpool. We surely must not let that happen again.

Churchill was not only an Anti-Nazi but also an Anti-Communist and a conservative who on May 24, 1948 observed: "Socialism is the philosophy of failure, the creed of ignorance and the gospel of envy." He also understood and celebrated the importance of free speech. In the midst of the war in 1943 he observed: "Everyone is in favour of free speech. Hardly a day passes without its being extolled, but some people's idea of it is that they are free to say what they like, but if anyone says anything back, that is an outrage."  Today let us remember this great statesman, democrat, and conservative and call on all people of good will to learn form this greatest of Britons.

Six years after his 1945 defeat, in 1951, Sir Winston Churchill and the Conservatives would win a snap election and return to Downing Street  as Prime Minister.  He had a close relationship with Queen Elisabeth II, and resigned from the Prime Ministership due to health issues in 1955 and retired from public life.

Attempts to cancel him posthumously need to be resisted, and this greatest of Britons remembered and honored for his service to country and the world.