Exposing one of the myths about the dictatorship in Cuba: Healthcare


The Late General, his son, and the imprisoned doctor
A tale of medicine and privilege in today's Cuba 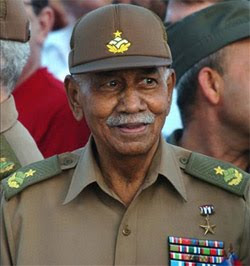 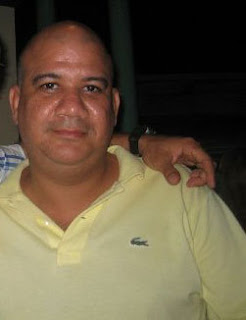 Juan Juan Almeida the ailing son of one of Cuba's "revolutionary heroes" the late Juan Almeida Bosque was taken into custody on Friday and detained by security officials for three days after protesting that authorities wouldn't let him leave the country for treatment. According to sources he suffers from a dangerous degenerative disease (rheumatoid spondylitis). Now according to National Arthritis.com the prognosis for this illness is good if treated. This raises two fundamental questions which this blog entry will attempt to answer: 1) Why can't he leave the country to obtain medical care and 2) If Cuba's health care is so wonderful why would the son of a revolutionary leader be seeking treatment outside of the country?

Question #1: Why is Juan Juan Almeida not able to leave the country to obtain life-saving medical treatment?

Answer: In any normal country in which Article 13 section (2) of the Universal Declaration of Human Rights is respected which states that: "Everyone has the right to leave any country, including his own, and to return to his country" Mr. Almeida, assuming he had the means could enter and exit his country freely. Cuba, however, is a totalitarian state that controls every aspect of an individuals existence much like North Korea and travel in and out of the country is strictly controlled. Cubans must ask the government for permission to cross outside the defined boundaries of Cuba by obtaining a “Travel Permit” and is known as “the white card” due to its color. 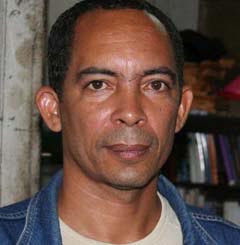 Question #2: Why would the son of the late revolutionary leader Juan Almeida be seeking healthcare outside of Cuba when official and international media along with travelers and filmmakers such as Michael Moore portray Cuba as a free health care paradise?

Answer: This question cannot be answered as quickly because there are a number of factors involved in the Juan Juan Almeida affair, but for the sake of brevity in this blog entry the focus will be on two of them. MTV's Kurt Loder offers a devastating expose of Micheal Moore's film Sicko where Mr. Loder quotes Cuban doctor Hilda Molina: "Cubans should be treated the same as foreigners. Cubans have less rights in their own country than foreigners who visit here." ABC's John Stossel offered a crushing rebuttal of Mr. Moores assertions:

The video Mr. Stossel refers to below with images of the two aspects of Cuba's healthcare system:

Cuba has a two tiered health care system one tier for the nomenklatura (which includes the sons and daughters of revolutionary leaders like Juan Juan Almeida) and foreign tourists with hard currency which is relatively good and offers care with modern equipment and fully stocked pharmacies, and then there is a second tier which is for everyone else which offers broken down equipment, run down buildings and rooms, and scarce supplies not to mention an appalling lack of hygiene and the denial of certain services and lengthy wait times. The statistics and numbers that the international community has access to with relation to the Cuban healthcare system have been manipulated by the dictatorship. Katherine Hirschfeld, an anthropologist, in Health, Politics, and Revolution in Cuba Since 1898 describes how her idealistic preconceptions were dashed by 'discrepancies between rhetoric and reality,' she observed a repressive, bureaucratized and secretive system, long on 'militarization' and short on patients' rights. This is a scholarly analyis that looks at the Cuban healthcare throughout Cuban history and offers a fair analysis. It is not a political tract. In conclusion, there is a health care system which is rather decent for regime elites and tourists and another one for everyday Cubans that is a disaster. A lot of the footage of the state of real health care in Cuba was provided by Dr. Darsi Ferrer who appears in some of the footage above, and here as well:

Dr. Ferrer is a clear example of why the truth of the Cuban healthcare system remains hidden. He spoke out and documented the reality of the situation and has suffered threats, beatings and has been imprisoned since July 21, 2009 without a trial. Others who have spoken out like Dr. Hilda Molina and Dr. Oscar Elias Biscet, a prisoner of conscience, serving a 25-year prison sentence have paid dearly for their dissent.

Nevertheless, that does not explain the plight of Juan Juan Almeida, the son of a high ranking "hero of the revolution" and a former member of the Ministry of the Interior. Reinaldo Escobar writing from Havana, Cuba offers an answer to this mystery:

Juan Juan Almeida was long favored because he enjoyed, in Cuba, a privilege that in any other place is merely a right: traveling the world. For a long time this problem of the travel permit was, for him, a procedure he paid no attention to, something like having to weigh your luggage at the airport. Any superficial analysis that might be made of his exceptional situation ended up concluding that this, and other benefits he then enjoyed, was due to his being the son of Juan Almeida Bosque, a select member of the highest revolutionary aristocracy, recently deceased.

One day J.J. fell into disgrace and they let him know that now his name was on another list, that of the excluded. Because of this, he is now not allowed to arrange a medical consultation at a hospital in Europe where, as he himself explains, he might have a chance to find a treatment for an illness that has found no solution in his own country. He wrote a book, conducted interviews, wrote letters, and last Friday, November 27, for the second time went out into the street with a poster on which, it is said, he asked for the resignation of the president of the Republic.

There you have the answer Juan Juan Almeida has fallen out of favor with the regime i.e. the Castro brothers and no longer has access to that world of top flight care and freedom of travel that belongs to the regime elite. He is now another Cuban citizen at the mercy of the nomenklatura that runs the island as its personal fiefdom as he once did but no longer can.