Heroes and Exemplars of 1989: Adam Michnik and Letters from Prison

The purpose of this brief profile is to encourage the reader to search further and read Michnik's collection of essays and watch the documentaries and films on the struggle of the Polish people to obtain and maintain their freedom, and in the process learn how to make the world a better place.


Video: Daniel Cohn-Bendit and Adam Michnik discuss the repercussions of 1968 at the University of Warsaw, 9th March 2008

On the Struggle Against Totalitarianism

The fighting man sometimes comes to resemble his adversary. If in the struggle against totalitarianism, one uses totalitarian methods, one imperceptibly alters the shape of one's cause. In the struggle against a monster, one can become a monster oneself. In such a case, even if one scores a victory, the battle is lost because a kingdom of monsters is created for oneself. Were it to happen that the external thing one fights ruins one internally, the struggle would have no meaning. [Michnik quotes Karl Jaspers] in Letters from Prison and Other Essays1987

On the role of the Catholic Church
Whoever wants such a Church, whoever expects these things from Catholic priests, is-- whether he likes it or not-- asking for the political reduction of the Christian religion. For we do not need a Church that is locked up, that is hidden behind the walls of a particular political ideology. We need an open Church, a Church that takes the whole world into the arms of the Cross. Letters from Prison and Other Essays 1987

On Dictatorships
I also realize that while condemning the dictatorships of [Rafael] Trujillo or [Augusto] Pinochet, I should remember the dictatorship of Fidel Castro. Brutal power is equally repugnant whether executed under a red banner or a black one.


Why did Solidarity renounce violence
Why did Solidarity renounce violence? This question returned time and again in my conversations with foreign observers. . . . No one in Poland is able to prove today that violence will help us to dislodge Soviet troops from Poland and to remove the Communists from power. The USSR has such enormous military power that confrontation is simply unthinkable. In other words: we have no guns. Letters from Prison and Other Essays reviewed in Commentary 1987

The Man of Iron

This Oscar nominee and winner of the Golden Palm award at the Cannes Film Festival is a riveting look at life in Gdansk, Poland in the years preceding the historic Solidarity movement. In August 1980, a journalist is sent to a strike at the Gdansk docks to gather damaging information about the organizers. But after witnessing their courage and conviction, he begins to see the possibility for change ... if others are willing to stand with them.

Difference between pacifism and nonviolence

"Pacifism as a mass movement aims to avoid suffering; pacifists often say that no cause is worth suffering or dying for. The ethos of Solidarity is based on an opposite premise—that there are causes worth suffering and dying for." Letter from Gdansk Prison" 1985
From Solidarity to Democracy WSJ November 6, 2009 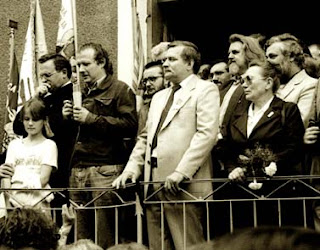 On the Ideal Society


"Solidarity has never had a vision of an ideal society. It wants to live and let live. Its ideals are closer to the American Revolution than the French." Letter from Gdansk Prison" 1985
From Solidarity to Democracy WSJ November 6, 2009 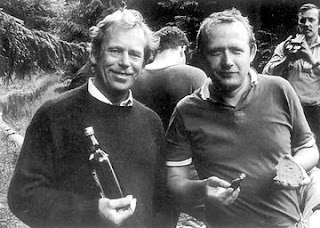 “I personally? I am personally afraid of myself. Afraid of doing something stupid or indecent. A man must always fear something. But in general I am a happy man. I have lived to see these times... We are perhaps the first generation over the whole century which can say our life is drawing to a successful close. For I was first imprisoned when I was 18. It was after 1965. Which of us could say at that time that we would see all that we have today: a free Poland, free Ukraine, and so on? Interview in The Day (June 19, 2001)

"Democracy is a daily plebiscite. Every day we decide whether we want to live in democracy or we don't want to. Whether we will defend it or we won't defend it."

From Solidarity to Democracy WSJ November 6, 2009