The Velvet Revolution at Twenty: Time for Reflection & Celebration 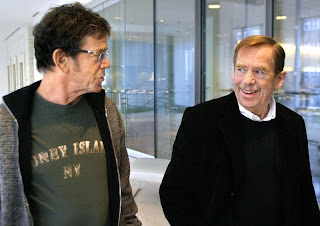 “One of the goals of this concert is to remind us of the importance of the music that was played not only here but also in all the countries that were liberating themselves. This music was with us at all the big rallies; it somehow expressed the general will and was one of the factors that created the atmosphere of the time.” - Vaclav Havel 2009

Celebrations across the world centered in Prague but as far away as Mongolia and in the United States just to name two of the many places: Houston and Kansas City will honor and remember the brave men and women who twenty years ago today began a series of actions that resulted in the triumph of love and truth. It was not inevitable, but a combination of providence, free will, and principled human action. The "Velvet Revolution" achieved profound non-violent change without wholesale slaughter and violence associated historically with revolutions. A cursory look would claim that the "revolution" took 11 days in November for the Communists to relinquish power. In reality it began at least in 1976 after beatings and arrest of the rock band the Plastic People of the Universe led to a number of intellectuals, Vaclav Havel, among them drafting and signing Charter 77 challenging the Czech communists to honor the rights outlined in their own constitution and in the Helsinki accords which the communist government had signed in 1975.

The great Indian reformer, Mohandas Gandhi, was critical of the revolutionary stating "I have criticized the revolutionary because I have felt for him. He has the same right to hold me to be in error as I believe him to be in error." He offered an additional insight that "Impatience will blur the revolutionary’s vision and lead him astray." This describes many of the revolutionaries of France in 1789 or the Bolsheviks in 1917 but it does not describe the men and women of 1989. On the other hand Gandhi spoke positively of reformers which sound much like dissidents: "A reformer has to sail not with the current, often he has to go against it, even though it may cost him his life." The Velvet Revolution has also been called a Spiritual Revolution and that again fits with Gandhi's description of a profound process reform born of an awakening when he says that: "Every Reform means awakening. Once truly awakened, the nation will not be satisfied with reform only in one department of life." What is described as the Velvet Revolution was a spiritual awakening that led to profound reforms of an entire society.


What was achieved in 1989? It was a rejection of totalitarianism of both the lie and hatred on which it thrived. It was a rebirth of freedom and of normal human relationships. I've had the privilege to have walked the streets and breathed the air of Prague in May of 1990, barely five months after Havel went to the Castle in December of 1989, and to return nearly twenty years later in October of 2009 to see the changes that had taken place. Although Czechs may no longer look in awe at all that they have accomplished after walking around the center of the city visiting shops and a grocery store, and talking with Czechs over a few beers I left impressed by all that had been accomplished, and with an overwhelming sense of happiness at bearing witness to a flowering of freedom and creativity. In his address to the European Parliament on November 11 Havel outlined the daunting challenges faced after the power transition:

A democratic political culture cannot be created or renewed overnight. It takes a lot of time and in the meantime there are plenty of unanticipated problems to be solved. Communism ruled just once in modern times (and, hopefully, for the last time), so the phenomenon of post-Communism was also a novelty. We had to confront the consequences of the rule of fear that lasted for so many years, as well as all the dangers related to a redistribution of property without precedent in history. So there were and are lots of obstacles and we are only now acquiring experience of such a state of affairs.

The preceding observation is not that of a wild eyed revolutionary but a prudent and principled reformer. Over the past few days the concerts, celebrations, and lectures in Prague and the reflections that the main participants in the events of 1989 have made and the conclusions they have reached should generate much dialogue and debate in the future. For example Vaclav Havel raised the call to vigilance at a conference at Charles University titled “Freedom and its Enemies”:

The era of dictatorships and totalitarian systems has not ended at all. It may have ended in a traditional form as we know it from the 20th century, but new, far more sophisticated ways of controlling society are being born. It requires alertness, carefulness, caution, study and a detached view.


Towards the end of the concert celebrating the Velvet Revolution at the Prague Crossroads titled “It’s Here at Last”, featuring Joan Baez, Suzanne Vega, Lou Reed and soprano Reneé Fleming, Václav Havel dedicated the last song of the concert, Oh Freedom, "to the people of North Korea, Burma, Tibet, Belarus, Iran, Darfur, Zimbabwe, Cuba, Venezuela and other countries whose citizens live under oppression."

Thank you President Havel for remembering the victims of repression at a moment of joyful celebration and for having consistently defended captive peoples around the world putting into action Aung San Suu Kyi’s request to "Please use your freedom to promote ours."