Fidel Castro, Carlos Franqui and the 1968 Invasion of Czechoslovakia

Totalitarian or authoritarian forms of government tend to have very inconspicuous beginnings and employ very ingenious means of controlling society. Only now, in hindsight, do many of us realise how deviously they were entangled in the totalitarian web. That all obliges us to be particularly circumspect. It should be the way we can help guarantee that what we endured will never be repeated. What does it require? -Vaclav Havel November 11, 2009 Brussels


Invasion and Occupation as described by Czech radio with images

One the eve of the 20th anniversary of the Velvet Revolution the Czech people are engaging in celebrations, acts of remembrance, and reflections as evidenced by Vaclav Havel's quote above. At the same time I think it is important for those of us still involved in struggles to end totalitarianism to take a look back to when Czechoslovakia had its Prague Spring in 1968 and look forward to today from this corner of the world which offers perhaps a different perspective. This is an initial attempt to do just that.

Two days after the Soviet led Warsaw Pact invasion of Czechoslovakia on August 23, 1968 Fidel Castro publicly supported the invasion and occupation this led to Carlos Franqui, one of the early backers of Fidel Castro's July 26 movement to break with the regime in 1968 over Castro's support of the invasion. Part of Castro's defense of the invasion and occupation was that basic human rights standards such as freedom of expression were being re-established or in Castro's words:

A series of slogans began to be put forward and in fact certain measures were taken such as the establishment of the bourgeois "freedom" of the press. This means that the counter-revolution and the exploiters, the very enemies of socialism, were granted the right to speak and write freely against socialism.

Video of The Prague Spring and Invasion 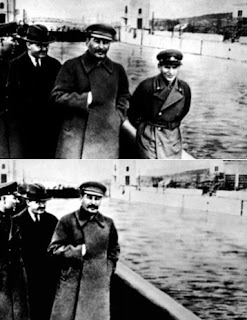 Carlos Franqui would then suffer a Stalinist erasure from Cuba's revolutionary history. Josef Stalin had pioneered airbrushing colleagues who had fallen out of favor. Nikolai Yezhov ,a Stalin loyalist, had written the treatise that intellectually justified the need for purges in 1935 and became head of the Soviet secret police (NKVD) in 1936. He staunchly maintained that it was better for "ten innocent people to suffer than one enemy of the people to escape." He presided over the execution of hundreds of thousands only to fall out of favor with Stalin in 1939 and disappear, but unlike Franqui, not just in official photos and publications, he was never heard from again.In picture to the left Nikolai Yezhov , appears next to Josef Stalin only to be airbrushed out in the picture directly below redone years later.

In the picture above Carlos Franqui appears on the right (in the middle of the picture) and is airbrushed out of the picture on the left. Franqui wrote a short poem about being erased:

Four decades later who would return to the Czech Republic which he had visited in the 1960 to contrast what he characterized the slave society of 1960s and the free society of today. He offered the following description of Prague in 1960 as he lived it:

The I saw in 1960 under communism was a with tense, dramatic people there were many police everywhere, gross corruption on the part of the regime. I came with a delegation of journalists and went to the hotel Jalta. There was a dance and there were very pretty young Czech girls ... Most of the journalists who were with me were good dancers and they began to dance. And they were very happy because they thought they were going to have an affair with these girls. But when the dance ended at midnight the girls told them that if they wanted to go with them that it would cost them the equivalent of thirty dollars. Then, as I was the treasurer of the delegation they came to borrow the money. I said I was sorry but could not justify it and they spent all night together with these girls. These girls told them that the police gave them apartments, and that they had to deliver foreign currency to the police chief the next day, that they had to ask the foreigners questions about politics, record and then deliver them . After that we went to the shops where only Tuzex could be purchased with foreign currency and actually saw official representatives doing the currency changes.

Contrasting with what he saw on his return to Prague in 2000:

I believe that slavery affects people in many ways. In countries where there is tyranny, where communism, normally people faces are tense, everybody is worried. It is difficult to find the relaxation, people simply smiling on the streets. And of course there were some great privileges among the Communist leaders, who lived as upper hierarchy, and people who had to work and obey. Now with what I have seen I have a different impression. It is clear that the heritage communism left is difficult to overcome because it is a legacy not only material but spiritual. Communism destroys the individual. And when the individual is free it is hard to recover the idea of being free. Under communism it is as if the state was the father of all the children. Then, to change that mentality is difficult but very important. A society can progress only through the efforts of all ... in all walks of life. [...] I think it was a country with a great industrial development, with a culture with certain traditions, which despite everything communism failed to destroy. I also think that having Václav Havel as a president has contributed mightily to create a balance, to solve serious problems like the thing with in a peaceful and civil manner.


Candlelight protest against communism in Prague