Cuba 2009: The Year of Dangerousness 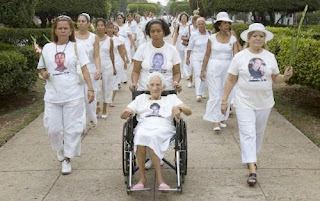 An important opportunity for the Cuban government to demonstrate that it was seeking to reform itself was presented in 2009. The international community and many watchers expected improvements and reforms with Raul Castro. He had been running things in a de facto manner since 2006 when Fidel Castro became deathly ill and formally took over head of state duties on February 24, 2008. As a member of the United Nations Human Rights Council the government of had made a number of commitments to be elected on the Council among them to submit to human rights instruments such as the Universal Periodic Review and invitations to special rapporteurs to visit the island and report their findings. In addition to international mechanisms the under the new Administration unilaterally loosened sanctions and extended an offer of a constructive dialogue which included scholarships for Cuban students to study at Universities in the .

The Universal Periodic Review is a peer review by countries done in a spirit to improve human rights conditions on the ground following a careful self-examination with the participation of civil society. According to the Geneva based Human Rights Tribune when Cuba underwent its review on February 6, 2009 and was questioned "by members of the Western group and some Latin American countries on violations of civil and political rights, the Cuban officials refused to commit to achieving progress, in contradiction with the spirit of the review." Although victims of the dictatorship where able to testify in a parallel forum at the time there voices were not heard in the main chamber because the review only permits states to ask questions and engage in a dialogue. The title of the article on the review was "Universal Periodic Review of Cuba: A Missed Opportunity" but it held out hope for Cuba to revisit the questions posed prior to the adoption of the report in June. When June arrived the Cuban government tried to stack the list of speakers to avoid having any critical questions asked, but failed and instead lashed out against Human Rights Watch and the Centrist Democrat International representatives who had made critical statements before the adoption of the final report.UN Watch on hand to witness what occurred reported:

In his testimony for CDI, former Cuban prisoner of conscience, Jose Gabriel RamonCastillo drew attention to the plight of hundreds of political prisoners and prisoners of conscience in Cuba. He cited 21 deaths in prisons because of medical negligence or psychological harassment, more than 500 cases of arbitrary arrests and 26 imprisonments of human rights defenders. “On behalf of the thousands of Cubans who are repressed tortured and whose fundamental rights are violated, I ask this Council to bring justice, and that this document should explain the real situation of human rights in Cuba,” he said.

This and one other speech for Castro’s victims were too much for the Cuban delegation who, in its closing remarks, accused them of serving imperialist interests. “Just as a swallow doesn’t mean there’s a summer, the noisy voices of those not-NGOs, but mercenaries in pay of the empire and defeated voice of counter-revolution, we regret they felt the need to come here and make the clown act. At any rate, we will continue to be victorious,” Cuba said.

The Special Rapporteur on Torture

In response to the commitments made to be eligible for membership on the UN Human Rights Council then Foreign Minister Felipe Perez Roque in January of 2009 announced that "Cuba will proceed in the course of the next week to extend an invitation to the (U.N.) special rapporteur on torture, Mr. Manfred Nowak, to visit our country in the course of the current year." The day after the Cuban Foreign Minister announced the intention to extend the invitation to him Nowak announced plans to make "unannounced" visits to all kinds of detention facilities while in Cuba stating: "The Cuban government knows perfectly well my conditions for visiting a country. I want to meet alone with prisoners and their families." Over the course of the year it became evident that the visit was not going to take place in 2009. In October the special rapporteur on torture expressed dissapointment that the visit had failed to authorize the visit, but is confident that it will be extended in 2010. Time will tell.

Free Scholarships for Americans and Ideological Purges for Cubans

Thirty students had their exit permits denied and some were expelled from the University they were attending in Cuba for accepting an opportunity to study in the United States. One of the expelled students offered to speak anonymously about what had occurred:

"I've been told that I have been expelled from the university and that I have a hearing pending with the Communist Youth, where I am to receive a temporary sanction due to the fact that, in self-criticism, I acknowledged having applied for the scholarship. [...]Our state of mind couldn't be worse. We feel unprotected. Nobody will defend us nor challenge the Cuban government to claim our right to exercise the option any university student in the world has.''

At the same time, unlike there Cuban counterparts, American students have been studying on scholarship in Cuba for years without a hitch beginning in the George W. Bush Administration and according to Scholarships.com there numbers are increasing and "have had success enrolling in Cuban programs. Recently, a medical student from Dallas opted to finish her degree in Havana because the Cuban school offered her a full scholarship, monthly stipend and room and board paid for by the Cuban Ministry of Public Health." On the other hand according to a University of Havana professor, who agreed to speak as long as not identified, said that "We are involved in a new process of control and ideological purges that resembles the worst moments and stages of the past."

Human Rights Watch released a 123 page report New Castro, Same Cuba that Raul Castro's first three years in power have been as brutal as his brother. According to Human Rights Watch, "In addition to imprisoning dissenters, Raúl Castro's government also enforces political conformity using beatings, short-term detention, public acts of repudiation, and the denial of work, among other tactics." Two high profile examples of two of these tactics were applied to Yoani Sanchez , Orlando Luis Pardo Lazo and a group of bloggers and later against her husband Reinaldo Escobar. Interviewed by the Daily Telegraph, Yoani Sanchez described her abduction and beating "I was on my way to a peaceful protest against violence with a few friends when it happened. A black car pulled up. The three men inside called out my name and told me to get in." On her Generation Y blog the entire affair is described with great detain and continues:

I refused to get into the bright Geely-made car and we demanded they show us identification or a warrant to take us. Of course they didn’t show us any papers to prove the legitimacy of our arrest. The curious crowded around and I shouted, “Help, these men want to kidnap us,” but they stopped those who wanted to intervene with a shout that revealed the whole ideological background of the operation, “Don’t mess with it, these are counterrevolutionaries.” In the face of our verbal resistance they made a phone call and said to someone who must have been the boss, “What do we do? They don’t want to get in the car.” I imagine the answer from the other side was unequivocal, because then came a flurry of punches and pushes, they got me with my head down and tried to push me into the car. I held onto the door… blows to my knuckles…

Returning to the interview she said that "They were saying, 'It's all over, Yoani.' I really thought they were going to kill me."Both she and Orlando Luis Pardo Lazo were badly beaten and deposited back on the street two bruised human heaps. Outraged at the abduction and beating of his wife Reinaldo Escobar challenged one of the agents they were able to identify to meet him at the corner of 23 and G in Havana (were the peace protest had taken place a week earlier) to have a verbal duel over what had occurred. He set the date and time and arrived to be recieved by an act of repudiation organized by State Security and along with a small group of friends was shouted down and physically assaulted by the government organized mob. This time international media such as CNN documented the attack:

On November 6, 2009 the InterAmerican Commission on Human Rights conducted hearings on torture and extra-judicial killings in Cuba and systematic patterns of government abuse and intimidation to cover it up: Two instances that were presented first, a journalist’s wife found her husband dead under a tree after he had received numerous death threats. When she tried to get more information from the government, she was told that he had had a heart attack. Second, the family of another prisoner who died was told that he had committed suicide in prison; however, other prisoners had seen the man severely beaten by police hours before he supposedly killed himself.

The Cuban government's behavior towards Afro-Cubans has finally caught up with the regime. The arrest of Dr. Darsi Ferrer on July 21 led to international attention from Reporters Without Borders, Committee of Concerned Scientists and the Inter-American Press Association and caught the attention of historic Afro-Brazilian civil rights pioneer Abdias Nascimento and 60 prominent African Americans among them Cornel West, Jeremiah A. Wright and Ruby Dee Davis. They have condemned the repression and harassment of Cuban civil rights leaders and are demanding Darsi Ferrer's immediate release and recognition as a political prisoner.

Dangerousness as the New Thought Crime

Human Rights Watch in the report mentioned above analyzes the use of the Dangerousness provision of the Cuban Criminal Code that allows for individuals to be imprisoned before they commit a crime. According to Human Rights Watch:

This “dangerousness” provision is overtly political, defining as “dangerous” any behavior that contradicts socialist norms. The most Orwellian of Cuba’s laws, it captures the essence of the Cuban government’s repressive mindset, which views anyone who acts out of step with the government as a potential threat and thus worthy of punishment. Despite significant obstacles to research, Human Rights Watch documented more than 40 cases in which Cuba has imprisoned individuals for “dangerousness” under Raúl Castro because they tried to exercise their fundamental rights.

A review of the actions taken by the Cuban government in 2009 reveals an unpopular regime at home seeking to hang on to power and not reforming itself on the contrary returning to past brutal practices already condemned by the international community. The arrest of scores of Cubans for "dangerousness" makes 2009 the year of dangerousness and organizing a mob to harass the mothers, wives, sisters, and daughters of prisoners of conscience a shameful reflection of a morally bankrupt regime.