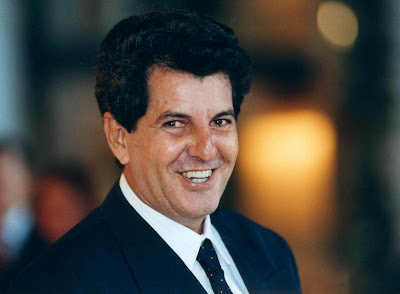 First of all, I should like to express my thanks to Mr. Pat Cox, President, and to this Parliament in which the many peoples of Europe are represented.

You have awarded the Andrei Sakharov Prize to the people of Cuba. I say “the people of Cuba” because they are the ones who so richly deserve such an award. I say it without excluding any of my fellow countrymen, irrespective of their political stance, because rights have no political, racial or cultural hue. Nor have dictatorships any political color: they are neither right-wing nor left-wing, they are merely dictatorships. In my country there are thousands of men and women who are fighting in the midst of persecution for the rights of all Cubans. Hundreds of them have been imprisoned solely for having proclaimed and stood up for those rights, and this is why I am receiving this award on their behalf.

I say that this prize is for all Cubans because I believe that, in awarding it, Europe wishes to say to them: “You too are entitled to rights.”

This is something which we have always firmly believed, but there are times when this truth has seemed to be less than self-evident to many of the world’s people.

I have not come here to ask you to support those who oppose the Cuban Government or to condemn those who persecute us. It is of no help to Cuba that some people in the world side with the country’s government or with the latter’s opponents on the basis of an ideological standpoint. We want others to side with the Cuban people - with all Cubans – and this means upholding all their rights, supporting openness, supporting our demand that our people should be consulted via the ballot box regarding the changes we are calling for. We are asking for solidarity so that our people can be given an opportunity to speak through the ballot box, as proposed in the Varela Project.

Many people have linked this prize to the Varela Project, and rightly so, since the thousands of Cubans who, in the midst of repression, have signed the petition calling for a referendum are making a decisive contribution to bringing about the changes which Cuba needs. Those changes would mean involvement in cultural and economic life, civil and political rights, and national reconciliation. That would constitute a genuine exercise in self-determination by our people. We must reject the myth that we Cubans have to live without rights in order to support our country’s independence and sovereignty.

Father Felix Varela has taught us that independence and national sovereignty are inseparable from the exercise of basic rights. We Cubans – whether we live in Cuba or in the diaspora – are a single people and we have both the determination and the ability to build a just, free and democratic society, without hatred and without the desire for revenge. In the words of José Marti, ‘With everyone and for everyone’s benefit’.

We have not chosen the path of peace as a tactic, but because it is inseparable from the goal for which our people are striving. Experience teaches us that violence begets more violence and that when political change is brought about by such means, new forms of oppression and injustice arise. It is our wish that violence and force should never be used as ways of overcoming crises or toppling unjust governments. This time we shall bring about change by means of this civic movement which is already opening a new chapter in Cuba’s history, in which dialogue, democratic involvement, and solidarity will prevail. In such a way we shall foster genuine peace. Cuba’s civic combatant heroes – the ordinary people who have signed the Varela Project – carry no weapons. Not a single hand is armed. We walk with both arms outstretched, offering our hands to all Cubans as brothers and sisters, and to all peoples of the world.

The first victory we can claim is that our hearts are free of hatred. Hence we say to those who persecute us and who try to dominate us: ‘You are my brother. I do not hate you, but you are not going to dominate me by fear. I do not wish to impose my truth, nor do I wish you to impose yours on me. We are going to seek the truth together’. THIS IS THE LIBERATION WHICH WE ARE PROCLAIMING.

There are still those who perpetuate the myth that the exercising of political and civil rights is an alternative to a society’s ability to achieve social justice and development. They are not mutually exclusive. The absence of any civil and political rights in Cuba has had serious consequences such as inequality, the poverty of the majority and privileges of a minority and the deterioration of certain services, even though these were conceived as a positive system to benefit the people. In this way, although many Cubans have for years worked out of love and in good faith, the situation as regards civil and political rights is now serious, quite apart from a widening inequality and the deterioration in the quality of life of the majority of the population. Among other things, the freedom of action of the citizens of Cuba has been limited, which has neutralized their huge potential for creativity and productiveness and is the main reason for the country’s poverty.

This state of affairs cannot be justified by saying that the Cuban people have adopted this system out of choice. You all know that none of the peoples represented in this Parliament, and no people in the world, would ever give up the right to exercise their fundamental freedoms.

It is becoming increasingly apparent that well-being and economic and social progress are the fruits of being able to exercise one’s rights. In the same way, a democracy is not genuine and complete if it cannot initiate and sustain a process that raises the quality of life of all its citizens, because no people would freely vote for the kind of poverty and inequality that results in the masses becoming disadvantaged and marginalized. The peoples of Latin America are calling for a genuine democracy which will enable justice to be established. It is scandalous that methods intended to overcome a crisis and end poverty can be applied in the name of efficiency when in reality they threaten to obliterate the poor. I cannot claim to herald new positions or propose new models, but the people of Cuba have lived and suffered under various political and economic systems.

We now know that any method or model which purportedly aims to achieve justice, development, and efficiency but takes precedence over the individual or cancels out any of the fundamental rights leads to a form of oppression and to exclusion and is calamitous for the people. We wish to express our solidarity with all those who suffer from any form of oppression and injustice, and with those in the world who have been silenced or marginalized.

The cause of human rights is a single cause, just as the people of the world are a single people. The talk today is of globalization, but we must state that unless there is global solidarity, not only human rights but also the right to remain human will be jeopardized. If there is no solidarity between people we will be unable to preserve a fair world in which it is possible to continue living as human beings. I therefore humbly believe that rather than new models, both for societies and for relations between countries, what we need is a new spirit.

This new spirit, which should find expression in solidarity, cooperation, and justice in the relations between countries, will not impede development, because if policies and models are made secondary to personal realization and the establishment of justice and democracy, and if policies are humanized, we will bridge the gulfs that divide peoples and will become a true human family.

We bring from Cuba a message of peace and solidarity for all peoples. The people of Cuba accept this prize with dignity and in the hope that we can rebuild our society with love for all, as brothers, and as children of God. Cubans are straightforward people and want nothing more than to live in peace and progress in our work, but WE CANNOT, WE DO NOT KNOW HOW TO, AND WE DO NOT WANT TO LIVE WITHOUT FREEDOM.

We dedicate this prize and our hopes to the Lord Jesus, born in a lowly manger.

Thank you and Merry Christmas.
Posted by John Suarez at 10:52 PM