Cuba Sanctions: The Importance of Right Intentions and Moral Means

“The salvation of this human world lies nowhere else than in the human heart, in the human power to reflect, in human meekness and human responsibility.” - Václav Havel 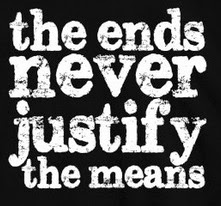 It has been said that "the road to Hell is paved with good intentions," but often times they are selfish motives disguised as good intentions. Furthermore, Mohandas Gandhi understood that there is no such thing as the "ends justifying the means" when he wrote: “They say, 'means are, after all, means'. I would say, 'means are, after all, everything'. As the means so the end.” Immoral means lead to immoral ends no matter what the "good intentions" might be under the guise of the supposed end objective.

Right Intention means neither pursuing policies out of a desire for revenge nor collaborating with evil in the pursuit of profit. Mohandas Gandhi said that “Real noncooperation is noncooperation with evil, and not with the evildoer” and  Michael Nagler in  The Nonviolence Handbook: A Guide for Practical Action reproduced Gandhi's explanation on how he would apply it in a real world scenario:

This was seen in action in Czechoslovakia when Soviet troops invaded in 1968 and Czechs disobeyed but at the same time tried not to harbor anger toward the soldiers as people. Gene Sharp calls it an example of a Civilian Based Defense.

What does this have to do with the question of economic sanctions on Cuba?

A strategy of sanctions that seeks to harm the population into revolt is immoral as is playing the humanitarian card to lift sanctions and enter into business with the oppressor.

A brief history of sanctions on Cuba

What is known as the Cuban Embargo began On January 3, 1961 when President Dwight D. Eisenhower suspended trade with Cuba, a few days after his administration broke diplomatic relations with the country. The embargo on Cuba since its inception has meant restrictions on trade and travel to the island by U.S. citizens and in practice has been a partial embargo. Over the decades these sanctions have been loosened and tightened depending on the circumstances at the time.

An actual embargo would mean that there is a complete ban on or prohibition of trade by the United States with Cuba. This is not the case. What you have in Cuba is a partial embargo which is exactly the same in definition as economic sanctions. Between January 2000 and December 2012 according to the United States Census Bureau there has been $4,318,906.00 in U.S. trade in goods with Cuba.

The ban on U.S. imports from Cuba remains but U.S. exports to Cuba have been going on since 1992 with the amounts dramatically increasing since 2002 reaching its peak in exports to Cuba under the Bush Administration in 2008. Despite loosening restrictions further under the Obama Administration trade with Cuba has dropped to 363.3 million dollars in 2011 and figures for 2012 show a slight improvement with total sales to the island at $337.5 million as of September. This is not a total embargo but a partial one in which the United States is one of Cuba’s top trading partners.

Meanwhile countries that do not have sanctions in place, which includes restrictions on granting credits such as Russia, Venezuela, China, Japan, Spain, Argentina, France, Romania, Brazil, Italy, and Mexico are owed billions of dollars. Russia is forgiving $29 billion dollars of debt that the Castro regime owed it and Mexico is waiving 487 million dollars of debt owed by the regime in Havana. Where do you think the United States would be on this list if sanctions were lifted and credits became available to the Castro regime? How much would U.S. taxpayers have to shell out?

At the same time Cuban exiles, many committed to maintaining economic sanctions against the dictatorship, are also a main source of remittances to their families on the island totaling hundreds of millions of dollars per year.  The intention of the embargo on Cuba is not to harm Cubans but to limit hard currency to the dictatorship.  The aim of the embargo initially, during the Cold War, was to penalize the Castro regime for seizing U.S. properties and limit its ability to fund armed guerrillas and terrorist groups in the region aimed at toppling friendly governments. With the exception of the Sandinistas in Nicaragua in 1979 this policy was a success in the Americas.

Following the collapse of the Soviet Union changes were made to sanctions policies that sought in the 1992 Torricelli Bill and 1996 Helms Burton Bill to make clear that sanctions would remain in effect until all political prisoners were freed, the government tolerated a political opposition and free elections were held. Funds were also set aside by Congress to assist through development assistance independent civil society. In addition Congress in the 1980s established Radio/TV Marti to break the information monopoly of the dictatorship. Also in the late 1980s the United States led an effort at the U.N. Human Rights Commission to expose the systematic human rights abuses on the island and hold the Cuban dictatorship to greater scrutiny.

The result of what amounted to a tightening of sanctions and redirecting them from Cold War considerations to a pro-democracy effort combined with diplomacy was to provide protection to Cuban dissidents on the island, along with the means to reach the populace via radio while also setting up licensing to permit the sending of humanitarian and technical assistance to dissidents by civil society groups in the United States. This led to the growth of the pro-democracy movement on the island and greater support for it internationally.

Policies have consequences: The Obama Administration
The loosening of sanctions and the lower profile on the international front has meant that the regime has not had to face the same level of accountability that it did back in 2003 for example. During the Black Cuban Spring of 2003 the international community’s response caught the Castro dictatorship by surprise with a sustained campaign to release 75 Cuban prisoners of conscience arrested during the March 18 crackdown and sentenced up to 28 years in prison.

None of the 75 are serving their sentences in a Cuban prison today. However, today in Vietnam there are still at least 70 prisoners of conscience imprisoned despite normalized relations with the United States. So what have we witnessed in Cuba over the past four years with the Obama Administration's Cuba policy? The deaths, under suspicious circumstances, of national opposition figures such as Laura Inés Pollán Toledo and Oswaldo José Payá Sardiñas; The deaths of Orlando Zapata Tamayo and Wilman Villar Mendoza, human rights defenders on hunger strike in the custody of the Cuban authorities; and, an increase both in the number of detentions and the degree of violence used against nonviolent activists.

Another is that of American Alan Gross, arrested on December 3, 2009 and sentenced to 15 years in a Cuban prison. He spent 25 days in a Havana jail before being visited by a U.S. diplomat. By that time Alan Gross had been approached by a Cuban “attorney” who just happened to be representing five Cuban spies imprisoned in the United States for espionage and conspiracy to commit murder. Alan Gross’s supposed crime: Attempting to provide Internet access to the local Jewish community in Cuba. The reality is that he is a pawn of the Castro regime to be used in pressuring concessions from the Obama Administration.
The Administration dangled several offers to the Castro regime and made a unilateral concession:
On the other side of the ledger the Cuban dictatorship did not suffer any repercussions for arbitrarily detaining a U.S. citizen. Alan Gross remains incarcerated to this day and December 3, 2013 marked his fourth year in captivity as an American hostage of the Castro regime. Looking beyond Cuba to China, Vietnam, and Burma, we are presented with a cautionary tale on lifting sanctions unconditionally. In China and Vietnam the United States lifted sanctions, effectively de-linking human rights considerations from economic ones. The result has been a deterioration of human rights standards in both countries.

In Burma, on the other hand, where sanctions were maintained, there have been signs of improvement in rights protections. The military junta, after years of trying to manipulate its way out from under them, has had to recognize the political opposition and provide a space for them in Burma's parliament. Things are still far from perfect, but there is hope that serious and permanent reforms are underway. The ability of Aung San Suu Kyi to run for public office, and for an independent press to begin to operate in Burma following decades of systematic censorship and control, are both positive signs. Aung San Suu Kyi has been clear about the importance of sanctions and of confronting those that would engage the dictatorship at the expense of the human rights of the Burmese people:


“Investment that only goes to enrich an already wealthy elite bent on monopolizing both economic and political power cannot contribute toward égalité and justice, the foundation stones for a sound democracy. I would therefore like to call upon those who have an interest in expanding their capacity for promoting intellectual freedom and humanitarian ideals to take a principled stand against companies that are doing business with the Burmese military regime. Please use your liberty to promote ours.”

Prominent Cuban-American businessmen have also spoken out against unconditionally lifting sanctions in Cuba, stating in a letter titled “Commitment to Freedom” that “absent the dismantling of the totalitarian apparatus on the island, along with the unconditional release of all political prisoners and the restoration of fundamental human rights, there should be no U.S. unilateral concessions to the Castro regime." They, like Aung San Suu Kyi believe that it is unprincipled for companies to do business with a dictatorship exploiting the suffering of an oppressed people. Things are improving in Burma on the human rights front, while relations are worsening in China and Vietnam. Linking human rights with economic engagement has been a winning formula in Burma- and there’s hope that it can be in Cuba as well.
Posted by John Suarez at 12:55 AM