"Two years and nine months since the unexplained deaths of Harold and Oswaldo. We continue to demand an investigation for justice and an end to impunity."- Christian Liberation Movement over twitter on April 22, 2015 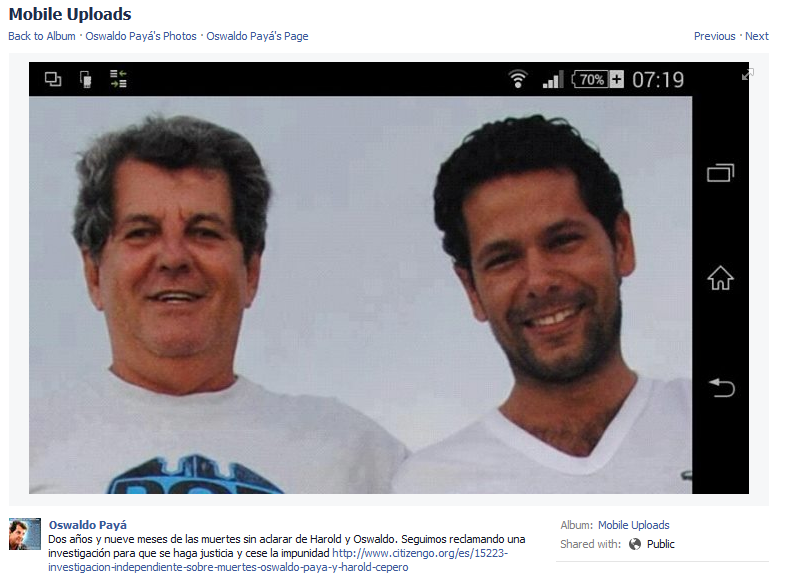 Oswaldo Payá Sardiñas spoke truth to power his entire life. On March 30, 2012, speaking on behalf of the Christian Liberation Movement he warned how the dictatorship would use the resources of the Cuban diaspora to perpetuate itself in power condemning it:


Our Movement denounces the regime's attempt to impose a fraudulent change, i.e. change without rights and the inclusion of many interests in this change that sidesteps democracy and the sovereignty of the people of Cuba. The attempt to link the Diaspora in this fraudulent change is to make victims participate in their own oppression. The Diaspora does not have to "assume attitudes and policies in entering the social activity of the island." The Diaspora is a Diaspora because they are Cuban exiles to which the regime denied rights as it denies them to all Cubans. It is not in that part of oppression, without rights, and transparency that the Diaspora has to be inserted, that would be part of fraudulent change.

The gradual approach makes sense only if there are transparent prospects of freedom and rights. We Cubans have a right to our rights. Why not rights? It's time. That is the peaceful change that we promote and claim. Changes that signifies freedom, reconciliation, political pluralism and free elections. Then the Diaspora will cease being a Diaspora, because all Cubans will have rights in their own free and sovereign country. That is why we fight.

Less than four months later he was killed, along with Christian Liberation Movement youth leader Harold Cepero in what now appears to have been an extrajudicial killing carried out by Cuban state security.

The key to liberation in a nonviolent struggle was first formulated theoretically in 1548 and today over twitter Rosa María Payá quoted a key passage from that important work on strategic nonviolence:


"I don't ask that you push or topple  the tyrant, but simply that you support him no longer." - Etienne de La Boetie, 1548

Etienne de La Boetie's call from 1548 was echoed by Oswaldo Payá Sardiñas when he denounced the attempt "to make victims participate in their own oppression." Change occurs not by fighting or resisting the dictatorship, but by ending one's participation in one's own oppression. This is a powerful and nonviolent idea that poises an existential threat to the Castro dictatorship in Cuba.
Posted by John Suarez at 11:43 PM