Why the Obama policy will worsen human rights in Cuba and the Americas: A rebuttal

Between 1959 and the present the only two times that the International Committee of the Red Cross was able to  inspect Cuban prisons and their conditions were in 1988 and 1989 following the tightening of sanctions and isolation policies of the Reagan administration.

Jose Miguel Vivanco's essay in Time Magazine titled "Lifting the Embargo Means Cuba Can No Longer Play Victim" gets a lot of things wrong, but let me begin with what the Americas director at Human Rights Watch gets more or less right when he states that:


"For decades, U.S. authorities stubbornly held that the embargo was necessary to promote human rights and democratic change in the island."

More accurately, U.S. politicians have used the above rhetoric in an attempt to appear like they were doing more than they were actually doing. This is not a practice limited to U.S.-Cuba policy.  The reality is that the aim of economic sanctions on Cuba as laid out as State Department policy in the early 1960s was a policy of containment and it worked while the United States was serious about pursuing it:  contributed to the economic implosion of the Soviet Union by raising the cost of subsidizing the Castro regime; demonstrated to other countries that expropriating U.S. businesses and properties had a cost; and saved U.S taxpayers billions of dollars that their Canadian, European and Latin American counterparts had to pay out when the regime proved to be a terrible credit risk time and time again. It is surprising that Mr. Vivanco overlooks these beneficial consequences of  the U.S. policy the Obama administration wants to scrap.

Mr. Vivanco also overlooks that the Obama administration, not only began to loosen sanctions on the Castro regime in April of 2009, but also refused to meet in June of 2009 with the winners of the NED Democracy Award who happened to be five Cuban dissidents that year. It was the first time in five years that the president of the United States had not met with the award laureates. In December of 2009 the Castro regime took Alan Gross hostage and the Obama administration responded with initial silence and it took American diplomats 25 days to visit with the arbitrarily detained American. 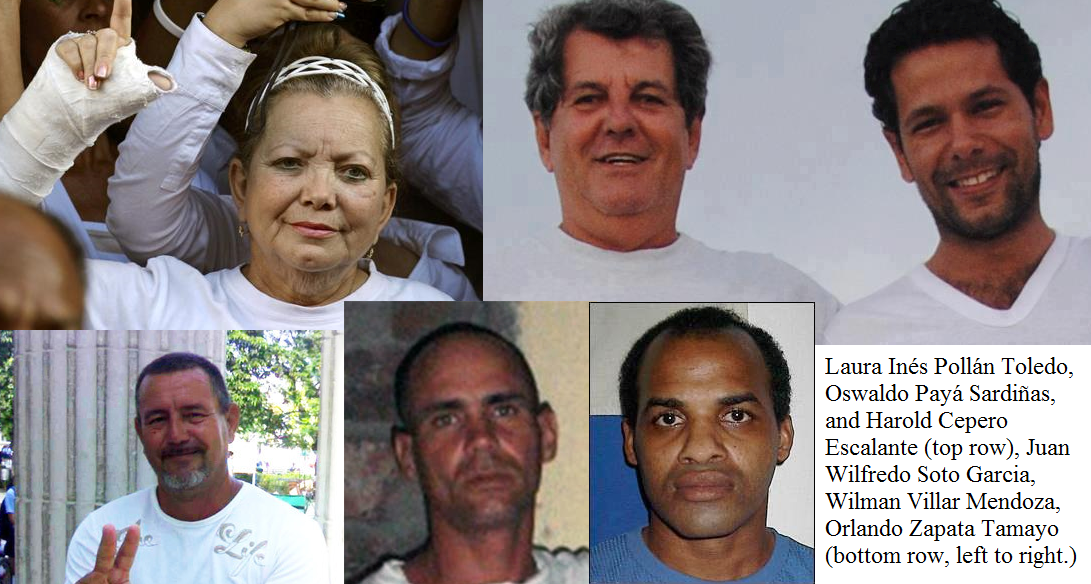 Unfortunately, its not only Human Rights Watch that has not addressed what appear to be extrajudicial killings and physical assaults with machetes that have disfigured activists in the past couple of years goes unmentioned. Human Rights Foundation commissioned a study that found that from 2000 to 2014, Amnesty International’s Americas chapter "spent 56.5 percent of its output decrying U.S. injustices, but only 4.3 percent on a stone-cold dictatorship like Cuba that, up until last year, still had 114 political prisoners."

The Obama administration responded to the taking of Alan Gross (2009) and the death of prisoner of conscience Orlando Zapata Tamayo (2010) by further loosening sanctions on the Castro regime in January of 2011.  The number of high profile activists who died under suspicious circumstances after the second round of loosening of sanctions should give one pause in Mr. Vivanco's optimism with the administration's new policy.


On 22 July 2012, Cuban State Security detained the car in which my father, Oswaldo Payá, and my friend Harold Cepero, along with two young European politicians, were traveling. All of them survived, but my father disappeared for hours only to reappear dead, in the hospital in which Harold would die without medical attention.

The Cuban government wouldn’t have dared to carry out its death threats against my father if the US government and the democratic world had been showing solidarity. If you turn your face, impunity rages. While you slept, the regime was conceiving their cleansing of the pro-democracy leaders to come. While you sleep, a second generation of dictators is planning with impunity their next crimes.

Mr. Vivanco claims that when it comes to the unilateral approach "[e]mpirical evidence shows that it was irrational to continue insisting on a policy that never achieved its proposed objectives," but history demonstrates otherwise. For the first time since 1959 the International Committee of the Red Cross was able to inspect Cuban prisons in 1988 and 1989. The last time that Amnesty International was allowed into Cuba by the Castro regime was in 1990 and in the case of Human Rights Watch 1995.  This was after the Reagan Administration undid the policies of the Carter administration and tightened sanctions on Cuba, engaged in aggressive diplomacy internationally, in 1982 placed Cuba on the list of state sponsors of terrorism, and broke the information monopoly inside Cuba with Radio Marti.  Human rights groups were welcomed back in the midst of a very different policy then the current one advocated by the White House. Human rights organizations were not invited to Cuba during the 2000 loosening of sanctions and diplomatic outreach by the Clinton administration. It will be interesting to see if this time the pattern changes or continues to be repeated umder the Obama administration.

Fidel Castro overthrew the Batista regime on January 1, 1959 following a U.S. arms blockade being imposed on the military dictator. On January 7, 1959 the United States recognized the new Cuban government ushered in by the Castro brothers and had actively pressured Batista to leave imposing an arms embargo in 1958. The United States thought that it could have normal relations with the Cuban revolutionary government which was also a reason for recognition within the span of a week. In comparison it had taken the United States 17 days to recognize the government of Fulgencio Batista following his March 10, 1952 coup. The United States had not been consulted ahead of time about Batista's coup and this led to the delay in recognition.

On March 3, 1959 the Castro regime expropriates properties belonging to the International Telephone and Telegraph Company, and took over its affiliate, the Cuban Telephone Company. On May 17, 1959 the government expropriated farm lands over 1,000 acres and banned land ownership by foreigners. On February 6, 1960 talks begin publicly between the U.S.S.R and Fidel Castro. The Soviet Union agreed to buy five million tons of sugar over five years. They also agreed to support Cuba with oil, grain, and credit. On July 6, 1960 the Castro regime passed a nationalization law authorizing nationalization of U.S.-owned property through expropriation. Texaco, Esso, and Shell oil refineries were taken. These policies combined with the Castro regime engaging the Soviet Union led the Eisenhower administration towards an embargo on Cuba and in 1960 exploring options to overthrow the new dictatorship that ended in the Kennedy Administration first with the Bay of Pigs fiasco and later Operation Mongoose overseen by his brother and attorney general, Robert Kennedy.

The Castro regime beginning in 1959 sent armed expeditions to Panama, Haiti, Nicaragua, Venezuela and the Dominican Republic to overthrow their governments. This destabilizing policy led a two thirds majority of the 21 states of Latin America voted to expel Cuba from the Organization of American States on February 14, 1963.   A cache of three tons of weapons was found on a Venezelan beach in November 1963 that was to be used to disrupt the democratic elections there.

It can be argued that the efforts of the United States beginning in the Ford administration to normalize relations with the Castro regime, that were then accelerated and intensified during the Carter administration, contributed to weakening this hemispheric consensus and ironically opened the way for the Castro regime not only to overthrow a right wing dictator in Nicaragua installing a Marxist-Leninist regime there but also to a strange alliance with the right wing dictatorship in Argentina that at the time was "disappearing" 30,000 leftists.

This policy of détente was rejected by the Reagan administration in 1981 but would reassert itself first during the Clinton Administration beginning in 1994 when President Bill Clinton authorized permanent contacts and joint exercises with the Castro regime's military culminating when he shook hands with Fidel Castro in 2000 and opened cash and carry trade with the dictatorship loosening sanctions.  This was done in spite of tightening sanction in 1996 following the Brothers to the Rescue shoot down. This new period of engagement coincided with the rise of Hugo Chavez and reversals of the democratic gains made in the 1980s and early 1990s. During the George W. Bush Administration the cash and carry trade continued as did the joint military exercises. Even though in 2003 in the aftermath of the Black Cuban spring in which 75 dissidents were jailed following show trials the Bush administration responded by tightening sanctions limiting travel by Cuban exiles to Cuba and remittances. Despite this under the Bush Administration the United States became the fifth leading trade partner with the Castro regime in 2008.

Incidentally, it was in September of 2008 when Mr. Vivanco along with another Human Rights Watch colleague were both expelled from Venezuela.  Unlike the Castro regime, Hugo Chavez despite having normal trade relations with the United States was still playing the victim card as does Nicolas Maduro now. Both strong men have relied on the Cuban intelligence service and a large Cuban presence to prop up their regimes.

One could argue that it is this policy of engagement and detente with the Castro regime over the years that served to empower other anti-democratic actors in the region with the aide of the Cuban intelligence service and military. These are the gains that are isolating the United States not economic sanctions. It is important to recall that the long term policy goals first enunciated by Fidel Castro on July 26, 1959 continue into the present: "We promise to continue making Cuba the example that can convert the cordillera of the Andes into the Sierra Maestra of the American continent." The Cuban dictatorship has also pursued an ambitious foreign policy in Africa, that in the case of Ethiopia contributed to famine and mass murder, while relations improved with the Carter administration in the 1970s.

If the Obama administration achieves its goal of lifting sanctions on the regime, and as was done by the Bush administration with North Korea, remove Cuba from the list of terror sponsors as part of a political agenda and not improved behavior then not only will the human rights situation in Cuba remain dismal but the human rights situation in the Americas will continue to deteriorate. With all due respect to Mr. Vivanco this promises to be a disaster.
Posted by John Suarez at 11:00 PM