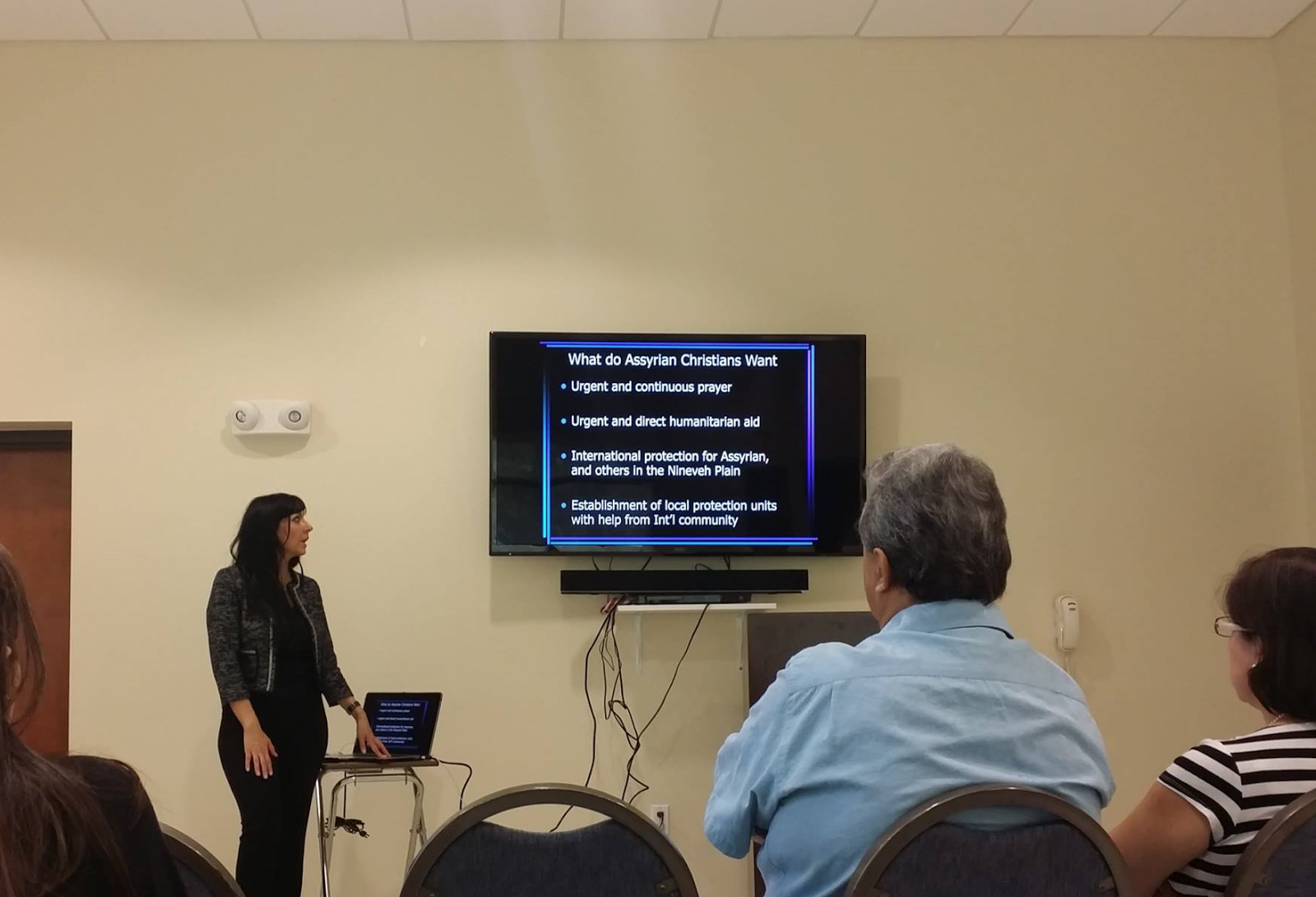 American policy in the Middle East is accelerating the extinction of the oldest Christian communities in the world in what today can legitimately be described as a genocide. It would not be the first one in this part of the world that has targeted Christians.  Earlier this month Pope Francis observed the 100th anniversary of the Armenian Genocide perpetrated by the Ottoman Empire against Christians. Today at St. Gregory the Great Catholic Church in Fort Lauderdale listened to the powerful testimony of Juliana Taimoorazy, founder and president of the Iraqi Christian Relief Council on the plight of Christians in Iraq over the past 1,400 years and the present crisis with the rise of ISIS (Islamic State of Iraq and Syria). Christians are being slaughtered, Church's burned and destroyed, and entire communities displaced. In a decade there may be no Christians left in Iraq. Western governments have, for the most part, been indifferent to their plight. This is a humanitarian crisis that you can do your part to remedy with solidarity. What do Assyrian Christians want?
During her presentation, Juliana, screened the short film, Sing a Little Louder, that reenacts what happened when a train shipping human beings to the death camps in Nazi, Germany stops near a Church while Mass is being held and the cries from the cattle cars are ignored as the pastor calls on those attending mass to sing louder to drown out the cries of help and how decades later, an old man remains haunted by the indifference shown that day to human suffering. A powerful film that is extremely relevant with past and ongoing genocides.On this same day videos were released showing two groups of Ethiopian Christians were executed in Libya by ISIS.

Taking into account the indifference of Western governments and the extreme and genocidal nature of ISIS there is an opportunity to confront this challenge nonviolently ( not to be confused with passivity) and achieve better results against the most ruthless and violent regimes. A systematic study of  nonviolent resistance and its successful application has been provided by scholars such as Gene Sharp and Erica Chenoweth. Chenoweth's quantitative analysis comparing nonviolent action over the past century with violent action against different types of regimes finds that nonviolent resistance is more effective against the most extreme and violent regimes than violent resistance. Furthermore a review of what has led to the present state of affairs in the Middle East finds that the cycle of escalating violence with foreign interventions has led to the present predicament. In extreme situations such as Syria nonviolence was able to frustrate even the most brutal and violent dictators, but violent resistance only empowered them.

Greasing the path to genocide
In early 2003 prior to the start of the Second Persian Gulf War on March 19 of that same year a debate raged over the consequences of invading Iraq and overthrowing Saddam Hussein's cruel dictatorship. Wayne Allensworth, a contributor to Chronicles: A Magazine of American Culture, outlined the dangers of an American invasion to the Christian communities in Iraq:


Iraq's Christians fear that they will be the first victims of a war that might dismember the country, unleashing ethnic and religious conflicts that Baghdad had previously suppressed. Tariq, a Christian merchant in Baghdad, told the French weekly Marianne that "If the United States goes to war against our country . . . [t]he Wahhabis and other fundamentalists will take advantage of the confusion to throw us out of our homes, destroy us as a community, and declare Iraq an Islamic nation!" If recent history is any indication, Tariq has cause for concern: The Shiite uprising in southern Iraq during the Gulf War-encouraged and then abandoned by Washington-targeted Christians.

Senator Barack Obama wrote a letter to Secretary of State Condoleezza Rice on September 11, 2007 expressing concern "for Iraq's Christian and other non-Muslim religious minorities who appear to be targeted by Sunni, Shiite, and Kurdish militants." The then Senator from Illinois and future President continued writing: "The severe violations of religious freedom faced by members of these indigenous communities, and their potential  extinction from their ancient homeland, is deeply alarming in light of our mission to bring freedom to the Iraqi people." Under the "democracy" erected by the Bush administration in Iraq, Christians who had been present there since the time of Christ faced extinction.

On January 11, 2008, Senator Obama received a response from the State Department to the concerns raised in his letter of Christians being targeted in Iraq which downplayed the plight of Christians in Iraq:


Iraqis from all ethnic and religious communities suffer from the sectarian and general violence in Iraq. While it is true that in some cases religious minorities, such as Christians, are targeted due to their religion, the threat to Iraq's religious minorities is not unique to them; Shi'a in Sunni majority areas face much the same situation, and vice versa. In fact, Muslim citizens generally who do not support the actions of militants within their region are subject to similar threats. The assassination in Anbar of Sunni Sheikh Abdul Sattar Bezia al-Rishawi, who rejected extremist ideologies and sectarianism, and the murders of associates of the Shi'a Grand Ayatollah Ali al-Sistani are recent examples of how violence impacts all of Iraq's communities, not just Christians or other non-Muslims.

In the same letter the State Department cited the "difficulty of compiling accurate data in Iraq" as an explanation as to why it could not determine if there was disproportionate violence against a particular population. In 2009 Human Rights Watch provided detailed information on the persecution and murder of Christians and other religious minorities in Iraq.  By 2010 columnist Patrick J. Buchanan, a critic of the Iraq war, in an essay titled "The Murderers of Christianity" provided the following data:


Estimates of the number of Christians in Iraq in 2003 vary from 800,000 to 1.5 million. But hundreds of thousands have fled since the invasion. Seven of the 14 churches in Baghdad have closed, and two-thirds of the city’s 500,000 Christians are gone.

Calls in 2008 for the protection of the Christian remnant in Iraq went unheeded. Unfortunately, President Obama upon entering office in 2009 adopted the Bush administration's inattention to Iraqi Christians.  During the Bush presidency nearly a million Christians fled Iraq. The number under the Obama presidency has risen to more than 1.26 million.

Will you stand up and speak for persecuted Christians?

Juliana Taimoorazy, founder and president of the Iraqi Christian Relief Council, will be speaking in South Florida this week: