"The noblest way to avenge an insult is not to imitate he who has offended us." - Jorge Manuel Valls Arango 1933 - 2015: Requiescat in pace

Jorge Valls, a poet and former Cuban prisoner of conscience who had unjustly spent 20 years and 40 days in a Cuban prison passed away last night in Miami. He'd fought against two dictatorships and in favor of human rights and dignity and paid a heavy price for being a free man with a conscience.   He explained what happened below.


Like Mr. Castro, I wanted a radical change in Cuban society, but I also knew that authority would never become legitimate unless the pure power of violence was submitted to reason, and strict respect for individual rights was guaranteed.

Without civil rights, the best intentions turn into a trap, and societies become prisons and asylums. There is a danger that we become as alienated and as fierce as the evil we think we are fighting.

That is what happened in Cuba under the Castro regime. In 1964, I was convicted of "conspiracy against the state," because I testified against the Castro government in a political trial, and I spent 20 years and 40 days in jail. I don't regret my time there, because I was defending this essential respectability of the human person.

Six years ago in 2009, Jorge Valls sat down and gave an interview in which he discussed his life, human rights and Cuba. It is available online here. In 2013 at a gathering of poets at an event called "Disobedient Poetry" he gave a reading from his collection of poems written from prison between 1967 and 1970 titled Donde estoy no hay luz y está enrejado (Where I am there is no light and there are metal bars).  Jorge Valls was also interviewed in the 1987 documentary on the human rights situation in Cuba titled, Nobody Listened giving a powerful testimony. 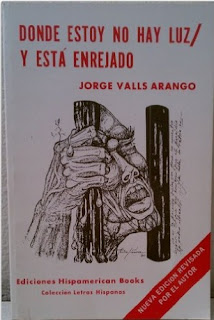