The hypocrisy of the United Nations reaches a new level

The Castro regime has a record that stretches back decades of threatening, brutalizing and murdering women who speak their minds and demand that human rights be respected in Cuba. Back on September 17, 2013 Panam Post published an OpEd explaining how the Castro brothers get a pass for terrorizing and killing women. Unfortunately the situation has gotten worse and since the December 17, 2014 announcement of normalized relations between Cuba and the United States has been accompanied by new accounts of regime violence against women in Cuba that have escalated in severity while at the same time the international community has been complicit in its silence.

Sirley Ávila León, an ex-delegate of the People’s Assembly (Poder Popular) of Majibacoa who joined the democratic opposition after she was driven out of her position trying to keep a school open in her community. Official channels ignored her and when she went to the international media she was removed from office. Following escalating acts of repression by state security the mother of two, Sirley Ávila León, age 56, was gravely wounded in a machete attack on May 24, 2015 at 3:00pm by Osmany Carrión who had been "sent by state security thugs" and that the aggression "was politically motivated." She suffered deep cuts to her neck and knees, lost her left hand and could still lose her right arm. Although Carrión was the principle assailant, his wife threw her hand into the mud compounding the injury. It was a coordinated attack. Sirley was sent home in this critical state without the proper medication. Five months later she remains in need of medical attention, completely incapacitated, demanding justice and denouncing irregularities in the judicial process against her assailant.


On September 2, 2015, the Inter-American Commission on Human Rights requested the adoption of precautionary measures for Sirley Ávila León. "According to the application, submitted to the Commission by the Cuban Democratic Directorate, Ávila has been the object of harassment and threats that materialized in May of 2015, when the proposed beneficiary was the victim of a machete attack because of her work as a defender of human rights. After analyzing the allegations of fact and law submitted by the applicant, the Commission considers that the information reveals that Sirley Ávila León is in a serious and urgent situation, since her life and physical integrity are at risk."

In a democratic country Sirley would be a political leader in government representing her constituents but in Cuba she is a target of brutal repression. UN Women, the United Nations agency that claims that it is "for gender equality and women's empowerment" is promoting Raul Castro on it's twitter stream with the following tweet and image: 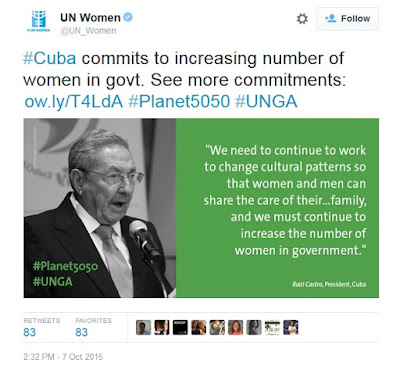 This ignores that the government in Cuba is a totalitarian dictatorship in which the rule of law is non-existent and that since 1959 the ultimate authority has resided in two brothers: Fidel and Raul Castro. Women in Cuban government structures have no real power other than to rubber stamp the decisions of the Castro brothers or face the consequences. UN Women should be helping women like Sirley Ávila León not legitimizing their oppressors.