How did a U.S. Hellfire missile end up in Cuba and why won't the Cuban dictatorship return it?

Last night The Wall Street Journal broke the story that in 2014 an inert US Hellfire missile sent to Europe for a training exercise was wrongly shipped on to Cuba. Since then the United States has been asking the Cuban dictatorship to return the missile but it has not done so. The United States government is still investigating whether the missile's disappearance was an act of espionage or incompetence. 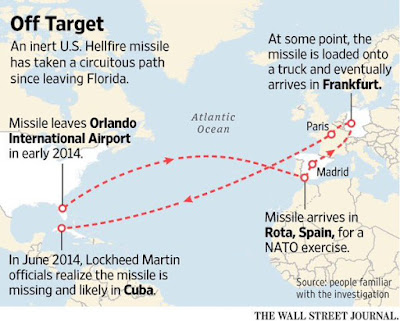 Over the past couple of days this blog has provided background on the outlaw behavior of the Castro regime smuggling tons of weapons, including ballistic missile technology to North Korea in 2013 and drug trafficking over the past three decades. Despite this the United States has removed Cuba from the list of terror sponsors and the Drug Enforcement Agency (DEA) is meeting with the Cuban dictatorship to share information on how to combat drug trafficking.

Unfortunately, this approach is not just confined to Cuba or the current administration in The White House. On April 27, 2014 Lesley Stahl of 60 Minutes reported on a scandal in the story "Who's Minding the Nukes?":


"The entire Air Force chain of command of a missile base responsible for one-third of our land-based missiles was removed a few weeks ago because of a scandal involving drugs and cheating on tests."

Back in August of 2007 a B-52 bomber flew across the central United States with six cruise missiles armed with nuclear warheads that were mistakenly attached to the airplane's wing reported defense officials at the time. Two months later following an investigation the United States Air Force reached the following conclusion reported in the Arkansas Democrat Gazette online edition :


Air Force weapons officers assigned to secure nuclear warheads failed on five occasions to examine a bundle of cruise missiles headed to a B-52 bomber in North Dakota, leading the plane's crew to unknowingly fly six nuclear-armed missiles across the country. The Air Force said it would punish 70 airmen involved in the accidental flight following an investigation that found widespread disregard for the rules on handling such munitions. "There has been an erosion of adherence to weapons-handling standards at Minot Air Force Base and Barksdale Air Force Base," said Maj. Gen. Richard Newton, the Air Force deputy chief of staff for operations.

Whether this latest episode was the result of an act of espionage by Cuban state security, the incompetence of U.S. officials or a combination of the two needs to be investigated and the truth ascertained. However, placing this incident within the larger context outlined above gives cause for even greater concern and the need for far reaching reform in the military-industrial establishment.

Tonight I mourn and pray for my country while recalling the words of Edmund Burke from 1775 with reference to England then and its newfound relevance to the United States in 2016: "A great empire and little minds go ill together."