The struggle for a free Cuba has been a long affair with different episodes and different approaches.
Between 1959 and 1966 there had been a violent resistance to the Castro regime that carried out armed landings (1961); guerilla uprisings (1961 - 1966) that according to Carlos Alberto Montaner "lasted until approximately 1966, when the last foci of peasant guerrillas on the central mountains were exterminated." Many of the participants in the Anti-Castro armed struggle had first been members of Castro's July 26th Movement, who had fought in good faith to rid Cuba of the Batista regime with the aim of a democratic restoration. These Cubans returned to fight in the hills when it became obvious that the Castro brothers were imposing another and more brutal dictatorship.


On January 28, 1976 a candle was lit in Cuba and a new type of struggle for freedom initiated when Ricardo Bofill together with Marta Frayde at her home in Havana founded the Cuban Committee for Human Rights. Carlos Alberto Montaner described how this movement came into existence during a speech in 2009 in Madrid, Spain:


Finally, in 1976, half a dozen Cuban opposition actvists with leftist backgrounds were summoned by professor Ricardo Bofill [3] and founded in Havana the Cuban Committee for Human Rights, the first political organization in the nation's history to expressly renounce violence as a method of struggle. The group decided to abide by the rule of law to reclaim the rights quashed by the dictatorship. Meanwhile, in exile in Washington, about the same time, Mrs. Elena Mederos, former minister in the revolutionary government, and activist and political scientist Frank Calzón, founded Of Human Rights with the same objective: to defend, by nonviolent and legal means, persecuted individuals, dissidents and political prisoners in Cuba.


In 1982 at the Combinado de Este prison Gustavo Arcos Bergnes and his younger brother, Sebastián Arcos Bergnes, joined the Cuban Committee for Human Rights. The brothers had been imprisoned in 1981 for trying to leave the country illegally. Soon thereafter, the Committee began to send out proclamations denouncing the deplorable conditions in which political prisoners were kept.

Shortly after his release from prison in 1988, Gustavo Arcos succeeded the committee’s executive director, Dr. Ricardo Bofill, who was forced into exile.

In 1990, against the protests of many Cuban exiles, Gustavo Arcos issued a statement to Castro asking him to convene a "National Dialogue," which would include all segments of Cuban society, on the island and in exile. During his address to the Worker's Congress on January 28, 1990, Castro issued his response noting that "the Cuban people" will take care of those activists.

On March 5, 1990 government sponsored mobs attacked Sebastian Arcos's home. On March 8 another mob, led by future Foreign Minister Roberto Robaina, attacked Gustavo's home. From exile, many old friends asked Gustavo to dissolve the Committee to save the activists' lives. Gustavo replied: "The Cuban Committee for Human Rights will continue its work, even if it costs us our own lives...no terror, nor propaganda will be able to deter the development of humanistic ideas in our country."

On January 13, 1992 the executive board of the Cuban Committee for Human Rights again issued a statement reaffirming their commitment to nonviolence and calling for dialogue:   "Violence is not and cannot be the solution to our problems... We will not tire from insisting that the only possible solution is civilized discussion of our differences. This is an appeal to Cubans for wisdom and common sense... No act of violence is justified... Let us say no to violence and learn to live in peace."

Gustavo Arcos Bergnes, Sebastián Arcos Bergnes and Jesús Yanes Pelletier were arrested at their homes in Havana on the evening of 15 January 1992. Both Gustavo and Yanes Pelletier were released after approximately 24 hours. However, Sebastian Arcos Bergnes was charged with "enemy propaganda" and "inciting rebellion," he was sentenced to four years and eight months in jail. He was transferred to Ariza Prison in  Cienfuegos Province,  more than 130 miles from Havana, where Sebastian was imprisoned alongside dangerous criminals and was systematically denied medical attention. In 1993 the regime offered him a deal: Sebastian would be released immediately if he only agreed to leave the island for good. Sebastian rejected the deal, becoming the first documented case of a political prisoner choosing prison in Cuba over freedom in exile.

After an international campaign that included his designation as an Amnesty International prisoner of conscience and a request by France Libertés, the organization founded by former French first lady Danielle Mitterrand, Sebastian Arcos was released in 1995. A few weeks after his release, Arcos was diagnosed with a malignant tumor in the rectum, for which he had previously been denied medical care in prison. After a Cuban doctor was fired from his post for treating Arcos, he traveled to Miami for further care.

Due to his worsening health in his last years Gustavo Arcos lowered his profile and ceded much of the work to exiled members of the Cuban Committee for Human Rights. Nevertheless, he met with US Senators visiting Cuba in 2000, with former President Carter in 2002 and signed a letter in 2003 denouncing the unjust imprisonment of 75 Cuban dissidents imprisoned in the Black Cuban Spring.

In the 2005, Associated Press article, Anita Snow reported that he stayed in touch with other dissidents and spoke "frequently with Oswaldo Paya, a devout fellow Roman Catholic who led a signature-gathering effort called the Varela Project, which sought a referendum asking voters if they favored civil liberties such as freedom of speech and the right to business ownership." The article concluded with Gustavo's concern that he would not live to see the return of democracy saying : "I do hope I will see the end of this, but I'm not sure if I will.

Gustavo Arcos passed away in Cuba on August 6, 2006. Martha Frayde passed away in Spain on December 4, 2013. Ricardo Bofill remains in exile in Miami, Florida and an active member of the Cuban Committee for Human Rights.

This nonviolent approach would endure and grow into a nationwide movement across Cuba and write new chapters in Cuba's history of resistance to tyranny. Today we remember the activists who forty years ago initiated this new, and nonviolent struggle for a free Cuba with the Cuban Committee for Human Rights. 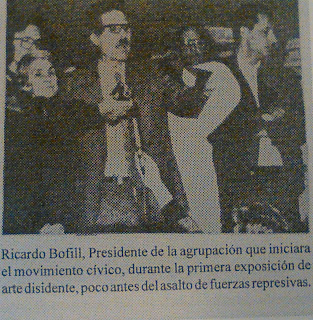