"To forgive is not to forget. The merit lies in loving in spite of the vivid knowledge that the one that must be loved is not a friend. There is no merit in loving an enemy when you forget him for a friend." - Mohandas Gandhi 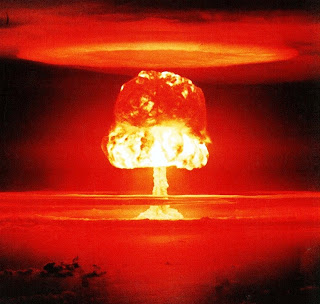 Clinton Policy Fail on North Korea
On January 6, 2016 North Korea announced that it had detonated a hydrogen bomb. This wasn't supposed to happen. On October 18, 1994 President Bill Clinton announced to great fanfare that his administration had achieved a long term objective for the United States in an agreement with North Korea: "an end to the threat of nuclear proliferation on the Korean Peninsula."  North Korea cheated on its deal and announced on October 9, 2006 that it had conducted its first underground nuclear test.

Boneheaded political calculations are a bipartisan affair. In October of 2008, the Bush Administration took North Korea off the list of state sponsors of terrorism in the hopes that it would “salvage a fragile nuclear deal” by appeasing the totalitarian regime. George W. Bush was continuing the policy set by Bill Clinton. This approach continued to be a failure and on  May 25, 2009 North Korea conducted a second underground test with an explosion that was the equivalent to U.S. bombs dropped on Hiroshima and Nagasaki, Japan, in 1945.  North Korea had also tested a long-range missile in April of 2009.  In 2013, North Korea conducted a third nuclear test claiming to have miniaturized the bomb in order to place it on a long range missile with ability to reach the U.S. mainland.

Cuba caught smuggling ballistic missile technology to North Korea (2013)
Wired magazine today claimed that North Korea does not have "a delivery vehicle" to launch a nuclear weapon at the United States. This leads to an obvious question that the Obama administration and the Cuban government would prefer not be asked. If North Korea testing an H-bomb is a big deal as The Washington Post and much of the world has demonstrated with their reaction, then why is Cuba violating international sanctions in order to smuggle ballistic missile technology to North Korea being ignored? The Cuban government was caught red handed on July 15, 2013 providing technology that could aid North Korea's efforts to develop a delivery vehicle to drop their nuclear weapons on the United States mainland.  This was confirmed by a March 6, 2014 report by a panel of experts for the United Nations Security Council that reported:


6. In addition, various parts for three SA-2 and six SA-3 missiles were in the cargo, such as the nose cones housing proximity fuses, auto-pilots and transponders, transmitter antennas and some actuators (figure 4). 4 __________________ 4 The Panel notes that some of the SA-2 and SA-3 parts could also meet the criteria defined in the list of items, materials, equipment, goods and technology related to ballistic missile programmes (S/2012/947), whose export and import by the Democratic People’s Republic of Korea are prohibited. See in particular the Category II, Item 9 of S/2012/947 covering “instrumentation, navigation and direction finding”

Back in 2010, Fidel Castro reappeared warning of a possible nuclear conflict between the United States and Iran. Left out in the media coverage surrounding the story were the two times, once in 1962 and a second time in the early 1980s, when Fidel Castro lobbied the Soviet Union to launch a nuclear first strike on the United States. We now know that the Castro brothers have been assisting their North Korean allies by smuggling tons of weapons in violation of international sanctions.

On September 15, 2015 Reuters reported that North Korea had announced that "its main nuclear complex was operating and it was working to improve the 'quality and quantity' of weapons which it could use against the United States at 'any time.'

Cuba and North Korea: Close Allies
Meanwhile the two communist regimes have not only remained close allies with high profile diplomatic encounters but also share a lot of similarities in terms of health care claims, treatment of their nationals overseas not to mention their extreme hostility towards the United States.

Recipe for failure in North Korea and Cuba
The Obama administration like the Clinton and Bush administration did before with North Korea is now seeking to reach an accommodation with Cuba treating it as a normal regime while ignoring its abnormal nature. This is a recipe for tragedy and disaster that is being played out in North Korea today. If President Obama wants a crystal ball to look at what the legacy of his Cuba policy will be then all he has to do is look at President Clinton's legacy in North Korea.
Posted by John Suarez at 1:59 AM