"Want of foresight, unwillingness to act when action would be simple and effective, lack of clear thinking, confusion of counsel until the emergency comes, until self-preservation strikes its jarring gong–these are the features which constitute the endless repetition of history.”- Winston Churchill, May 2, 1935 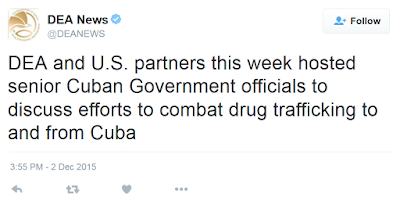 Since January 2015 a high ranking Venezuelan defector, Captain Leamsy Salazar, has been in the United States and is serving as a key witness for the DEA and federal prosecutors. El Nuevo Herald reported that Salazar has identified Diosdado Cabello, head of Venezuela's National Assembly, as the leader of the infamous drug-trafficking organization, "Cartel de los Soles". Moreover, he revealed Cuba's role in the Cartel's narco-trafficking operations, particularly regarding transshipment to the United States.
Wikileaks revealed that the United States and Cuba, since at least 2009 have been "cooperating" on drug trafficking. Fox News Latino has published favorable reporting on this relationship as recently as January 12, 2015. Unfortunately, the experts cited in news reports regarding the drug problem in Cuba and the regime's relationship to the international drug trade bears no resemblance with reality. The State Department in its 2014 country report on Cuba repeats these claims that ignores that the Castro regime has a decades long track record of involvement in international drug trafficking.

A brief and partial overview


On January 27, 2015 the Spanish newspaper ABC reported that the Castro regime, in collaboration with Venezuela, was providing protection for drug traffickers traveling between Venezuela and the United States. According to news accounts the son of the Cuban ambassador to Venezuela, Germán Sánchez Otero, was using PDVSA planes to smuggle drugs with the United States as the final destination.

In July 2001, Madrid's TV Channel 5 broadcast Cuba and Drug Trafficking. Spanish journalists filmed (with hidden cameras) their dealings with drug dealers in Cuba. "As to security, forget it. I pay here for the security; I answer only to one, the government,'' the drug dealer said.

In 1996, Jorge Cabrera was charged with importing 6,000 pounds of cocaine. At the time of his arrest, The Herald reported that Cabrera was carrying a photo of himself with Fidel Castro. Cabrera made a $20,000 donation to the 1996 Democratic presidential campaign after being approached in Havana in 1995 by anti-embargo activist Vivian Mannerud.


In a 1991 Frontline documentary, Cuba and Cocaine, U.S. Coast Guard Lt. Commander Jeff Karonis, stated, "We would observe in the middle of the day an air drop going on inside Cuban waters. The scenario would be for a small twin-engine airplane with maybe 1,000 to 2,000 pounds of cocaine to fly over Cuba, drop the drugs to a predesignated rendezvous point to several boats. Then it would exit back down off Cuba, and many times a Cuban military vessel would be in the immediate vicinity, right on scene with them.''

According to the 1989 indictment, Reinaldo Ruiz was allowed to land planes in Cuba to refuel after dropping drug cargo off the Cuban coast. Drug-smuggling motorboats would come from Florida to pick up the cargo, and Cuban Coast Guard radar monitored U.S. Coast Guard cutters to help the smugglers evade them. The indictments demonstrated the foolishness of sharing intelligence on drug operations with Havana.

In 2014 Juan Reinaldo Sanchez who served as a bodyguard to Fidel Castro for 17 years published a book of memoirs "The Double Life of Fidel Castro." He passed away a year after releasing the book. In the book Reinaldo Sanchez described a meeting in 1988 between Fidel Castro and his Minister of the Interior, General José Abrantes in which Castro asked the recording equipment be turned off:


The interview seemed to go on forever . . . one hour went by, then two. And so, as much out of curiosity as to kill the time, I put on the listening headphones and turned Key No. 1 to hear what was being said on the other side of the wall. Their conversation centered on a Cuban lanchero (someone who smuggles drugs by boat) living in the United States, apparently conducting business with the government. And what business! Very simply, a huge drug-trafficking transaction was being carried out at the highest echelons of the state. Abrantes asked for Fidel’s authorization to bring this trafficker temporarily to Cuba as he wanted to have a week’s vacation in his native land, accompanied by his parents, in Santa María del Mar — a beach situated about 12 miles east of Havana where the water is turquoise and the sand as fine as flour. For this trip, explained Abrantes, the lanchero would pay $75,000 — which, at a time of economic recession, wouldn’t go amiss . . . Fidel was all for it.

According to the U.S. indictment of Panama's Manuel Noriega, the Panamanian strong man traveled to Cuba in 1984 after Fidel Castro offered to mediate a disagreement between the drug cartel and Noriega.

On March 1, 1982 the Castro regime was placed on the list of state sponsors of terrorism less than three months after the US State Department confirmed that the Castro regime was using a narcotics ring to funnel both arms and cash to the Colombian M19 terrorist group then battling to overthrow Colombia’s democratic government. In 2001 at Georgetown University when I questioned General Barry McCaffrey, who at the time was advocating sharing intelligence on drug trafficking with the Castro regime, about this relationship between Cuba and Colombia's drug trafficking guerrillas, he recognized it and expressed his concerns. Despite this admission he continued to argue for sharing drug intelligence with the Cuban government.

The United States government looks the other way
During General Manuel Noriega's trial information emerged  in 1992 publicly implicating the Castro regime as the Sun Sentinel reported at the time:


"Federal prosecutors say Noriega traveled to Havana to ask [Fidel] Castro to mediate a potentially deadly dispute with top members of Colombia`s Medellin cocaine cartel. They say the cartel chiefs were upset because a major drug lab had been seized in Panama despite payment of millions of dollars in protection money to Noriega. According to the Noriega indictment, Castro negotiated a peace accord between the cartel and Noriega at the 1984 meeting. The allegation forms a cornerstone of the racketeering and drug trafficking charges against Noriega."

At the same time convicted cartel leader Carlos Lehder directly implicated Raul Castro and U.S. fugitive Robert Vesco "to route cocaine flights through Cuba." Two years later, a federal indictment listed General Raul Castro as part of a conspiracy that smuggled seven and a half tons of cocaine into the United States over a 10-year period but the Clinton administration overruled prosecutors.

This is the regime that the United States is normalizing relations with and this is the man that President Obama shook hands with. This is a foreign policy disaster decades in the making.