Venezuela 2017: Grabbing up opposition leaders in the dead of night while international community denounces Maduro

"Truth and love must triumph over lies and hatred." - Vaclav Havel 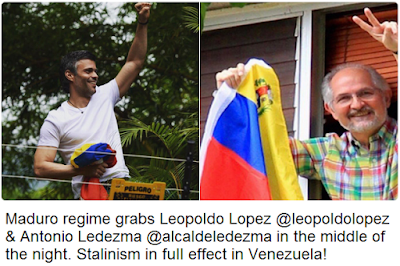 Tonight agents of the Maduro regime in Venezuela raided the homes of Leopoldo López Mendoza and Antonio Ledezma took them away into the night their whereabouts unknown at this hour. Family members are extremely concerned and hold the government responsible. Leopoldo's wife tweeted "12:27am: Moment when dictatorship kidnaps Leopoldo in my house. They will not break us!" along with video of the arbitrary detention.

The knock on the door in the middle of the night to disappear political dissidents was a feature of Stalinism in the Soviet Union during the first half of the 20th century. Bolivarian socialism of the 21st Century bears a close resemblance to this dark chapter in human history.

There is an existential struggle for civilization in Venezuela and the choice is clear: truth and love or lies and hatred.  The Maduro regime is engaging in massive lies to consolidate its dictatorship and seeks to provoke the opposition to violence by sowing hatred through brutal violence and repression.  Snipers shooting high school and college kids in the head because they are engaging in nonviolent protest. This has been going on for years.  Local beauty queen Génesis Carmona (age 22 ) nonviolently expressing her desire for a better Venezuela was shot in the head on February 18, 2014 by agents of the Maduro regime and died a day later on February 19, 2014. These are provocations that enrage those with a sense of justice.

Around the world today the dictatorship in Venezuela was put on notice rejecting Sunday's fraudulent vote on the question of a Constituent Assembly and the escalating violence and repression against nonviolent protesters and independent media outlets.

What can we do? First echo the messages of the democratic opposition emerging out of Venezuela, translating it into different languages to magnify the effect. Secondly share the statements denouncing the Maduro regime's fraudulent Constituent Assembly in Venezuela and international solidarity with Venezuela's democratic opposition. The following countries refuse to recognize the results on Sunday of the vote in Venezuela: Argentina, Brazil, Canada, Chile, Colombia, Costa Rica, United States, Guatemela, Honduras, Mexico, Panama, Paraguay, Peru, Uruguay, Germany, Spain, France, Norway, United Kingdom, Switzerland, and the European Parliament. 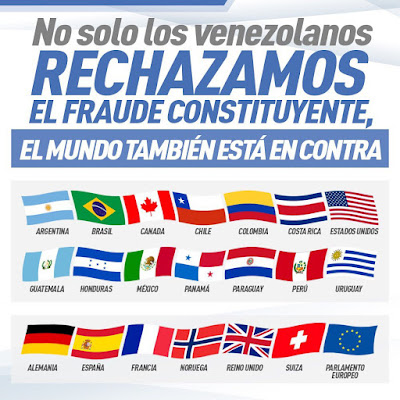