These are desperate times in Venezuela with an imploding economy, political violence and a regime bent on consolidating an already brutal dictatorship. Today the illegitimate Constituent Assembly that Maduro and his lackeys have granted supreme powers over all other branches of government began to rewrite the 1999 constitution. It was "elected" last weekend in balloting marred by regime organized violence and tampering with the vote. Among its 500-plus-members are Maduro's wife and son, and is led by Delcy Rodriguez, Maduro's former foreign minister.  At the time of the writing of this blog the Mayor of Metropolitan Caracas Antonio Ledezma was returned to house arrest after being grabbed up in the middle of the night, on early Tuesday but opposition leader Leopoldo Lopez remains jailed along with 600 other political prisoners.

There are voices gaining traction in Venezuela making the argument that violent resistance is now necessary to deal with the new political reality in the country. A century of data and the recent examples of Libya and Syria indicates that they are mistaken.

Furthermore, among some Venezuelans, there is the mistaken idea that Cubans did not fight against the imposition of communist rule in Cuba. Cuban author and artist Juan Abreu who advocates violent resistance in Venezuela also does not sugarcoat the difficulty nor the fact that Cubans failed to overthrow the Castros despite a formidable armed resistance because the communists are experts in violence and torture:


As I told you yesterday, Venezuelans, about civil war, that monstrous thing, I should be honest with you; that war guarantees you nothing. I should also warn you that you are going up against an organization made up of assassins who are the most sadistic and brutal on this planet. You should know that in Cuba there was a civil war as well. When the Castros came to power, Cuban citizens organized a formidable armed resistance in the cities and in the mountains. A failure. It was laid to waste.

You Venezuelans should know that the thugs of the Castro secret police (who are directing the repression against you Venezuelans) are brutal assassins and merciless. You should take into account that if you do confront them, there will be blood and death.
All I will say is that one of the methods used by the Castro DSE (the G-2 back in those days) consisted of tying anti-Castro insurgents by their feet to the back bumper of an automobile and dragging them through coral rock on the Cuban coast until all that was left was an unidentifiable mass of human flesh. I am mentioning just one of the atrocious tortures among the many atrocious torture methods used by the killing machine of the Castro repressive organs that you will be going up against.

The Castro enemy is barbaric and cruel. Yes, that is even more reason to kill them, I agree. But you should know what you are going up against.

The violent nature of this resistance made it easier for the communist dictatorship in Cuba to consolidate its totalitarian rule and "hermetically" seal the island, reinforcing the regime's false narrative that the opposition were terrorists and mercenaries, but less than a decade later a nonviolent alternative arose with the founding of the Cuban Committee for Human Rights on January 28, 1976 that the Castros could not so easily eliminate.

University Academics Maria J. Stephan and Erica Chenoweth in their 2008 study "Why Civil Resistance Works: The Strategic Logic on Nonviolent Conflict" compared outcomes of 323 nonviolent and violent resistance campaigns from 1900 to 2006 and there study finds “that nonviolent campaigns are more likely than violent campaigns to succeed in the face of brutal repression.”

The usual counter argument is that nonviolence would not have worked against the Nazis but history says otherwise with the successful nonviolent action of the Rosenstrasse protest carried out by German wives who successfully got their Jewish husbands back from the concentration camps in 1943. Nor does one consider the scores of violent actions that failed to dislodge the Nazi regime but only consolidated their rule despite two close calls that nearly got Adolph Hitler in 1939 and 1944.

Hitler was overthrown by the outside intervention of the Allied Powers in WWII that claimed 40 million lives. The troubling question remains what would have happened if more Germans had non-violently resisted the Third Reich, as Mohandas Gandhi had counseled in 1940.

In the case of Libya outside powers led by NATO waged a war that violently overthrew and killed the cruel despot Muammar Gaddafi. Without this outside intervention the violent uprising would have failed. However the rebels that took power turned Libya into a place now described by some as a failed state.

Syria is a cautionary tale that Venezuelans should pay close attention to. Unlike Libya the uprising against Bashar al-Assad was initially nonviolent and despite great provocations maintained a nonviolent posture that successfully placed the Syrian despot on the defensive. Unfortunately when elements of the army joined the opposition to Assad the decision was made, out of the mistaken belief that it would speed up victory, of turning to a violent resistance. On February 5, 2012 nonviolent theorist Gene Sharp gave the following advice to the opposition in Syria:


"Maintain non-violence, do not organise soldiers to use violence against the remaining army. That is suicidal. That becomes a tool - that is what the government would want you to do". ... "Use the mutinous soldiers to persuade the rest of the soldiers also to mutiny - take the army away then the regime will come tumbling down."

In an earlier interview in the United Kingdom on the BBC News program HARDtalk on January 30, 2012 Dr. Sharp said that "using violence is a stupid decision." Sadly that advise was not heeded. The end result has been the escalation of violence and fatalities in a civil war and the consolidation of rule of Bashar al-Assad today and an opposition compromised by violent terrorist elements.
The odds of violent resistance successfully transitioning to a free society are higher than that of nonviolent resistance. However nonviolence is not a magic bullet anymore than violence is. In both a violent and nonviolent struggle success is determined by the side with greater resources and better strategy and tactics. Gene Sharp, a world renowned nonviolence theoretician, offers the following advice:


"You have to learn how to do it skillfully. If you are going to fight a war violently you don't go to all the neighborhood bars and get all the guys out there and say lets go fight a war but thats about the way nonviolent struggle has been conducted over the centuries. People were improvising. They didn't know what the hell they were doing. What would make it effective? What should they be aware of? Who was this guy who was urging violence? They didn't know he was a tool of the political police. This happened in the Russian empire ... and repeatedly. It also happened I am told with the Gestapo doing that. Dictators and rulers who fear the power of people will do their damndest to defeat it and you have to know how to be smarter than they are and more courageous and more skilled in what you do."

These are dangerous and difficult times in Venezuela with a brutal regime aided by the oldest tyranny in the Western Hemisphere, the Castro dictatorship, to consolidate the dictatorship in Caracas. At the same time the vast majority of Venezuelans oppose this government that is becoming increasingly illegitimate and there is an organized opposition. The elements to achieve victory are present but it requires thought, analysis and sustained action.

Those of us outside of Venezuela can demonstrate our solidarity by sharing their communications, providing humanitarian assistance, and standing up in protests of support for the Venezuelan democratic opposition to let them know they are not alone. This Saturday, August 5, 2017 at 11:00am Miami will unite for a free Venezuela at the Torch of Freedom and all people of good will should be there to demonstrate their support. 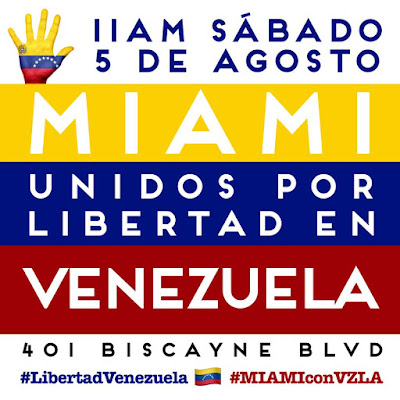