"Truth and love must triumph over lies and hatred." - Vaclav Havel 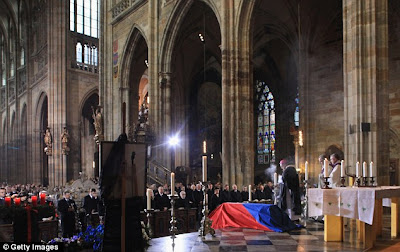 The funeral ended with the Czechoslovak national anthem and Havel´s voice from a recording said his famous motto: "Truth and love must triumph over lies and hatred." 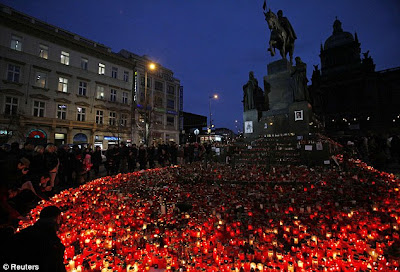 Thousands of candles placed in tribute to Havel in Prague's Wenceslas Square
Havel, is no longer with us, in the physical sense but his words and legacy live on and will continue. David Remnick in the New Yorker on December 18, 2011 offered a reading list titled: Havel and Beyond where he cites the "top ten" hits and cites Letters to Olga and Open Letters: Selected Writings, 1965-1990 as Havel's most important works of non-fiction. In Open Letters Remnick highlights the importance of the essays “Dear Dr. Husak,” “The Power of the Powerless,” and “Anatomy of a Reticence.”

However, of equally great importance are Havel's books Disturbing the Peace: A Conversation with Karl Huizdala published in 1986 while still a dissident in Czechoslovakia, Summer Meditations published in 1993 following the "Velvet Divorce" when the country split nonviolently into the Czech and Slovak republics. Havel would later become the first president of the Czech Republic in January of 1993. Finally, To the Castle and Back published in 2008 offers a look back over the years of the Havel presidency.

The Hannah Arendt Center for Politics and Humanities in addition to highlighting the importance of Havel's The Power of the Powerless essay also cited his important 1990 New Years Address explaining that "[t]his was not a President speaking in platitudes. Havel of course criticized the communists. But his critique was universal, aimed at our entire civilization:"

When I talk about contaminated moral atmosphere … I am talking about all of us. We had all become used to the totalitarian system and accepted it as an unchangeable fact and thus helped to perpetuate it. In other words, we are all — though naturally to differing extremes — responsible for the operation of the totalitarian machinery; none of us is just its victim: we are all also its co-creators.

Many of Vaclav Havel's essays are available online at his official website both in the original Czech and in English. 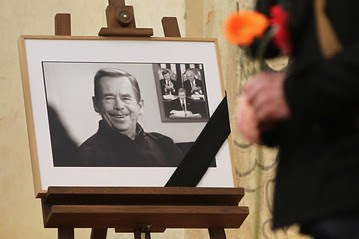